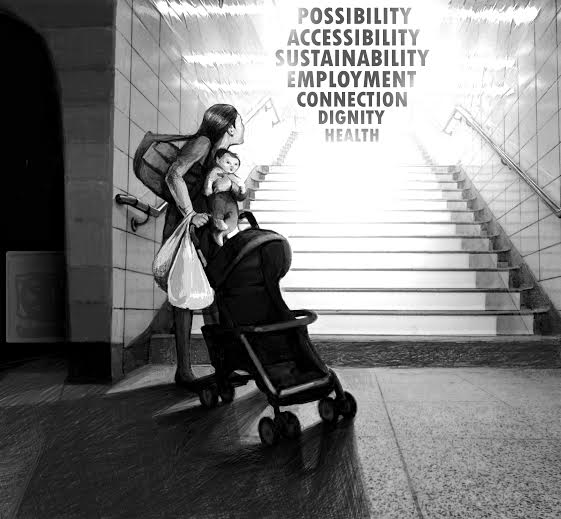 We’ve all done it.

Sighed or even rolled our eyes at a mom with a seemingly Cadillac-sized stroller blocking the streetcar aisle.

If we knew where some of those mothers were headed and the immense effort expended on getting there, we’d likely demonstrate a greater level of patience.

“I went back to work when Jennifer was a year-old; each day I hauled her stroller on a streetcar, the subway, and a bus. The difficult commute was more exhausting than my job.”

April, a young Korean-Canadian single mother represents a group of users for whom public transit is especially challenging. A growing body of research like this one, conducted by Stanford University uncovers the dimensions of commuter patterns and quality of experience for women. Moreover, it unpacks the way that class, age, and family status impact the user experience finding that single mothers of African descent, and also Asian descent, like April face increased barriers to transit and have more “complicated” commute patterns.

Within the context of public transit, the term “complicated” is used to describe the ways that geography, long work commutes, traveling with children, frequent travel, making multiple transfers in a one-way commute creates hardship on transit users. These factors impact everyone, but it is clear why single mothers, solely responsible for supporting their families, running errands, and shuffling their child(ren) between activities would be most adversely impacted.

This is especially problematic because for single mothers public transit is not simply about moving from point A to point B.

“After Jennifer was born I became really focused on making a better life for both of us and public transit played a huge role in realizing that vision. Unfortunately because I’m a young mom, boarding the bus in a poor neighbourhood people treated me horribly.”

While re-calling a laundry list of unpleasant public transit encounters April’s voice begins to crack slightly. There was the young guy who told her to get her “f#$% stroller” out of the way.  Endless stream of passengers who aggressively pushed past her. And then there was the woman who entered her personal space and threatened to shut up her screaming and exhausted baby. These incidents took a significant toll and soon April found herself dreading the daily commute.

“Each morning I mentally prepared myself for the verbal abuse but by the time I got to work I felt horrible — about having to take transit, being a single mother, and imposing on people’s space.”

Also, not entirely unlike commuters with physical disabilities, April endured a number of design and service related challenges. She relied on the goodwill of transit operators and kind commuters to help her lift her stroller up the stairs of inaccessible streetcars and subways without elevators. On countless occasions she was left exasperated at the foot of steep stairwells or waiting in the cold for an accessible vehicle balancing her child, stroller, baby bag, work baby, and sometimes groceries for dinner.

In spite of exceptional work carried out by coalitions like ODA and submissions articulating priorities for greater accessibility in the public realm (including transit), progress has been snail-paced. Given the complexity of capital and infrastructure projects, public transit providers cannot solely bear the responsibility for the situation. Making public transit accessible for everyone requires significant will, expertise and financial investment across levels of government. Moreover, accessibility initiatives are unusually broad in scope. They include projects like getting additional accessible low-floor vehicles on the roads, installing a greater number of elevators and automatic doors, leveling off exterior sidewalks, staff training, and improving customer communications systems.

That said, legislation and debates pertaining to the importance of accessible transit planning, capital projects, and service delivery extend all the way back to the eighties. The slow progress is not only unacceptable, it comes dangerously close to contravening the human rights of people with physical disabilities, a rapidly ageing population, and single moms like April. It confines the most vulnerable members of our community to their homes while forcing others to seek alternative options.

Last winter April could no longer chance the probability of waiting for a couple of vehicles to pass by in anticipation for an accessible one. As an emerging fundraising professional she had clients to meet and although her employer was understanding, her public transit woes were wearing thin.

“I became so anxious about inaccessible streetcars and lack of subway elevators this past winter that I actually spent over $1,000 in cab fare in just one month. It cut into our food and emergency money but I couldn’t keep hoping that a vehicle would be accessible or that someone would help me; my job was at risk.”

The snow has melted giving way to longer, warmer days but single mothers like April are still being left out in the cold when it comes to gender-sensitive and accessible transit planning.