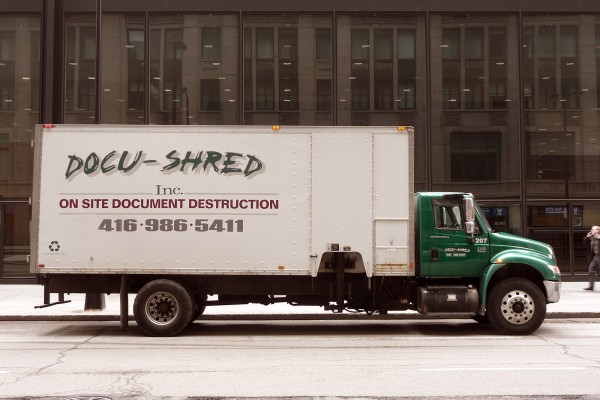 Mayor Tory is trying to tackle Toronto’s $6 billion traffic congestion problem by cracking down on lane-blocking vehicles, but shredding trucks might be immune to the “new normal.”

The City started a campaign in January to target illegally parked vehicles, including courier trucks and shredding trucks, and Toronto Police parking enforcement says that these large vehicles are complying — for the most part.

Councillor Jaye Robinson, the chair of the City’s public works and infrastructure committee, says that shredding trucks have been a “significant problem” in the past. As part of the blitz campaign, they have been ticketing and towing as fast as they can, she says.

But shredding trucks often start their operations knowing that they may be ticketed in the process if they can’t find legal parking. Denis Cordick, vice president marketing of AMJ Shredding, a Toronto-based shredding company, says that it’s just part of the industry.

“Sometimes you have no choice … if you have a big customer for whatever your business is, and you happen to get a … ticket … you as a company decide that we’re just going to eat that because it’s worthwhile,” says Cordick. Based on where these trucks normally park, the ticket fee could be anywhere between $40 and $150.

They have also doubled up on drivers in their trucks so that while one employee picks up documents, the other drives the truck around to avoid tickets and blocking lanes. It eventually has to stop, however, for the shredding mechanism to work, and having at least one driver in the vehicle means the truck can’t get towed. Cordick says that towing hasn’t been a problem for the company since the January blitz began.

According to Brian Moniz, of Toronto Police parking enforcement, out of the more than 3,500 vehicles towed since January, three or four have been shredding trucks. The large, heavy-duty tow trucks required to haul away mobile shredding vehicles could take up to two hours to arrive at the scene.

“I can state that we have seen a great improvement with shredders and courier vehicles, where for the most part they’re not impeding the rush hour routes,” says Moniz, adding, “There are still some issues.”

For the most part, Cordick says, drivers of shredding machines do try to find alternative parking options on side streets whenever they can. “From our standpoint, we don’t want our brand blocking the street. Because the people driving that we’re inconveniencing, they’re not going to be happy with us, either.”

But if they can’t, a $150 parking ticket fine is just the price of business for these shredding companies. Towing is easily avoidable if there’s a second driver, so enforcement or not, mobile shredders might just continue blocking roads if it’s convenient for them and their clients, and if they don’t have other options.

“If they want to continue to violate [by-laws], we can increase the fines again,” says Stephen Buckley, Toronto’s general manager of transportation services. “We can take it up to $300 and they can see if they want to incorporate that in the cost of doing business as well. It’s illegal behaviour and it will be enforced.” Banning the shredding trucks from the roads altogether isn’t an option, Buckley adds, because it would be illegal to prohibit certain classes of vehicles.

Cordick says that a higher parking ticket fee would be billed to their clients, who would have to choose between paying the fine or paying extra hourly rates for the truck to take the documents to an off-site facility. “I think most big companies would say, you know what? The $200 ticket is better than the three extra hours of charges,” he says.

Grant Humes of the Financial District BIA says that shredding trucks have emerged as a necessary tool for many businesses in the area. Mobile shredders destroy on-site confidential documents that companies can’t risk being intercepted. “People have such sensitivity around privacy; the shredding is really important. The trucks are a new phenomenon. They’ve only been around for the last 15 years,” says Humes.

Many buildings used to have their own shredding facilities, but over the years, the service was outsourced to companies like AMJ Shredding and Shred-it, he says. Brookfield Place on Bay Street still offers a confidential shredding service, where tenants can hand in their documents to building facilities, after which it is delivered to an off-site location to be destroyed.

For the many businesses in the downtown core, however, the trucks are convenient. While several clients allow companies to move their trucks to side streets to avoid blocking arterial roads, Cordick says that some demand the shredding happen right at their doorstep, causing traffic back up. “If you do a one-time shred for a law firm, they absolutely might want to see it get shredded,” he says. If there are several years worth of documents to be destroyed, shredding could take days, with the truck having to stay in place for up to eight to ten hours per day.

If they aren’t required to set up shop right in front of, say, the entrance to a skyscraper on Wellington, shredding companies may have other options. The City has expanded its courier loading zones from 13 to 40 in a pilot project. These are side streets around the city on which courier trucks — and shredding trucks, if they’re willing — would be able to park without impeding traffic on arterial roads. Cordick says this would be a viable option if it was convenient and close to the point of document pick up. The expansion is being evaluated, so it’s possible that the new courier zones could shift to accommodate demands from stakeholders.

The City has been co-ordinating with the Canadian Courier and Logistics Association, which represents courier companies like Purolator and FedEx to find solutions. Canada Post announced in January that they would be shifting their delivery times to off-peak hours between 1 p.m. and 3 p.m. and after 7 p.m. to alleviate traffic congestion in the core.

AMJ Shredding’s trucks do off-peak jobs a “small percentage of the time,” according to Cordick. But he says that if the City mandated they do their business at this time, they would comply.

“[Shredding trucks have] been a big part of the problem. Now we’re trying to get them to be a big part of the solution,” says Councillor Robinson. “They might just have to look at adapting their business operations to accommodate the new normal in Toronto.”