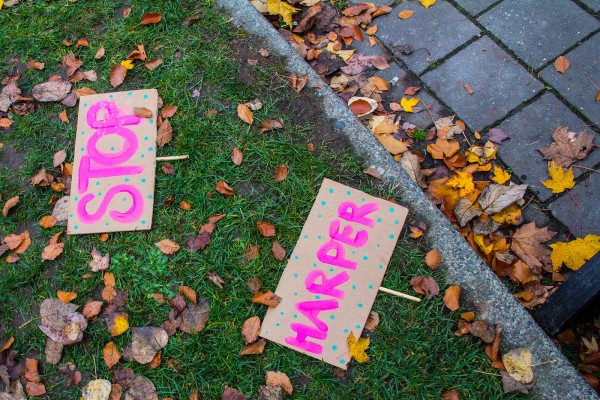 As Stephen Harper’s Conservatives inflict their limbic system politics on voters who are somehow unable to see themselves as pawns in the hands of a gang of nativist demagogues, it seems to me there are two increasingly likely outcomes at the end of this miserable, hate-filled journey:

One, the anyone-but-Harper vote rapidly de-camps from the collapsing NDP and coalesces around Justin Trudeau’s Liberals, producing a minority government.

Two, the Liberals merely swap out a bunch of seats with the NDP while the Conservatives nail down their base and drain enough support from Team Mulcair to win a second majority, or at least a third minority.

In fact, when Harper embarks on his fourth and last term, I also predict he’ll ram through an extremist agenda that will make his policies to date feel like a warm bath. Indeed, the campaign’s hysterical, race-baiting tenor is strongly suggestive of what awaits. If he wins, Harper will have nothing to lose. He will go for broke. It’s legacy time.

I have never in my life experienced a federal race where the antipathy, and the crushing sense of betrayal about what it presently means to be Canadian, has run so high. Four years in, we clearly see not just the cumulative damage of Harper’s incrementalist agenda on our national institutions, but also the shocking wounds inflicted on Canada’s international reputation, and our domestic political and social culture.

It appears Canada can now do hatred with the best of them. We have leaders who fixedly bully a minority of a minority of a minority, and McCarthy-ite MPs who creepily call out “the enemies of Israel.” Dual citizenship, long a point of pride for a country defined by immigration and multiculturalism, turns out to be both provisional and revocable. Meanwhile, we are mocked in the international media for twilight zone promises to weed out “barbaric cultural practices.”

Harper and his war room seem willing to say or do anything to win. Nothing, no matter how appalling, is off limits (except, it seems, the issues that really matter, like the economy and sustainable development). As Calgary mayor Naheed Nenshi, a good-humoured centrist not given to personal attacks, said over the weekend, “This is disgusting and it is time for us to say, stop it.”

Yes, it is. Yet if Harper wins a second majority, we’ll all be implicated in an outcome so many Canadians purport to oppose. Look around you. Look in the mirror: it’s your fault, too. Doesn’t matter if you didn’t vote for the guy.

Why? Because Canadians on the centre-left failed to demand that the two opposition parties find common ground and present a consensus-based alternative to highly frustrated voters. By tolerating their rivalry through a decade of increasingly disturbing Conservative rule – through the census fiasco, the silencing of scientists, the flouting of election laws, the gutting of environmental regulation, the politically motivated foreign policy, the tactically fashioned attacks on refugees, the medieval criminal justices stances, the terrorist fear-mongering, and on and on – we have allowed the NDP and the Liberals to play into Harper’s hand.

Consequently, hundreds of thousands of disgusted voters find themselves in the closing innings of an election confronted by the folly of phoney choice and the problem of the narcissism of small difference writ large on our political structures.

Yes, I am familiar with all the weary old partisan arguments from both camps on why such a merger isn’t possible culturally, ideologically, or organizationally. I know all about the NDP’s pieties and the Liberals’ arrogance. I know who supported Bill C-51 and who didn’t. At this juncture, however, the wedges barely matter. Nostalgia for the heroic era of the CCF or the collaborative era of Broadbent and Trudeau is irrelevant, as are partisan appeals based on which of the two was responsible for this strand of our public policy or that controversy in our shared political history.

All that back-story is now utterly besides the point for the simple reason that in this election, the Liberals tacked sharply left while the NDP tacked sharply right, proving that both parties were competing for the same voting block, i.e., that large mass of Canadians who’ve had it up to here with Harper. The reality is that Mulcair’s NDP, circa 2015, owes less to Tommy Douglas than it does to Paul Martin.

While past ideological shadings may once have been determinative for voters, they are not useful in confronting our present political crisis. Over and over, I hear people fervently opposed to the Conservatives tell me they’ll simply vote based on their best guess as to who’s going to be in the lead a week out, or whomever is assured to win in their own riding.

It’s not so much about strategic voting, but rather a broad expression of exasperation and anger with the consequences of a bifurcated political left. We’re like consumers who’ve moved way beyond the power of brand. We want toothpaste, and it no longer matters to us whose logo is on the tube.

The massive irony here is that Harper was the direct beneficiary of a concerted effort, led in the early 2000s by pundit David Frum and others, to unite the right. After Preston Manning’s Reform Party demolished the pan-Canadian Tory coalition built by Brian Mulroney, the fragmentation on the right provided the structural conditions that allowed Jean Chretien to win three majorities in a row.

It’s important to note that the original actors in the unite-the-right movement came from outside the various party establishments. After all, parties are clannish, competitive, and programmed to gather power into themselves. Outsiders must cajole and shame the Liberals and the NDP into negotiating a viable alternative that has the critical mass and the programmatic appeal to counter a unified right.

If Harper wins another majority by presiding over one of the most appalling election campaigns in Canadian history, we’ll have the conditions in place for a long overdue structural reordering of our political landscape. The two-thirds of voters outraged by such an outcome must insist the parties set aside their historic antagonisms and embark on a merger process.

As this wretched election has amply demonstrated, the status quo is untenable.