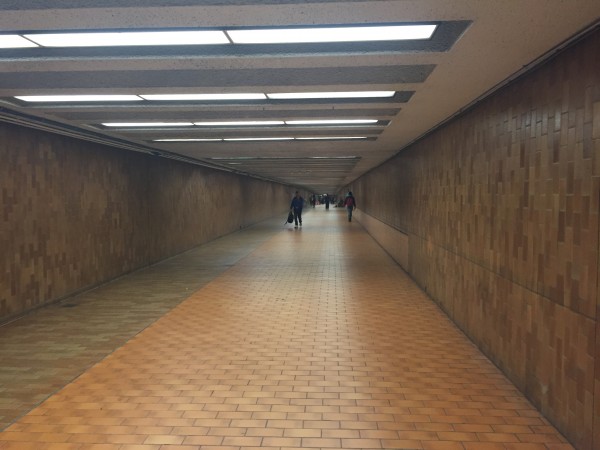 Toronto’s four subway routes are easy to navigate. Trains always run the same routes and there are only five interchange stations. Switching lines is mostly as easy as going up or down a flight of stairs. There are few choices to make and it’s hard to get lost or go wrong on the TTC subway system, most of us take the most efficient path all the time just as a function of simplicity.

The exception is the interchange between the Spadina Line and the Bloor Line. For people travelling south on Spadina then west on Bloor – or the reverse – there are two options, (1) get off at Spadina and walk through the long interstation passageway or (2) go an extra stop to St. George switch quickly and take an extra stop back through Spadina heading west.

There is a large body of academic literature that investigates people’s perceptions of time. This is important for the design and operation of public transportation since waiting feels longer than it is; transit users who spend 5 minutes moving on a bus or train tend to be happier than those who spend 5 minutes waiting at a stop (See here or here for examples (PDFs)).

According to Google Maps it takes 1 minute to travel from Spadina Station to St. George Station by TTC. Given that seconds could make a difference in this comparison I decided to measure it the old fashioned way, with a stop watch. I timed from the ringing of the door chimes at one station to stepping off the train at the next. On average, it took me 1 minute and 40 seconds to travel between St.George and Spadina Stations on the north-south Spadina Line and 1 minute and 4 seconds on the east-west Bloor Line. I also walked back and forth between the platforms at Spadina Station where on average it took me 2 minutes and 24 seconds, measured from platform to platform. I walked with purpose but made sure to never run and I was carrying a bag. The wait time once on the platform is on average half the head time between trains. At rush hour in Toronto that is 1 minute and 10.5 seconds. At St. George Stations I have assumed people would rarely miss a train while going up and down the stairs; I am assuming that if the train is in the station most people run for it so I have ignored the time needed to change platforms at St. George Station.

By my measurement, switching at St. George Station is 20 seconds or 14% slower than taking the walk at Spadina Station. None-the-less, changing at St. George may feel faster to many people; the extra time is spent moving on trains rather than walking through a somewhat drab tunnel. Over the course of a year someone changing at Spadina Station as part of a daily commute would save almost 3 hours.