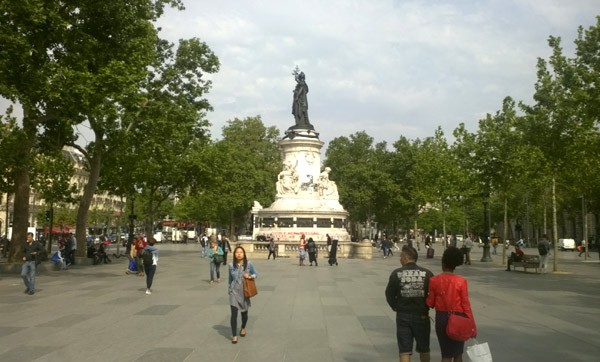 Guest post by Paul Cohen, a professor in the Department of History at the University of Toronto and an occasional contributor to Spacing.

I first learned that something was terribly wrong in Paris while sitting down to dinner with my sister in Toronto, when I received an e-mail from a good friend who lives not very far from our apartment in Paris that “we are all right.”  A joyous family reunion instantly turned into a sorrowful vigil, as we strived long into the night to piece together the horrific sequence of events.

The loss of life in events like these are equally tragic wherever they take place.  Those who object to how quick people in the west are to proclaim that “We are Paris” while remaining indifferent to such dramas when they take strike Beirut or Aleppo or Baghdad are absolutely right.  As intolerant voices in Europe and North America lost no time issuing calls to turn refugees away, we should also remember that it is precisely because they wish to escape horrors like this – and far worse – that millions of Syrians have fled their country.  For it to be a resource for a constructive politics, in harmony with a humanism worthy of the name, empathy cannot and should not be selective.

While this is all true, my sadness these past days has been of a deeply personal nature, focused more on the particular than the universal.  For the second time in a year, the neighborhood where my home of seventeen years is situated was struck by terrorism.  If last January we were just sitting down for an early lunch when the wail of police sirens converging on Charlie Hebdo’s nearby offices pierced the quotidian humdrum, this time we found ourselves an ocean away, worriedly reaching out to neighbors, friends and family in Paris.  It is especially painful to watch such terrible events unfold over familiar and beloved geographies.  When terrorists struck the Bataclan music hall, first responders set up a triage station in front of our local post office.  Our daughter learned to walk in a small park within view of the music hall.  The press published photos of the injured being evacuated in front of the building where our pediatrician’s offices are located.  The 11e arrondissement’s city hall, where my wife and I were married, sheltered victims during the attacks.  The international media have now set up camp just behind our apartment, right where our biweekly outdoor market takes place.

In the short time since the attacks, English-language media have offered a sociological shorthand to describe the neighbourhood where most of the attacks took place, spanning the 10e and 11e arrondissements: hip, “bobo”, the front line for Parisian gentrification, an area of well-frequented bars, restaurants and live music venues.  This too is true.  Anyone familiar with the geography of the attacks shares the same, sickening supposition that the terrorists were intimately familiar with the cartography of eastern Paris nightlife.  In an unfathomable irony, the center-left daily Libération – in whose headquarters, a short walk away from our home, Charlie Hebdo’s journalists sought refuge after last January’s attacks – had just put a front-page story for the following morning’s edition to bed entitled “Bienvenue à hipsterland”, on how the phenomenon drives working-class people from such neighborhoods.  And I am as guilty as anyone in pushing the neighborhood’s ‘boboification’: like many of our friends in the neighborhood, I moved to the 11e in 1998 as a graduate student, stayed on when I became a university teacher, and saw the area change.  Over the years, I shared countless meals at the targeted restaurants, argued about politics or football at the now sadly famous cafés, and enjoyed many wonderful concerts at the Bataclan.  This, I freely admit, should make my testimony suspect, perched on the precipice of mournful narcissism and pathos.

But there is more to the neighbourhood than bobos and bistronomie.  The rising tide of real estate prices has not spared this historically working-class neighborhood, to be sure, and a steady influx of higher income residents since the 1990s has transformed its sociology.  On our quiet street, a motorcycle repair shop has given way to a vintage toy store, a rubber hose and pipe factory recently vacated space now occupied by an Italian designer housewares shop, and a small dentures workshop just gave way to a wine bar.  But public housing (nearly 20 % of Paris’s housing stock) and rent controls have helped make Paris one of the most socially and ethnically diverse urban areas in France.  Teenagers from the two racially mixed public housing projects on our street congregate on weekend evenings for animated conversation.  A kosher Tunisian restaurant does a brisk business serving up Sephardic fare, across from a Chinese print shop that serves the growing local East Asian community.  In the early evenings, grandmothers gather in the same park where television crews are camped out right now to chat in Turkish, Arabic, and Taqbaylit as they watch ethnically diverse groups of kids play football.  Two blocks south, one can browse at an anarchist bookstore; several blocks in the other direction, one can shop in specialist Muslim bookstores.  Several mosques, synagogues and Jewish schools are located within walking distance.  A small congregation gathers each Sunday at a nearby storefront evangelical church.  A bit further afield several Catholic churches celebrate masses in French, Portuguese, Mandarin and Tamil to serve their ethnically diverse parishes.

Social mixity as a process and an ideal can conceal wrenching socioeconomic and symbolic transformations and produce new forms of separation and social domination – as the work of urban geographer Matthieu Giroud, who lost his life at the Bataclan this past Friday, and whose astute analyses will be missed, showed.  But the fact remains that this is a rare kind of place where many different kinds of people live in close, relatively comfortable proximity.  None of the New York and Toronto neighbourhoods I have lived in were as ethnically, confessionally, or socioeconomically diverse.

The far-right-wing Front National party doesn’t do well here.  In the first round of the 2012 presidential elections, their candidate finished in sixth place in the 11e arrondissement, with under 5 % of ballots.  The 10e and 11e arrondissements vote solidly on the left, returning mostly Socialist and Green representatives in national and local elections since the mid-1990s.

The map of the attacks also intersects the local geographies of a still older political history, that of socialism’s origins in France, of workers’ struggles and the labour movement, and of protests against colonial empire.  On the rue de la Fontaine-au-Roi, 150 meters from the restaurant where one of the attacks tool place, is the site of the last barricade to come down during the bloody repression of the Commune of Paris, the 1871 popular uprising animated by democratic and utopian socialist aspirations.  Just up the street stands the Maison des métallos, a grand trumpet factory built in the 1880s that long served as a steelworkers’ union hall (situated just across the street from a mosque).  The café Le Carillon and the Petit Cambodge restaurant are located near the place Sainte Marthe, site of a broad mobilization of neighborhood associations, artists’ and immigrants’ squats in the 1990s to fight off a city-piloted redevelopment scheme which would have leveled the historic neighborhood.  In the other direction, across the Canal St Martin which once ferried heavy barge traffic across a landscape of warehouses and factories, stands the Bourse de Travail, founded by labour unions at the end of the nineteenth century to organize workers, shelter popular education initiatives, and put anarcho-syndicalist principles into action.

Fontaine-au-Roi feeds into the Place de la République, which has long functioned as a Republican agora, a site for political gatherings and public actions of all kinds, to draw attention to pressing problems.  Almost a year ago to the day, French farmers dumped 50 tons of potatoes onto the Place to protest difficult market conditions for their produce.  Last summer, the association Droit au Logement set up a tent on the square where 50 people who had been evicted from their apartments lived for several weeks, to drum up public awareness of the shortage of affordable housing.  Kurds, Sri Lankans and other Paris-based expatriate communities regularly congregate to engage in forms of political speech they couldn’t in their countries of origin.  After last January’s attacks, the enormous stone base of the 10 meter tall bronze statue personifying the Republic as woman became an impromptu monument to the victims, but also a space for public expression, an ever-evolving physical conversation about political community, collective values, and humor as a weapon against horror, an agora built upon graffiti, placards, and Republican ex-votos.

On the boulevard Voltaire stands the Chinoiserie-inspired facade of the Bataclan, built in 1864, whose ecumenical music programming make it one of the world’s great music venues – where Alain Bashung gave one of his last concerts, where Prince regularly gives surprise late-night performances, which became a vibrant centre for French rap, and where the Belle Époque cabaret singer Aristide Bruant sang his poetic ventriloquizing of the working class.  The rue Charonne, where yet another of the blind attacks on a café terrace took place, is the site of a February 1962, Communist-led demonstration against the Organisation Armée Secrète (a clandestine organization of French officers and white Algerian settlers committed to keeping Algeria French who had committed a series of terrorist attacks), which was violently dispersed by the police, leaving 8 dead.  A block away stands the Japy gymnasium, which hosted the first Socialist congress in France in 1899.

Within Paris’s symbolically-charged cartography of public space, the boulevard Voltaire has itself long served as the parade-ground for left-wing demonstrations, the theater for May Day marches, labor protests, and mobilizations in favor of progressive causes.  It is here that half a million people marched against the National Front’s Jean-Marie Le Pen during the 2002 presidential elections, here too that our daughter participated in her first such action, when we joined the nearly 1.5 million who marched after the Charlie Hebdo/Hyper Cacher attacks last January.

Were the terrorists who committed the horrific events familiar with the neighborhood’s historical geography?  It doesn’t really matter, nor do I care to know.  What is certain is that the attackers wished to impose their own nihilistic politics on this place, to negate the struggles and aspirations and joys embodied in the experiences and landscapes of this part of Paris and substitute their own apocalyptic agenda of hate.  Within France and without, cynical opportunists and ideologues lost little time seizing upon these events to legitimate their own sinister projects: Laurent Wauquiez and Eric Ciotti, deputies in former president Nicolas Sarkozy’s party known for their hard-right positions, proposed creating Minority Report-style prison camps for terrorist suspects: “we can no longer wait for them to commit a crime”; an op-ed piece in Le Figaro called for a re-Christianization of France as a response; New Gingrich fantasized about arming concert-going citizenry to avert such disasters.

But the neighborhood, I think, also offers a geography of hope, raw materials with which to reconstruct reason for optimism in this time of mourning and uncertainty in our ailing democracies.  Its landscape, its history and its people serve as reminders that the values and struggles which have marked them – of coexistence in difference, fraternity, liberty, solidarity and social progress – remain, now more than ever, the ones worth fighting for.