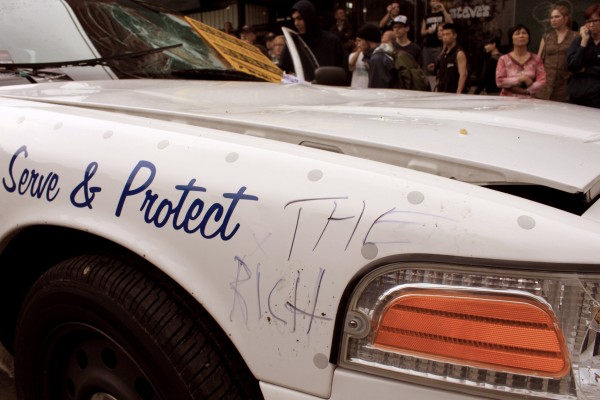 On October 28th, Community Safety Minister Yasir Naqvi released a draft regulation to standardize police street checks in order “to ensure that those interactions are conducted without bias or discrimination, and done in a manner that promotes public confidence and keeps our communities safe.” This regulation seeks to establish a rights-based framework for policing and set out clear rules to govern that notoriously gray area in the Police Services Act: voluntary engagement between the public and police.

Since then, as if on cue, police chiefs and union heads from Hamilton to Toronto have engaged in a campaign of fear-mongering meant to alert us to the perils to public safety (i.e. that criminals would roam free) if the regulation passed. But what is it about the regulation that is causing such distress for the men and women we pay to protect our communities?

I, for one, am very happy to see the police engaging in this very important discussion (the draft regulation consultation period concludes next week). I think it’s valuable to hear their perspectives, given that, for quite a long time, the debate around street checks has been completely one-sided, with police only denying or downplaying any claim of wrongdoing. But I’m also most disappointed by the lack of substance that these senior officers and union leaders have added to the debate.

Now, let’s be honest: the main issue that police chiefs and association heads have with this draft regulation is the fact that it tells them that they will now have to give “rights notifications” to people they stop. While Section 9 of the Charter on Rights and Freedoms is pretty clear about our right not to be arbitrarily detained, the onus has always been on individuals to know their rights and when to assert them. It has too often seemed that police services resist the duty to inform people of their rights.

That dispute led to the stand-off between then-Chief Bil Blair and board chair Alok Mukherjee in 2014 during the negotiations of the Toronto Police Service Board’s policy on carding. The Province, it seems, followed lawyer Frank Addario’s recommendations to the board by emphasizing rights and placing the onus on police officers to inform those they stop for “voluntary” interactions that they have the right to walk away. The province contends that this is a balanced approach (which I can attest to, given the other glaring gaps in the draft) that allows police officers to continue proactive policing while also ensuring that basic rights are respected.

What do the police have against informing the public about their charter rights during a so-called voluntary engagement? They certainly do not fret about reading us our rights when we are under arrest, as per Section 10 of the Charter of Rights and Freedoms. So why not proactively inform individuals that they are under no legal obligation to answer questions during a non-investigative engagement?

According to Windsor Police Chief Al Frederick, officers should have the right to “engage when they feel it’s a suspicious circumstance and not have to tell the person you have the right to walk away and you don’t have to talk to us, if you don’t want to.” Fredrick describing such constraints as “outrageous” during a press conference following the announcement of a gun and drug seizure that began with a street check. He went on to argue that carding is a public perception issue that only affects Toronto and that this regulation would inhibit officers from doing their job effectively.

In other words, he is admitting to using – and wanting to maintain the powers of – street checks as a pretext for detaining individuals for the purpose of criminal investigations. It’s all about defending the proverbial hunch, which, let’s admit, is often racial profiling by a more palatable name. (This is what happens all too often during traffic stops. You get pulled over even though you were not driving over the limit, and next thing you know the officer is looking inside your car and fishing for a reason to search it.) Moreover, Frederick’s claim suggests that cops are not acting on intelligence when they do street checks, but rather setting out to gather intelligence – fishing expeditions — by making these kinds of stops.

It’s a crucial distinction, given that most chiefs have said that carding is intelligence-led policing. Frederick’s approach suggests that carding is not intelligence-led; rather, it implies that street checks represent a form of intelligence gathering. The individual stopped and searched was not stopped because of police intel, but rather because he was acting ‘suspiciously.’

Furthermore, is it really outrageous to inform petty criminals of their charter rights? We often hear the argument from law enforcement officials that no one would talk to police if they began their interactions with “Hi, you don’t have to talk to me if you don’t want to, but do you mind if I ask you a few questions?” Of course, this claim is purely speculative and an attempt to forecast future behaviours. But when I listen to Chief Frederick, I get the sense that the proposed rules are so ludicrous that he’d rather his officers disengage altogether: “They’re telling officers drive down the street and keep your eyes closed. They might as well stay in the station and just respond once the crime occurs, because that’s really what they’re asking us to do.”

On the contrary. The regulation is not telling the police to stop talking to people. It is telling them to have a valid public safety concern when they stop someone on the streets, and then to inform them that they are not under investigative detention but rather part of a voluntary engagement that they could walk away from if they so choose. Whether we are being physically or psychologically detained, the police need to get better at communicating their thought process to the individual they’ve stopped so that that person understands what’s happening.

Instead, what we have seen for years are officers hiding behind their badge and relying on their intimidation tactics to compel people to do as they say. The regulation in effect says, enough.

Claim 2: How will we catch criminals if we have to inform them of their rights?

Police chiefs criticizing the draft regulations are spreading fear, uncertainty, and doubt. By claiming that criminals will roam freely because officers will be legally obliged to inform people of their rights is irresponsible. In Toronto, there are 2.8. million residents, 1.2 million contact cards, and less than 6000 Toronto youth involved in gangs. The math simply doesn’t add up to justify the over-representation of presumably innocent people caught in the very wide net that law enforcement casts in the name of public safety in some communities. Smart policing should be about gathering and then acting on intelligence, not going out looking for leads and tips by arbitrarily stopping people based either on a hunch or on racist assumptions.

Furthermore, gang associates and their acquaintances have rights too. Just because you’re “known to police,” it doesn’t follow that you’re marked for life and you lose your mobility and charter rights. Unless a police officer has a reason to believe that you are breaching bail, he or she shouldn’t be allowed to stop a known gang member without probable cause. Some people make bad decisions, pay the consequence, and try to turn their life around. And what’s the worst that could happen if police officers were to approach that known associate and informed them that their engagement was voluntary? Maybe they stay, or maybe the walk away. Either way, that outcome is entirely dependent on the officer’s ability to articulate and validate the reason for the stop.

Most law enforcement leaders would like to convince us that street checks help to prevent crime. And yet, they can’t provide evidence showing that carding-related data has solved or prevent crimes. It took Peel Police Chief Jennifer Evans three years to come up with six cases out of the 159,303 street checks conducted between 2009-2014.

As for Toronto, the Toronto Police Service claims in the PACER report that:

“[A]nalysis indicated from 2009 to 2011, there were 1,104,561 persons entered into the [field information reports] database…Additional analysis examined traditional intelligence led nature of contacts and determined fewer than one in ten FIR cards collected since 2009 had been assigned a nature of contact which flagged the card as being directly related to an intelligence led policing strategy.”

In a city of 2.8 million people, Toronto police collected the personal information of 1.1 million individuals through field information reports (FIR). Of that, less than ten percent of those names were tied to an active or ongoing criminal investigation. (For the rest, police cited ‘non-specific’ reasons for initiating those encounters.) While the police position these stats as evidence of the effectiveness of street checks, they make no effort to assess the flip side, which is all the social collateral damage inflicted when the police treat entire neighbourhoods or specific groups with suspicion.

So we are to believe the police when they claim that informing someone of their rights means they won’t be able to prevent crime? If we accept the chiefs’ claim that public safety would be compromised if we restricted an officer’s ability to arbitrarily stop individuals, then we must resign ourselves to the grim reality that a cop’s hunch trumps our charter rights, every time.