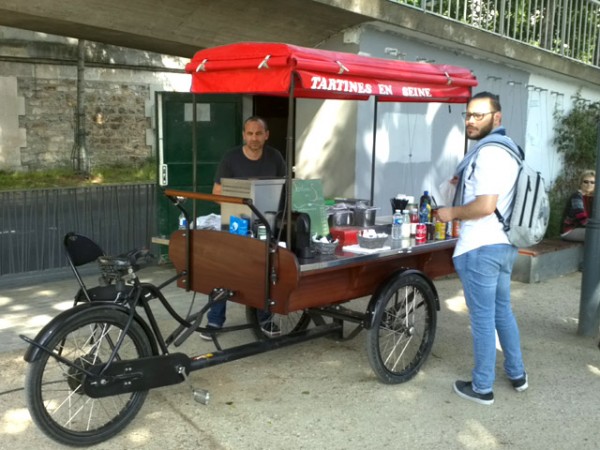 This spring, I was fortunate to be able to spend a few days in Paris. The city is in the midst of trying to reclaim the banks of the Seine river as public space (rather than abandoned industrial or vehicle traffic space). On one low-lying outcropping the city had built a simple park with chairs (awesome chairs — see photo below) — and in that park was a food bike, selling fantastic sandwiches.

My thought, of course, was, could we have food bikes in Toronto? Apart from the wow factor, the concept has several advantages. They are temporary, emissions-free, and mobile. Bikes can reach places vehicles would have a hard time with: the Paris park was only accessible by a ramp, more easily maneouvered by a bike than a vehicle. The park was a bit out of the way, but a food bike has lower overhead than a truck or a full food stand, so doesn’t have to sell as much to make money. And a food bike is temporary, so it doesn’t even have to open at times when no-one will be around, or can go to different locations depending on demand. It doesn’t need to run a motor, so its emissions are far lower than a food truck, and lower too than a food stand that has to be brought in and out by motor vehicle.

One part of Toronto where food bikes could have a real advantage could be the ravines. Toronto is currently trying to develop a whole ravine strategy, in part to better connect them to the city and encourage more people to use them. But we would not want commercial motor vehicles in the ravines, nor would we want to build permanent structures in many places. Food bikes, on the other hand, could access the trails and station themselves at key locations on days when lots of people are using the ravines, providing animation and refreshments to visitors without imposing either pollution or a permanent presence. Some of the same advantages could apply to using food bikes as a way to provide refreshments in other large parks that don’t have retail nearby, too.

Food bikes have been tried in Toronto before but don’t seem to have taken off, possibly because of red tape. It’s not clear if  current street food regulations even provide for them, and using them in ravines would require rules about location and disposal of waste. Readers may know of other experiences or obstacles, and if so, please share them. But it seems like it should be possible to enable them, and they could be a good addition to the public life of the city. 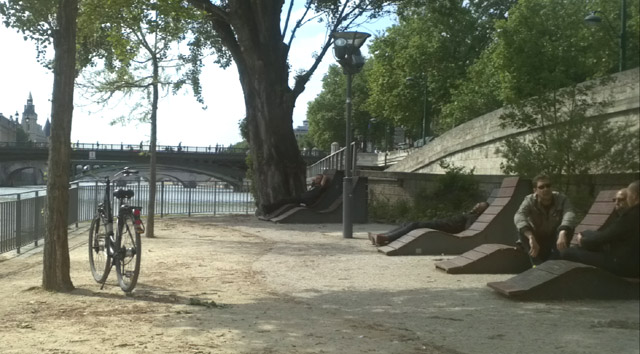 Note: the Paris food truck pictured above benefitted from access to an old storage room that had been built into the embankment. A fully self-sufficient food bike might not be quite as streamlined.