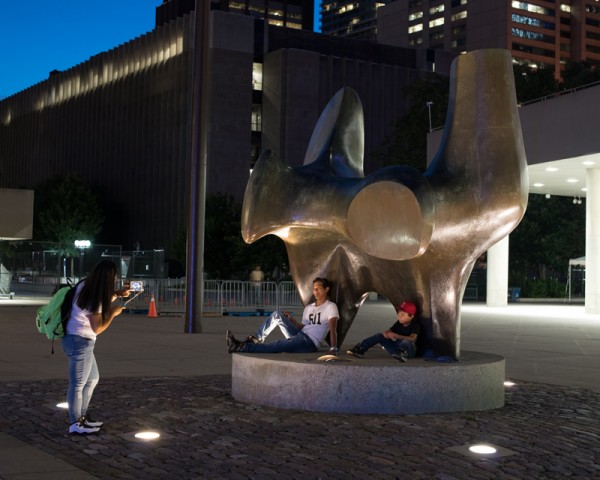 The Artful City is a bi-weekly blog series exploring the evolution of public art and its role in the transformation of Toronto, both the city fabric and the community it houses.

On October 27th, 1966 amidst a crowd of 10,000 Mayor Philip Givens took to the loud speaker at City Hall and proclaimed that, “Posterity will remember tonight… “The Philistines have retreated in disorder.” [1]  This mass gathering and monumental address was organized to mark the unveiling of Henry Moore’s sculpture entitled, Three Way Piece No. 2: The Archer, originally selected for the plaza by Finnish architect Viljo Revell who was responsible for the design of the municipal complex. 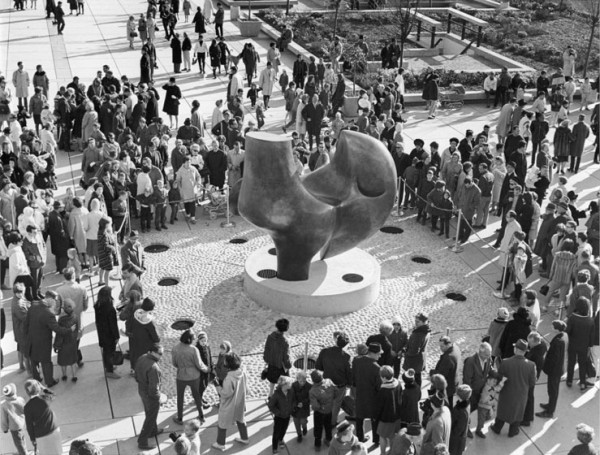 By today’s standards this modestly sized, two and a half ton bronze sculpture would be considered aesthetically pleasing, perhaps even powerful, but largely benign.  It was not the largest and certainly not the most provocative of Moore’s creations but, nonetheless, The Archer remains one of the most controversial public sculptures of its time and certainly the most polarizing piece in Toronto’s history. The Archer’s abstract form, international author and $120,000 price tag placed the work at the centre of a heated debate about the value of art in the public realm, its accessibility to the broader community and its role in shaping the city’s image.

Politicians within City Hall fell on either side of the debate, but without question The Archer’s most adamant supporter was the Mayor himself.  Givens understood that the battle over the bronze represented something much larger than the installation of a single sculpture.  Moore’s arrival in Toronto, in a similar fashion to his presence in other major metropolises, signified the city’s coming of age and entry onto the world stage.  Therefore, at the heart of the debate was a pressing question about Toronto’s willingness to look forward, to embrace the culture and thinking that defined the time.  In the months preceding the sculpture’s arrival, Givens challenged the politicians and the public alike, posing the following questions, “Do we have the curiosity and courage to face our own time?” Can we learn to live with something new, something that is not a copy from the past?”[2]

Despite Givens’ best efforts, council ultimately refused to support the commission with municipal tax dollars, and the Mayor was forced to launch a public campaign to secure the necessary funding.  Though the drive was successful, and The Archer eventually found its central place on the plaza, Givens’ run for a second term was not met with favour.  Many speculate that the Mayor’s support for the sculpture ultimately cost him his job.

Much has changed in the 50 years since The Archer’s erection. Representatives from both the public and private sphere have made significant investments in public art throughout the city, recognizing its vital role in the sustained health and imagination of Toronto. Working across various media including, sculpture, sound, photography, video and light, artists are actively contributing to the changing image of Toronto, inciting us to see our city and its global context anew.  Public art is now a widely accepted cultural, social and economic tool, considered central to the art of city building and place-making.

Yet, despite these advancements and the proliferation of public art across the city, one must ask if the discourse around public art in Toronto has evolved since 1966? More often than not, we retreat to the same set of questions that plagued the Moore commission; who is public art for? what does it say about our city and our community? what is its value both now and in the future? 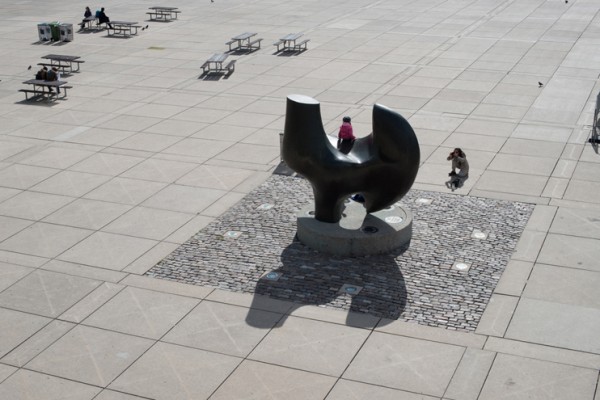 Over the next several months this bi-weekly blog series will address these questions while posing new ones.  What role does public art play within Toronto’s privately and publically owned spaces? Can current policies be supplemented to support more diversified programming? Can artists rather than sites be recast as public art protagonists? How can public art best be used as a tool for social engagement and economic development while contributing to a discursive public realm? What forms/modes of public art best define our time?

Through a series of texts, interviews and imagery The Artful City will expose a diverse collection of perspectives, collectively representing the array of professional interests influencing Toronto’s public art production. The blog will celebrate recent work and draw attention to best practices in other international cities. It is intended to advance critical discourse about public art and stimulate dialogue and debate between artists, architects, developers, public art consultants, city officials, educators and the public about how art can best contribute to Toronto’s vital and evolving public realm.  We invite you to join us as we explore This Artful City.