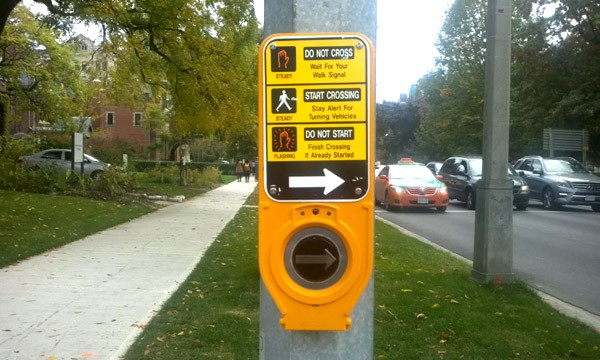 Pedestrians are often accused of putting themselves in danger by crossing wide, fast streets at locations where there is no traffic signal. But in many parts of Toronto, traffic signals are 1 km or more away from each other. A pedestrian who wants to cross the street midway between them would have to detour a full kilometer, a walk of approximately 10-15 minutes, in order to use traffic lights. One could call this a “safe crossing desert.” Yet the city’s traffic signal decision process does not take such distance into account.

Yesterday, Toronto’s Public Works and Infrastructure Committee was deadlocked on just such an example — a proposal, submitted by a local councillor on behalf of local residents, to put a traffic signal at the intersection of Victoria Park Avenue and Conroy Avenue /Donora Drive. The nearest traffic signals are 535 metres to the south and 565 metres to the north. As Walk Toronto’s Michael Black pointed out in his submission to PWIC on this item (PDF), in downtown terms, that’s as if there were no signals across Yonge Street between Richmond and College (disclosure: I am a colleague of Michael Black’s at Walk Toronto).

Transportation Services staff opposed this proposal. When the City gets a request like this, staff will assess whether it meets a “warrant” — that is, specific conditions required to support it. For traffic signals for pedestrian safety, they require 200 pedestrian crossings during the busiest times of the day.

Traffic services only counted 105 crossings. They further noted that, although the posted speed is 50 km/hr, the actual average speed of traffic was 67 km/hr.

That leaves roughly 105 people daily who have to brave extremely fast traffic to cross the street, with no practical alternative within a reasonable distance.  Transportation services noted that there haven’t been any pedestrians hit at that location in the past five years — but as Michael Black points out in his submission, we should not be required to sacrifice a pedestrian every time we want to improve pedestrian safety.

If no-one lives in an area, then it might be reasonable to leave such a long stretch of road without a safe crossing. However, this is in fact a residential area, with some foot traffic and transit stops that need to be accessed from both sides, including one right at Conroy on the east side of Victoria Park. At the moment, the transit stops on the other side of the street are spread out, so pedestrian crossings may not happen at the exact spot where the traffic signal is proposed. However, if there was a traffic signal in place, some additional people would likely divert to cross there. As well, the staff report notes there is the potential that those transit stops will be consolidated at this location in the future.

Finally, a point staff make in supporting a different traffic signal further north on Victoria Park, at the Gatineau Hydro Corridor (PDF) applies equally to the Conroy/Donora location, and to every other proposal to install a traffic signal for pedestrians safety: namely, these would be “actuated” signals that only change when a pedestrian or vehicle is waiting to cross. If no pedestrians or vehicles are waiting, the signal won’t change and traffic won’t be interrupted. As staff say, “The traffic control signals will only be activated in the east/west direction when a … user … is present. In this case, any additional delay from the new traffic control signal is expected to be limited.” The signal would only be used when it is actually needed, and if fewer pedestrians cross, the signal won’t change as often.

A good start to solving this problem would be straightforward — add a signal distance factor into the warrant for traffic signals. The warrant could state, for example, that if the nearest signals are half a kilometre or more distant, then a signal is warranted even if only 100 pedestrians are observed to cross in a day.

It could also reduce the requirements at locations where there is a transit stop without any nearby signalized crossing, since anyone using a transit stop will likely need to cross the street at either the beginning or end of their trip. If Toronto want to encourage transit use, it needs to make it safe to access transit stops.

All over the city, there are inhabited locations with nearby destinations where pedestrians would have to detour a kilometre or more to find a safe crossing point. With Toronto looking into a road safety strategy inspired by the Vision Zero concept of reducing traffic deaths and injuries, it’s time to create more safe crossing points in these “safe crossing deserts.”