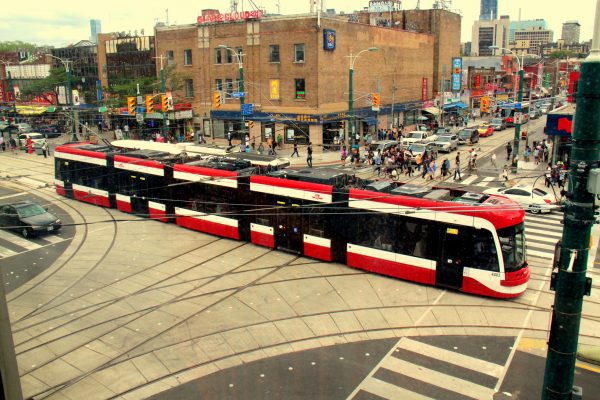 According to the latest pronouncements from company executives, the epic shemozzle that is the TTC’s Bombardier streetcar contract — for 204 low-floor vehicles, at a cost of $993 million — will, henceforth, be dealt with in a hard-headed, business-like manner as befits a blue chip multi-national. Heads have rolled, blame has been apportioned, and attention is now focused, laser-like, on a real, honest-to-god, cross-my-heart-and-hope-to-die deadline: 2019.

Bombardier’s explanation for the fiasco is that components for the so-called Flexity vehicle, made on a sub-assembly line in a giant factory in Sahagun, Mexico, were inadequate, and thus held up the manufacturing process in Thunder Bay. But, as TTC CEO Andy Byford has noted, the company is also talking about “adding capacity” as a means of catching up on all those back orders.

If you think about it, those two explanations don’t exactly align. Indeed, I feel that plenty of skepticism about Excuse A — subpar components — is warranted as we try to figure out what the hell went wrong. After all, this wasn’t ever a case of measuring twice/cutting once.

Bombardier is a highly integrated manufacturer and it operates — as do all multi-nationals — with a network of global supply chains that connect its far-flung operations to one another and hundreds of sub-contractors. According to Bombardier itself, the Sahagun complex has produced major sub-components for vehicles purchased by transit agencies in New York, Kaula Lampur and Vancouver, which purchased Bombardier’s monorail cars for the Skytrain network expansion (those “Innovia” vehicles were also deployed in 2014 in Sao Paulo in time for the FIFA World Cup).

Yet as far as I’ve been able to determine, quality problems have not surfaced with these other customers. Indeed, Bombardier’s Mexican executives in 2013, reported Bloomberg, touted the Sahagun plant as a platform to sell more train systems and engineering services throughout Latin America, but especially Mexico – hardly evidence of chronic quality-control issues.

The problem, I suspect, has far more to do with the order pipeline, and which customer gets the attention and space on the production line.

Consider these examples from elsewhere in Bombardier’s universe. In 2006, Berlin’s transit agency, BVG, placed an initial order for the company’s Flexity trams, and then subsequently increased its purchase, in 2009, 2012 and 2015, bring the total to 189 vehicles. The deal is similar, in quantum and time frame, to the TTC’s.

Except for execution: “As of today, the Berliner Verkehrsbetriebe (BVG) has 115 Flexity model trams in operation,” spokesperson Jannes Schwentuchowski said yesterday. “Until now, delivery of the trams has been punctual. The remaining 74 vehicles are to be delivered until mid-2019.” (BVG celebrated the 100th vehicle delivery last June. While the TTC has waited for two years for 17 vehicles, Bombardier managed to make 15 for BVG in just the past nine months alone.)

In Brussels, meanwhile, the local transit authority last year took delivery of the last of 220 Flexity trams. While the initial order goes back to 2003, the purchase was extended three times, in 2005, 2008 and 2010. The final 87 vehicles, ordered in 2010, were in service just five years later.

(A few more confounding details: while Bombardier’s not had any difficulty delivering on the TTC’s large subway replacement contract, some muckraking by the New York Daily News has revealed that the company is chronically late shipping replacement cars destined for the Second Avenue subway and made in the company’s Plattsburgh, New York, factory.)

So if European customers aren’t having problems with their Flexity orders, why are we having so much difficulty with ours?

It’s worth noting that Bombardier, like many large manufacturing firms, has dozens of plants worldwide. Many are located close to key customers — Bombardier owns factories in both Germany and Belgium — as means of both reducing shipping costs, but also to use local employment as a point of leverage with and over decision-makers.

It’s surely not a coincidence that the main customer at Sahagun is Mexico City’s STC, the regional transportation agency, which, according to Bombardier itself, put in an LRV order in 2012 that went into production in 2013.

Bombardier’s Mexican operations, in fact, have very deep roots: during a wave of privatization, the company bought Concarril, a state-owned rolling stock manufacturer, in 1992. STC, according to its wikipedia entry, is a giant transit company with three times the TTC’s ridership.

What’s more, Bombardier has supplied more than 70% of all passenger rail vehicles in Mexico, as well as large segments of the orders from major metropolitan customers in Mexico City, Guadalajara, and Monterrey.

Given all that history, and in particular the heft of a very dominant set of public sector patrons in a country that is hardly a paragon for good governance, it isn’t hard to imagine that an inter-company order of components for a distance customer may play a distant second fiddle when it comes to allocating time on the production line of a 2000-employee factory.

What’s the take away? The TTC has yelled and threatened, and will be suing Bombardier. And who knows what will happen when the next set of major TTC or Metrolinx RFPs go out the door.

But what seems increasingly clear to me is that in a sector where suppliers jostle to be able to claim home ice advantage by pointing to a local plant (and local jobs, and local taxes paid), the logistical or cost benefit to that local customer can be easily squandered when important pieces of those big projects are outsourced to distant factories with their own sets of customers and local priorities. I’m also doubtful that Bombardier Transportation’s new president will have the clout to make significant changes in the way the Sahugan plant prioritizes its customers’ various production schedules. Those sound bites may have somewhat mollified the TTC, but the problem, in the end, seems to be a structural one.

All over the world, in both developed and developing nations, procurement can be a messy and politically fraught affair, so that reality is not unique to Ontario.

In the case of this sordid mess, the TTC and Metrolinx gave Bombardier those huge streetcar/LRV contracts at least in part because the company employed so many blue-collar workers in Thunder Bay, and so it was in Ontario’s interest (as provincial officials believed) to keep the business in the family, so to speak.

They all thought there was a quid pro quo, when, in fact, there was only a quid.