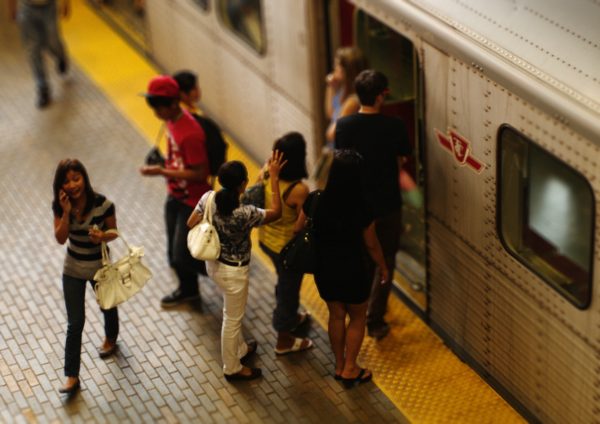 If I have to be brutally candid about my gut reaction to last week’s transit decision, I’ll confess that part of me felt the people of Scarborough are indeed getting the system they deserve: a symbolic and grotesquely over-priced terminus that will serve a tiny minority while delivering little else in terms of city building, intensification, social equity, emission reduction, or economic growth.

Of course, the people of Scarborough deserve more, and better, although they’ll likely get even less. I predict we’ll never see the money for all those LRT lines, all the political pledg-ifying notwithstanding. As with the doomed Sheppard East LRT, the shape-shifting justifications for delay will accumulate and eventually take on their own corrosive momentum — shortening the line here, deleting stops there, etc. — until the inevitable cost over-runs on the Scarborough subway project squash any remaining rapid transit ambitions for east Toronto.

Another generation will pass as we, alone among aspirational global cities, inch steadily backwards even as our leaders cheer and tell us that what they’ve achieved is “progress.”

The other uncomfortable reaction I have to the outcome of this debate is that the funding from the other orders of government, but particularly Queen’s Park, must now be viewed not as a progressive approach to infrastructure investment, but rather as a tragic and deeply distorting liability.

At times like these, I find myself asking, what if we actually had to build transit on our own? What if Toronto councillors actually had to account for their choices to the people who vote for them?

Because even allowing for the prevarications and aggressive ignorance of our local elected representatives, the hyper-politicized back-channel influence of the provincial government has radically derailed the way Toronto plans transit since the mid-1980s. Up until then Queen’s Park covered half of the TTC’s operating shortfalls and 80% of its capital costs. It was during this period when the Bill Davis-era cost-sharing formula began to unravel.

Proof? Consider that Metro Council’s 1985 transit expansion plan, dubbed Network 2011, anticipates a vision very similar to what was approved last week, but which will only be realized by 2030 – almost half a century later, and then only partially! Surely if that’s not prima facie evidence of a deep structural failure in the governance of a critical task of local government, I can’t think of what is.

Let me say that I get the math, and that it is difficult to imagine how the City could finance large-scale rapid transit projects like The Eglinton Crosstown without help. Indeed, since Mike Harris scrapped the Davis formula and declared transit to be a purely local responsibility, it has become an unquestioned article of faith that Toronto needs (deserves!) the support of the provincial and federal governments in order to expand the system to meet the needs of a fast-paced, growing metropolis.

But after decades of worsening planning failures, I’d argue that this particular sacred cow is in desperate need of a reconsideration. We need to understand, systemically, why provincial and federal money frequently leads to indefensible decisions with exorbitant prices and little pay-off.

From where I sit, the crux of the issue has to do with what Bay Street brokers used to call “OPM.” “Other people’s money,” or, more generally, the problem of moral hazard.

The most striking detail about last week’s transit debate is that our municipal officials got to spend so much time bloviating in public about the allocation of scarce tax resources provided by other orders of government and levied by other elected officials. It’s a bit like traveling on the company’s dime: you’re never quite as cost-conscious as you would be if you’re paying your own way.

In fact, if I have to distill the failure of that debate to its most essential element, it is that the men and women grappling with these momentous decisions have the luxury of making almost purely political choices instead of forcing themselves to engage with the evidence of what will work and what won’t, or, to put it another way, what degree of expenditure provides the greatest return for the residents and businesses of those communities.

The truth of the matter is that members of council, led by Mayor John Tory, had very little skin in this game. They didn’t need to think intently, and as a single government, about whether they were making the best use of the taxes they collect from, and on behalf of, their constituents.

Tellingly, Tory’s executive committee discretely punted the much-touted revenue tools debate until the fall – perish the thought that council might actually be compelled to debate transit plans and the funding required to implement them in the same session.

But it wouldn’t surprise me a bit if the staff proposals for new taxes or levies, which are to be presented to council in October, get kicked down the road yet again: More consultation! More policy analysis! More discussions with provincial officials!

Why? Not complicated. Toronto politicians can predict, with reasonable certainty, that Queen’s Park will be back again, offering fiscal enticements in return for the sort of feudal fealty that re-elects MPPs but does little to build the city.

Moreover, if you consult your watch or Google calendar, you’ll note that it’s entirely plausible that council might not get around to focusing on how to pay for the balance of the Scarborough plan, or any other transit plan, until mid-2017, and you can bet your one-stop subway that there’s zero chance Tory will want to come anywhere close to a tax hike debate with a re-election looming.

Won’t happen. I don’t care what he said last month about his willingness to implement revenue tools. After all, Tory is the guy who said he’d listen to the experts, and we all know how that’s coming along.

The solution to this pathetic situation, as I’ve said before in this space, is a massive re-engineering of the governance of the region, or at least a set of reforms that serves to surface the maneuvering that’s done behind closed doors. But the provincial Liberals have no appetite for such changes because the opacity of the existing system has served their interests so well for so long.

If I have to be brutally honest at moments like these, I find myself eagerly anticipating the day — coming soon — when the Tories oust the Liberals and unilaterally edit Toronto council out of the transit planning game once and for all. At least then, we’d know who to blame.