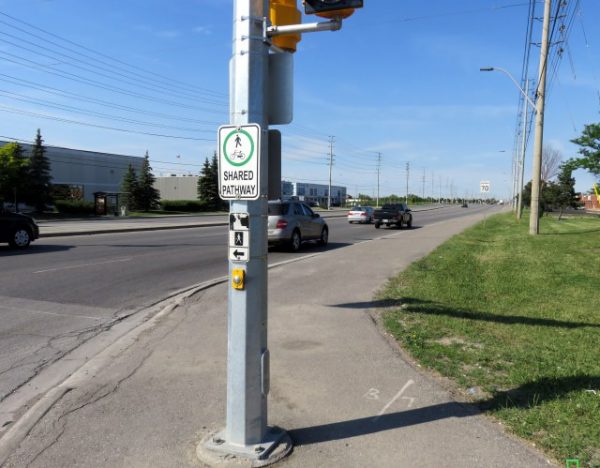 Article adopted from a post in Marshall’s Musings, the author’s personal blog

In central Toronto, bike lanes and cycle tracks are the predominant form of cycling infrastructure. While there are some bike lanes in suburban Toronto and in other municipalities like Mississauga and Brampton, most bike routes, if they exist, are off-road multi-use trails, in ravine or hydro corridors, or alongside major roads, like sidewalks.

Multi-use paths are pleasant to ride on, but they’re often treated as recreational trails, rather than transportation corridors. Most paths are not cleared of snow in the winter, and they are often isolated from the adjacent road network and local destinations, and they can meander, rather than follow straight lines. Road crossings can often be awkward.

Bike lanes, which offer less protection from motorized traffic at least are integrated with the rest of the street grid, and are generally more direct. But on fast-moving suburban arterial roads, they aren’t ideal without separation. This is where the side-of-road path comes in.

In Mississauga and Brampton, there are many new side-of-road shared pathways, which follow major traffic arterials such as Derry Road and Bovaird Drive. These shared paths are similar to sidewalks, but are paved with asphalt instead of laid concrete, are wider, easy and inexpensive to install, and don’t take  space away from automobiles and trucks. But they have their drawbacks. 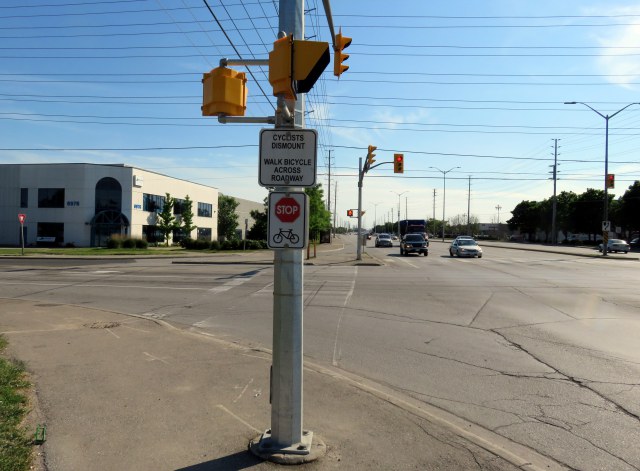 At every intersection (and even some at private driveway crossings), there are signs instructing cyclists to stop, dismount, and walk their bikes across. Suburban intersections are built to move cars and trucks quickly, often featuring wide turning radii and channelized right turns. There are no dedicated traffic signals for cyclists; they are expected to cross like pedestrians, on foot, often across nine lanes of traffic at a time. The alternative is riding with traffic, or not riding at all. 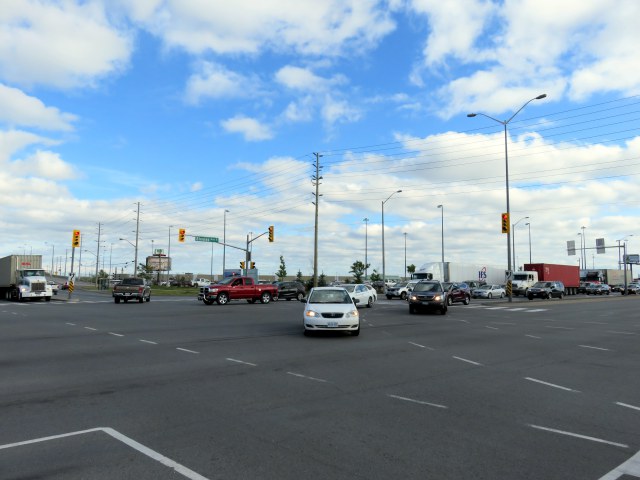 Steeles Avenue and Bramalea Road, Brampton. On the other side of this intersection is a major GO Transit rail and bus hub.

The City of Brampton has a great pathway master plan, developed in 2002, but the recommended network has yet to be realized. Many off-road trails, through ravines and utility corridors do not feature curb cuts — cyclists must jump the curb, ride on the sidewalk, or dismount and remount at each curb. In Brampton, off-road paths are designated as “recreational trails,” which is indicative of persistent attitudes of cycling being a recreational activity, rather than a legitimate mode of transportation.

At least Toronto can show the way. On Eglinton between Scarlett Road and The West Mall in Etobicoke, the City of Toronto maintains a cycling path along the wide boulevard on the south side of Eglinton. At some intersections there are separate crosswalks and cross-rides that reduce the likelihood of conflicts between cyclists and pedestrians. Intersections are clearly marked, and newer installations include bicycle signals. 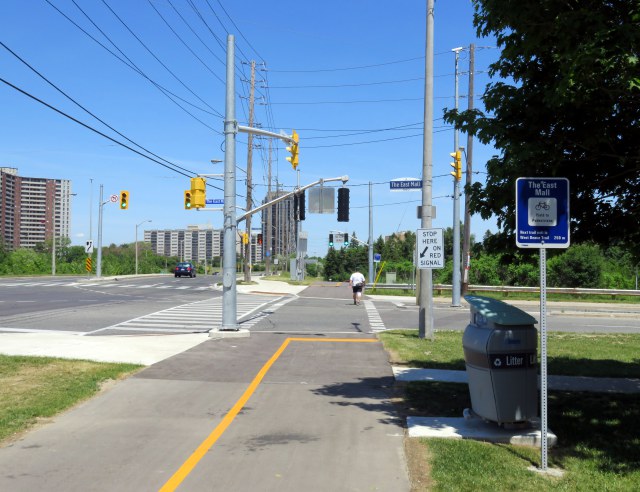 Sidepaths are a very useful and simple way to improve cycling infrastructure in suburban locales, where wide right-of-ways provide space for cyclists and pedestrians to share wide paved pathways on the side of busy roads. But intersections need to be improved, forcing drivers to slow down when making right turns and watching for vulnerable road users. But it can be done. After all, there are plenty of cyclists already in Toronto’s suburbs, and they have as much of a right to safe routes as downtowners.