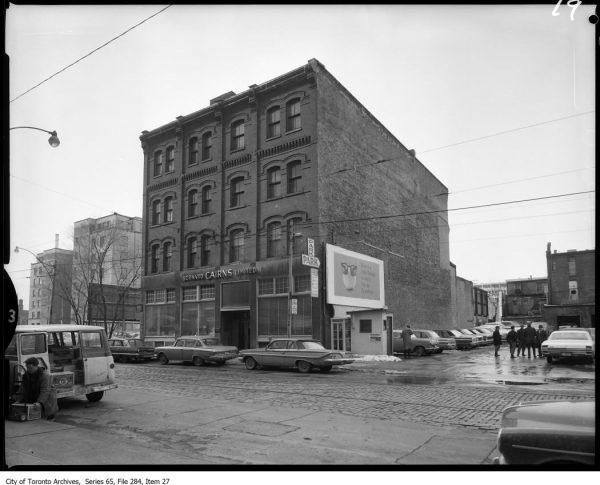 File consists of images of the stores, restaurants and theatres on the south side of Queen Street West. The back of these buildings from the alleyway is also shown.

What we choose to build, what we choose to demolish and what we choose to save tells us a lot about dominant human values: social, cultural, environmental, economic and political. Buildings and landscapes embody these values and reveal information about the people who designed them, the people who inhabit them and the geographic, cultural or historic moments or movements that inspired them. Our built environment and landscapes tell stories, and they reveal and illustrate our many histories, both the illustrious and the otherwise invisible.

Toronto’s diverse cultural heritage is reflected in the built form and landscapes of its neighbourhoods, main streets, commercial areas, ravines and parks, as well as in the traditions and cultural spaces of its over 2.5 million residents. Cultural heritage is widely understood to be an important component of sustainable development and place-making and, as Toronto’s growth intensifies, Toronto City Planning is acting to ensure that intensification is reconciled with the ongoing conservation of significant heritage areas. To this end, the City is using a suite of policy tools and processes to create a culture of conservation and context sensitive design, recognizing that, as Canada’s largest city, Toronto faces both unique challenges and opportunities in conserving and benefiting from heritage conservation districts (HCDs).

In his September 15, 2016, opinion piece on HCDs, Michael McClelland asserts the City of Toronto is looking for a “silver bullet” to control development in the downtown core; neither are HCDs a “blunt tool.” On the contrary, the identification, evaluation and designation of HCDs across the entire City have been made a planning priority because HCDs are valued for their ability to provide contextual, place-based policies and guidelines. HCDs are also valued for their ability to strengthen business areas; leverage economic development; positively influence conservation and planning outcomes; enhance civic engagement; protect the public interest, and demonstrate compliance with provincial planning policy and the City’s own Official Plan.

HCD studies and plans are undertaken by the City with the assistance of multidisciplinary consultant planning teams that are made up of historians, urban planners, urban designers, heritage conservationists, archaeological resource managers, landscape architects and other specialists as may be appropriate. Within City Planning, a cross-divisional planning team, led by a Heritage Planner, ensures that HCDs, Secondary Plans, Official Plan amendments, and other significant area studies such as TOCore have complementary regulatory frameworks that reflect the common goals of all city departments as mandated by City Council. These planning professionals undertake extensive community and stakeholder consultations such that HCD studies and plans can take years to craft and implement. For example, the King-Spadina HCD plan currently under development has been nearly four years in the making. HCD plans take as long, if not longer, than any other piece of planning policy.

By establishing HCDs in significant heritage areas within the downtown, the City has taken a leadership role in the heritage and planning communities, both in Toronto and at a national level. Many major cities throughout the world have historic districts in their urban cores (some have dozens), and all have their own associated guidelines and regulations. This is not a new concept for downtown Toronto (the first HCD in Toronto was Fort York and Garrison Common, designated in 1985 and the Union Station HCD, which encompasses much of the downtown financial district was designated in 2006) and it is most certainly not a new concept internationally. In addition, and contrary to Mr. McClelland’s assertions about City programs, the city funds a multi-million dollar tax-rebate incentive program to assist HCD property owners with maintenance and conservation work. The provincial government matches the city’s contribution dollar for dollar, leveraging close to four million dollars in direct investment in heritage properties in 2015 alone. Many owners do not want to sell their downtown properties for redevelopment but the tax burden is often too great. Our program seeks to offset this inherent disincentive to capital investment.

As Toronto evolves and grows, heritage conservation districts are an appropriate planning tool that can assist the City with sensitively managing growth and change in areas that have come to define our shared city, areas such as historic Yonge Street, the St. Lawrence Neighborhood (Old Town), the Garden District, King-Spadina, the Distillery District, Kensington Market and West Queen West. Existing heritage conservation districts already promote and sustain walkability, spaces for small businesses, a healthy tree canopy and diversity in built form and HCD plans provide policies and guidelines to ensure that new development responds to valued features and that valued features are well treated. This does not mean making new buildings into historic pastiche or mimicry; it means bringing the best architectural designs of our time into a more harmonious conversation with their older, sometimes wiser neighbours.

Economic development comes in many shapes and sizes, and HCDs help to support and stimulate creative energy for many development types and uses while providing a stable and more predictable planning process. Heritage conservation districts enable the City to manage change within places that represent Toronto’s rich social, cultural and architectural history—places that contribute to the livability and appeal of Toronto as a multicultural, sustainable and equitable city for current and future generations. The World Banks calls this the “Economics of Uniqueness.” The City of Toronto calls it good planning.