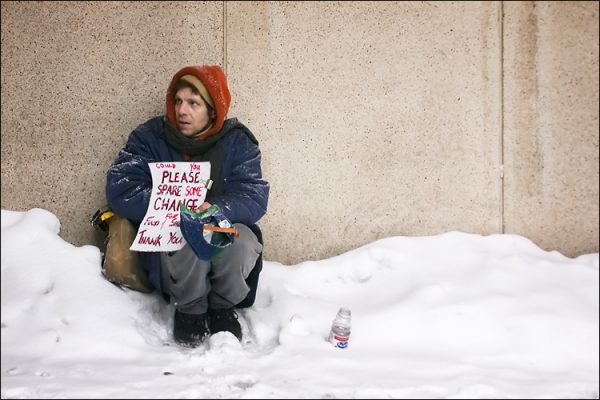 I haven’t observed a political crisis this ripe with potential since that weird interlude during the 2008 credit meltdown when the leaders of the federal Liberals, NDP and Bloc Quebecois suddenly realized they could kill Stephen Harper’s austerity minded minority government on a non-confidence motion.

In that episode, Harper hastily pulled the constitutional circuit breakers, hid the fuses and emerged some months later as an enthusiastic Keynesian.

But Mayor John Tory, who has made an epic mess of the emergency shelter housing crisis during this extended deep freeze, may have no such recourse. In the very first minutes of an election year, he’s basically blown a gaping hole in his carefully cultivated image as a socially compassionate centrist, all but daring Torontonians who grudgingly supported him in 2014 to park a dissenting vote with whomever has the sang froid to seize this moment.

Let me say, before I continue, that the shelter crisis is not, and should have never been, about politics.

The City’s own statistics show an alarming 27 to 30% increase in the average average nightly occupancy levels since 2015, with other exacerbating factors, such as the loss of dozens of shelter beds due to an infectious disease outbreak, evictions, rooming house conversions, gentrification, the opioid crisis and a general lack of resources to expand emergency overnight programs such as Out of the Cold sufficiently to meet demand.

As is well known, the City responded by establishing a new 400-bed shelter at the Better Living Centre, on the CNE grounds. [Correction: The Better Living Centre facility was originally fitted out with 100 new spaces with cots, with the additional 300 spaces provided through new respite centres and motel rooms.] But council voted down a motion earlier this fall by Kristyn Wong-Tam to request the federal government to allow the use of the two armories, including the one in Moss Park, as emergency shelters, should the need arise. Tory helped round up the votes to kill that motion, which merely asked Ottawa to do something it has done on three previous occasions.

It’s almost always true that prevention-minded decision-making leads to better outcomes. But the mayor didn’t grasp Wong-Tam’s logic then; in the past several days he has been too dug-in, or pig-headed, to walk it back.

It’s not at all clear why, unless you consider, as some do, that Tory has a very long record of making poorly considered decisions based more on political opportunism than principled leadership.

What has possessed him in recent days, however, is simply beyond me. As most people enjoyed their holidays secure in the warmth of their homes, Tory fell back on statistics about the occupancy levels and showed no comprehension of the specific crisis confronting a precariously exposed individual on the coldest night in almost 60 years who is told there might be a bed available, but it’s on the CNE grounds, half way across the city and nowhere near transit.

It’s little wonder that in a matter of a few days, street nurse Cathy Crowe was able to gather over 36,000 signatures on a Change.org petition, urging Tory to ask the feds to open the armories. Church leaders made common cause, pleading with Tory to do the compassionate thing. And on New Year’s, two business people came out of the woodwork with their own cash and time to find hotel rooms for several dozen homeless people left in the lurch because of crossed bureaucratic wires.

I simply can’t fathom what’s to be gained from sticking with a plan that has clearly failed under the extreme pressure of a run of polar temperatures.

But I can certainly see what Tory has to lose.

Scarcely a week ago, he was giving end of year interviews promising, if elected, to do more to involve the (presumably obedient) downtown centre-left politicians in the power structures on a new council. He’s made other overtures to the city’s downtown neighbourhoods, including seemingly enthusiastic support for the proposed rail deck park.

But when the temperatures plummeted, Tory could neither reason his way out of the storm nor empathize with those trapped in it. Consequently, he has revealed himself, more completely than at any previous moment in his mayoralty, to be the figure of insulated privilege that many progressives knew him to be, but nonetheless supported as a more palatable alternative to Doug Ford.

With yet another frigid weekend in the forecast, can Tory clean up this mess?

With Toronto’s ombudsman launching an enquiry into the Dec. 30 mix-up in the shelter system and a new shelter policy set for a council debate later this spring, I’m guessing he will attempt to unscramble the egg, perhaps beginning as early as this morning, at a scheduled 10 a.m. press conference at City Hall.

But I’d argue the damage to his reputation is now irreparable. Tory has produced in a matter of days a giant political vulnerability for himself among centre-left voters who — as of now — have no standard bearer or even a high profile protest candidate to rally around, but much to be angry about.

Until Christmas, the most visible potential centre-left challengers were all set to sit this one out — to give Tory his second term instead of testing the calculus of an unpredictable three-person race that could split in the favour of another Ford.

But from where I sit, I’d say the ground just shifted, and that those disillusioned votes on the centre-left are not only there for the taking but perhaps less afraid of the strategic voting bogeyman.

After all, Torontonians may be cheapskates and fixated on real estate. But when so many people from so many backgrounds basically agree that Tory blew off his duty to care for the city’s most vulnerable citizens, you’ve got to think that this election year may not play out as predictably as our chief magistrate had planned.

For John Tory, a long season of icy cold weather may just be starting.

UPDATE: At a press conference this morning, Mayor John Tory, flanked by councillors Joe Mihevc, Ana Bailao and James Pasternak, announced that he will be asking Ottawa to allow the City to use the Moss Park Armoury as the seventh respite centre. He also said City shelter staff were expanding the spaces available in the Better Living Centre from 110 to 140. MP Adam Vaughan, who attended the press conference, noted that the federal government is still waiting for a formal request from the City. But, he said, “We’re ready.”

Tory side-stepped numerous questions about why it took so long for his office to walk back a stance that was widely condemned, insisting that the use of the armouries was always an option, but down the list due to the fact that it wasn’t a city-owned building that could be open around the clock. “It was never off the table.” The mayor said this winter’s crisis has been driven by various factors, including the weather, a growing number of homeless refugees, lack of emergency shelters elsewhere in the GTA and the prevalence of untreated mental illness.

The move to request access to the Moss Park armoury in the past twenty-four hours underscores one of the criticisms directed at the decision to locate a respite emergency shelter in the Better Living Centre, which is that it was nowhere close to the areas of highest need.

Councillors Mihevc and Bailao also spoke, calling for more transitional housing for people with addiction and mental health problems, including shelters set up with on-site services to help individuals find housing. “This is a new development for 2017,” said Mihevc. Both blamed the mounting shortage of affordable housing in the city as a direct contributing factor to the shelter crisis.

But Pasternak sought to cast the swell of demand for emergency shelter spaces as an emerging issue. “Homelessness is quickly becoming the social challenge of our time.” In fact, homelessness, to a greater or lesser extent, has been on the City of Toronto’s policy agenda from virtually the moment the Mike Harris Tory government imposed municipal amalgamation, slashed welfare rates and downloaded social housing in the mid-1990s. It has been a social challenge, albeit an unmet one, for over two decades.