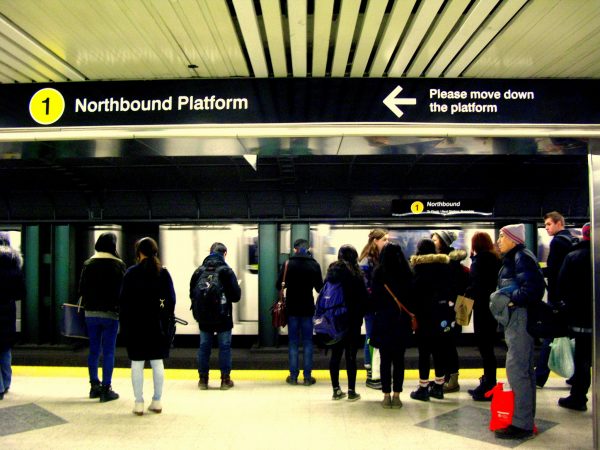 There is, in this city, a person going about their business today who will die after being accidentally shoved in front of a moving subway at Yonge and Bloor due to critical over-crowding on the platforms during rush hour.

Will it be you?

Or, worse, will it be someone you love?

Maybe this soon-to-be dead Torontonian is that good-natured marketing associate who always brings a flat of donuts to the weekly staff meeting. Or perhaps the bright Ryerson engineering student whose parents moved heaven and earth to get to Canada, and upon whose shoulders they have heaped all their dreams.

It’s possible the victim won’t fit so neatly into our pantheon of urban martyrs. He’s the guy down in tech support who never removes his earbuds and makes no effort to know his co-workers. Or that blowhard who (as the day two human interest profiles will gently note), rails ceaselessly about leftist politicians and isn’t shy about his enthusiasm for the Scarborough subway, cost be damned.

Maybe the person lives downtown, but…maybe not. That detail, laden as it is with the full freight of politics, will ricochet through the city like a stray bullet.

Whatever the individual’s back-story, the victim will leave behind the usual collection of parents, nieces and nephews, children, friends, partners and co-workers, all of them sucked into those especially miserable vortexes that swirl around preventable deaths.

One will tearfully tell reporters she texted the person moments before the accident. Another will say he only learned about the horrific scene when it flashed on the lunchroom TV permanently tuned to CP24 and then recalled wondering idly, three hours earlier, why his co-worker wasn’t at their desk.

Everyone not touched directly will feel gross.

This is what we’ll do, as sure as night follows day.

What will our decision-makers do? Will they feel a jabbing pang of hot shame when they learn about what happened? Will they find themselves hurtling back to key moments when they themselves could have altered the path of this fast-moving train, or will they retreat into a heavily fortified cage of self-justification?

Will they blame systems, other governments, voters?

Here are some more questions that come to mind: Will our leaders – and I’m not just talking about those of the municipal variety — attend funerals or place condolence calls to grieving parents? And if they do (though not all will), what could they possibly say to make things right?

I’m old enough to remember when eleven concert-goers were crushed to death in a surging crowd during a Who concert in 1979 in Cincinnati. Tremors and energy can pass through crowds with uncontrollable intensity. We all know that uncomfortable, powerless sensation, especially those who found themselves on those platforms last week.

But let’s also think about other teachable moments that haven’t faded quite so far from view. Exhibit A, of course, would be the Russell Hill subway disaster on August, 11, 1995. At about 6 p.m., two afternoon rush-hour trains collided, killing three, maiming another and injuring dozens more. In the aftermath, a coroner’s inquest identified failing mechanical systems and human error, and served up 236 recommendations that it took the TTC almost twenty years to implement.

One of the legacies was that then-TTC chief general manager David Gunn made it his mission to ensure that so-called “state-of-good-repair” expenditures were always the top of the budgetary pecking order. Indeed, his preoccupation with “SOGR” was such that this approach to prioritizing capital spending is now deeply embedded in the way the city allocates funding.

I certainly have no truck with the animating philosophy, but there’s also a risk, now increasingly manifest, that the City is fighting the last war, as generals do.

The TTC, responding abjectly last week, dutifully implicated incorrect operational choices, while Mayor John Tory reiterated how the new signaling systems now being installed will allow more capacity. Yet these incidents revealed that there is virtually no redundancy left in a system that will only see more crowding in the years to come as new lines, like the Eglinton Crosstown and eventually the Scarborough subway, pump ever more bodies towards this interchange.

Which brings me to the question of what responsible civic leadership looks like in the face of conditions that are already far graver than even the most crowd-hardened commuter realized.

From where I sit, it doesn’t look like the guy who’s currently wearing the chain of office. Tory’s attempts to cast himself, in recent days, as a proponent of a relief line ring hollow, given his stubborn advocacy of a wildly irresponsible subway extension, a wasteful highway reconstruction project and a surface rail scheme that does little but suck energy, time and resources from higher priority projects.

The mayor’s inability or unwillingness to head off deadly problems was on full display over Christmas, of course, with the fiasco about the provision of emergency shelter beds in the worst cold snap in decades.

If you’ve been elected mayor (or premier for that matter), emergency preparedness and crisis management are what you learn on day one of any transition process. But differentiating between partisan goals and steadily worsening conditions isn’t just about knowing how to take a briefing.

As I think about this depressingly intractable situation, I have found myself wondering who has the gravitas, foresight and common sense to lead the city and council out of a lethal mess that’s been gathering, inexorably, for decades.

The only person I see right now with that combination of skills is Kristyn Wong-Tam, who forcefully advocated for shelter beds well before the deep freeze hit, and who, in recent days, has pointedly called on voters to make the relief line into an election issue during the fall municipal election.

“Cancelling the Scarborough subway and redirecting funds back to Transit City and accelerating the Downtown Relief Line should be the 2018 ballot box question,” Wong-Tam tweeted last week. “People are going to be hurt —  over-crowding is so dangerous now.”

She’s nailed it, as she almost always does. No partisan hedging, and no appeals to short-term fixes that do little to ameliorate the longer-term risks baked into the system we’ve built for ourselves.

In the starkest possible terms, Toronto’s next mayor needs to do everything in their power to figure out how to prevent the death that we can all see is coming.

In an election that looked to be a coronation for the incumbent, these are now the table stakes. After all, the eventual victim will have a name, and a story that should never have ended the way it did.