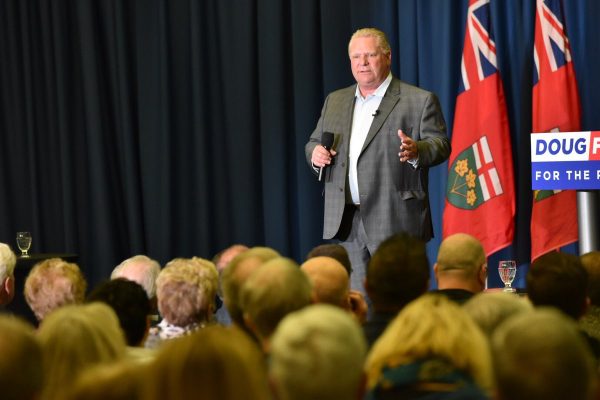 How will Doug Ford govern?

With a week left before he’s sworn in, the most crucial, and also the most elusive, question right now is what will be the form of leadership Ford brings to his new position.

Will he adopt a Trumpian style, peddling a politics of lies, braggadocio, and vengefulness while ensuring that the floor is always tilting this way and that to keep both enemies and friends off balance?

Will he adopt the Beverley Hillbillies style — all insularity and doofus-like mistrust of elites — that characterized the chaotic term that he and his late brother spent atop the civic bureaucracy?

Or will he reveal something as yet unknown (or at least unobserved) in his notion of governing, one that is discernibly tactical and more demonstrably team-oriented than everything in his career to date might have indicated?

Let me begin with number two. I have no special insight into Ford’s personality and thinking, but it seems pretty obvious to me that in some important ways, he’s not going to be quite like the guy who was always looking over Rob’s shoulder between 2010 and 2014.

For those of us who had ring-side seats to the Ford Family Circus, it was clear the brothers had an intensely complex and somewhat destructive relationship, one marked by jealousy and oneupsmanship but also an almost impenetrable form of group think. They egged each other on relentlessly – John and Bobby, but on the other end of the ideological spectrum. On numerous occasions, Doug was also clearly trying to outflank or humiliate Rob; indeed, the power-dynamic between the two was never more evident than the fateful day when the mayor revealed his crack problem in a scrum held while Doug was out of the building.

The clannishness of the Ford family remains in tact. But I do think it’s relevant that Ford will not spend long days in the company of a politically like-minded sibling whom he both admired and resented.

Yes, the Office of the Premier of Ontario will be well stocked with ideologues and sycophants and know-nothings. But no one will quite fill Rob’s unique role.

Absent the Rob echo chamber, Ford’s circle of advisors will be institutionally wider. He will have a cabinet and a secretary of the cabinet (correction from earlier version). He will also preside over a large caucus, to half of whom (the 905ers) he owes his victory.

Ford’s team, in fact, includes a growing contingent of people with serious experience in government, especially Stephen Harper’s Ottawa, according to The Globe and Mail. Besides figures like Christine Elliott, Parm Gill and Vic Fedelli and transition team member John Baird, I’d also expect that the new Ajax MPP Rod Phillips, the horse-whisperer (chief of staff) in Mel Lastman’s frequently gong-show-ish administration, will have a key role, not least because he’s worked closely with both John Tory and Liberal finance minister Bill Morneau.

It’s entirely possible that Ford will surround himself with good-ole’-boys and sideline the more moderate characters in his caucus. It’s also possible that he’ll put the big names in the cabinet but then either undermine or ignore them, opting instead to prime the populist pump or egg on the social conservatives.

Still, I think the insularity that the Brothers Ford created for themselves at City Hall will simply be more difficult to attain in a setting like Queen’s Park, where the apparatus of government is so much vaster and more intricate.

All of this is entirely theoretical, and Ford’s early moves provide little evidence of a clear pattern. I found it interesting and salient that he moved quickly to publicly support Justin Trudeau when Trump attacked him at and after the G7. It was a show of intentional solidarity that, to my ear, suggests he had consulted with the Tories in Ottawa and elsewhere who have set aside partisan differences with the Liberals in order to show a united front in the face of sobering trade threats.

At the same time, he quickly sent some love towards the social conservatives in the caucus by foregrounding his plan to overhaul the province’s apparently Sodom and Gomorrah-like sex education curriculum. He has also demonstrated the coy, dog-whistle homophobia that marked Rob’s tenure in the mayor’s office.

It’s also possible to see Ford’s showy bid to both cancel the province’s cap-and-trade as evidence of a denier’s view on climate change, and perhaps a clue that he’s going to follow Trump’s lead and make its his mission to undo much of what Kathleen Wynne achieved in office.

I have every confidence that significant elements of her record will be both dismantled or lustily disparaged, with the climate change moves as Exhibit A. But Ford’s campaign pledge to cancel Ontario’s system and slash gas taxes also reminds me a lot of one of Rob’s signature moves – the cancelation of the $60 vehicle registration tax.

The Fords, it seems to me, have a laser-precise sense of how to re-cast an ordinary car-related irritant – e.g., the regular visit to the gas pump or an annual vehicle levy – as a symbol of government over-reach. I’m sure he spends very little time pondering climate change, but I wouldn’t be surprised either to see him turn up some day at the ribbon-cutting for some flashy, job-creating green energy plant. Rather, what Ford knows is that a pocket-book gesture like a 10-cent/litre reduction in gas taxes will drop a whole lot of capital into his political piggy bank.

It’s also true that such moves don’t necessarily lead to backsliding when it comes to climate change. When the Fords iced the VRT, the provincial government was more than happy to fill the tax room with steadily rising registration fees (the provincial rate has more than doubled since the early 2010s, with such revenues helping to finance the province’s transit construction efforts).

Likewise, as the Toronto Star’s Martin Regg Cohn pointed out over the weekend, the feds can step in and fill the breach with their own carbon tax if the Ford government pulls the plug. In other words, Ford is feathering his political bed by playing jurisdictional whack-a-mole with Ottawa, a time-honoured form of chicken that’s long gone on between Canada’s orders of government.

In short, the carbon tax ball is in the feds court. But Ford hasn’t yet discovered just how aggressively he can play his hand. After all, in the tariff war with the U.S., Canadian governments can use the tariff revenues to compensate industries hit by the U.S. ones. Quebec recently announced it would help its affected businesses, which puts Ford on notice at a time when he’s probably not looking for new ways to spend. In short, he may need to be a bit circumspect in his dealing with the federal Liberals, who are in a position to offer some of that relief.

It’s anyone’s guess as to how this chess game plays out, and who emerges with the upper hand. We’ll all know more when he names his cabinet, and what else he plans to do beyond the four big election promises. For me, the most salient clues about his eventual style of governing will be found in the make up of his cabinet as well as the degree to which he sees his majority as a mandate to erase Wynne’s record.

Then we’ll have an answer to the other urgent question, which is whether Ontario’s got a made-in-Canaa Trump on its hands or someone more like Stephen Harper.