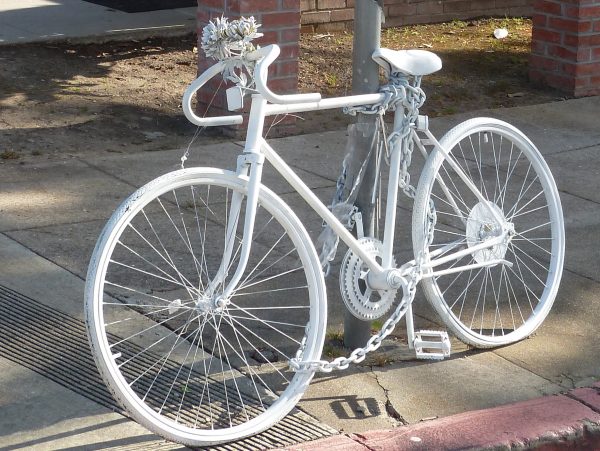 Spacing is inviting candidates who are running for city council this fall to share their opinions on numerous city-building topics. Articles are not an endorsement from Spacing — we hope to create a space for intelligent and informed conversations about the challenges faced by Toronto.

With the recent announcement of $22 million in Vision Zero funding, it’s worth considering the high price Toronto pays for a road system designed around cars. We are averaging the loss of one life every week. As of June 13 — exactly two years following the City’s announcement of the Vision Zero plan to eliminate traffic fatalities — 93 people had been killed on Toronto’s roads.

Nor has designing our city this way made things easy for motorists, as anyone who has sat in rush hour congestion will attest. As people seek alternatives to being stuck in traffic or overcrowded transit, they are turning to active transportation. The cost of that choice for too many has been death or serious injury. Will these new expenditures be enough to turn the tide?

First, we must recognize three things.

Much of our Vision Zero action so far has been to post signs (that are ignored); launch educational campaigns (that are ineffective); or conduct occasional enforcement blitzes (which don’t result in permanent behavioural change).

Instead, we need to use evidence of what works to reduce both the speed and the volume of motor traffic, and address the driving behaviours that make crossing the street a death-defying prospect. Lowered city speed limits is a proven part of the solution, as is banning right turns on red. Increased enforcement and cameras are important in the short term, though these are costly solutions that penalize drivers rather than change driving conditions. There will be less need for such measures once road design has improved.

Design changes must include putting speed humps or other traffic calming measures in all school zones in the next four years. Such changes will make the streets safer for those currently on foot, as well as those who wish they could allow their children to walk to school on their own but are too afraid of current road conditions to do so.

Creating wide, accessible sidewalks will allow people with mobility challenges to participate fully in public life, not be isolated or dependent on help to navigate their own neighbourhoods. Where sidewalks are lacking, we must add safe infrastructure so that people are not forced into close proximity to large speeding vehicles. In areas where people regularly cross the street on a dangerous stretch of roadway, a safe crossing must be put in place. Admonishing people for jay-walking (though mid-block crossings are perfectly legal), or urging seniors to walk half a kilometre out of their way to cross the street to their TTC stop is unrealistic and unfair.

Then there is the relatively simple matter of traffic signals. Timing is often too short for people to get across the street, and intervals between crossings can be so long that people risk crossing on a red light. When we accept that safety is of paramount importance, the need to change signal timing to favour pedestrians becomes clear. In places with high volumes of foot traffic, pedestrian scrambles — where people can cross diagonally if they wish — are a safe, friendly option.

To lower traffic volume, we must make other options attractive for those who wish to get out of their cars and free up space on our congested roads. Too often the need for bike infrastructure is disputed. Cyclists are depicted as a small group of hard-core advocates — categorized in a Portland study as “strong and fearless” — who will ride (and get in the way of drivers, seen as the rightful owners of our public streets) no matter what. This disregards the lives of people who now cycle and neglects the many “interested but concerned” people who would like to ride but are simply too afraid. A minimum grid of fully protected bicycle corridors across our entire city would attract those potential riders, presenting a great opportunity to reduce congestion at a fraction of the cost of expensive road infrastructure. Connecting routes within and between neighbourhoods will enable more choice for more people of how to get around in their communities.

Finally, we need to integrate safety, choice and accessibility in all decisions around transportation. If we do that, decisions such as the one around whether to narrow Yonge Street north of Sheppard and south of Finch will be far less contentious. Transforming that corridor into a pedestrian and cycle friendly Main Street, lined with businesses and safe for neighbouring residents, while still including four vehicle lanes, should be approved without any further delay.

While council’s decision to increase funding is a welcome sign that calls for action are being heard, it is still woefully inadequate compared to what is needed to make our streets truly safe. We have no problem spending billions on an unproven subway stop, or rebuilding an obsolete expressway, yet we are still spending a pittance on safety compared to jurisdictions like New York City that have effectively lowered their traffic death rates. Until we commit to a meaningful increase in spending on measures already proven to be effective, and until we adopt transportation policies — like Transform Yonge — that reallocate space from cars to people on foot or two wheels, we are only paying lip service to the issue, and will continue to see unnecessary loss of life.

Ultimately, along with saving hundreds of people from the grief and suffering that comes with tragic occurrences on our roads, Toronto will experience many gains as we transform from an auto-oriented city to a people-oriented one. Even those who drive will be better off — Netherlands, a country long associated with a safe and widespread active transportation culture, was rated in the Waze survey as the best place in the world to drive in. When our streets are designed with people in mind, our population will be more mobile, healthier, and happier, while our city will be more equitable and accessible. We have nothing to lose, and everything to gain.