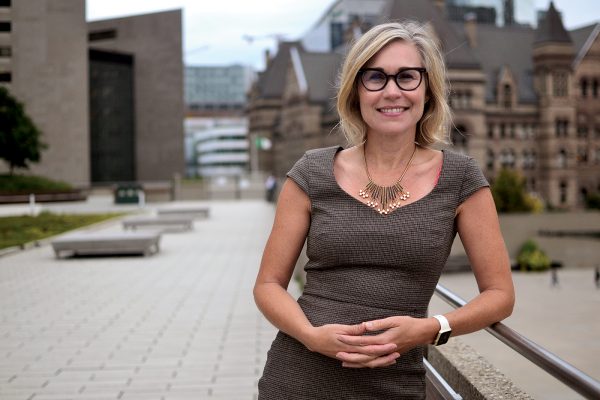 Almost a year ago, the Toronto Star’s Jennifer Pagliaro published a story detailing, with her trademark meticulousness, how then chief planner and now mayoral candidate Jennifer Keesmaat had gone to great lengths internally to find ways to block the Scarborough subway.

For months, she wrote, Keesmaat was “trying to make it known to anyone who would listen that a seven-stop light-rail line the province had already agreed to pay for, and the city had already approved, was still the better option.” Pagliaro had retrieved dozens of documents illustrating how Keesmaat repeatedly challenged her bureaucratic betters about the wisdom and economics of recommending three (and then one) stop subway over an LRT network serving three priority neighbourhoods.

“It is a significant overbuilding of the needed infrastructure,” Keesmaat wrote in one memo to a council staffer and obtained by Pagliaro.

Now, three weeks and a handful of policy pronouncements into Keesmaat’s candidacy, my question is this: Where is the city planner who had been such fierce and courageously outspoken opponent of a manifestly wasteful megaproject?

When Keesmaat entered the campaign, I expected her — perhaps naively — to make the cancellation of this $4 billion boondoggle into the campaign’s defining wedge: a raucous point of distinction and a sure-fire ballot question.

It is entirely possible that with the dog days of summer and vacation season fully upon us, Keesmaat and her advisors have opted to keep their platform powder dry, and wait for the right (re: post Labour Day) moment to begin hammering Tory for backing this project.

But it’s also possible that the unforgiving logic of Toronto’s electoral geography, plus the lightning bolts emanating from Queen’s Park, have caused Keesmaat to re-consider the wisdom of hanging a target on her back.

I hope the answer is what’s behind curtain number one, but I wouldn’t be surprised by the more pessimistic explanation.

(Update: About an hour before this post went live, Keesmaat released a strong statement and then a series of tweets about the crisis in transit planning and Tory’s failure to deliver on his promise to make the Relief Line a top priority.)

A couple of observations here: First, the Keesmaat campaign may already be in danger of allowing Tory to permanently frame her candidacy. The mayor and his spin doctors seized upon Keesmaat’s unfortunate (and short-lived) digression into the absurdist rhetoric of secession. Since then, his team has eagerly deployed a classic red-baiting trope, seeking to brand Keesmaat (first in words and now with colours) as the NDP candidate. 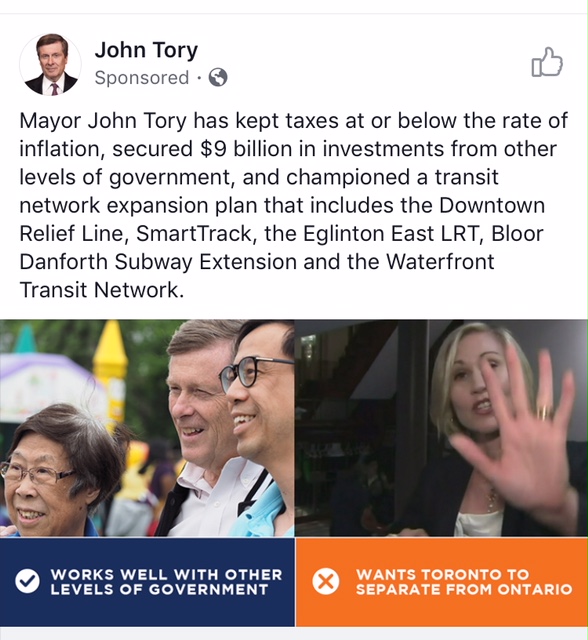 (She’s not, although it’s always worth saying that the NDP-related candidate who beat Tory in 2003 — one David Miller — was responsible for a spectacularly lucrative new revenue source that has permitted his two conservative successors to retain low homeowner property tax increases for going on a decade now.)

All this has allowed Tory to put Keesmaat on the defensive, and therefore deflect attention from the big troubling issues with which a high profile candidate should be challenging the mayor: three extravagantly expensive, ill-considered, and financially ruinous infrastructure projects (Gardiner, Scarborough subway, SmarTrack); the stubborn inaction on broadening the city’s revenue sources; the steady rise of shootings and gun-related homicides; the sluggish progress on affordable housing.

The tentativeness of her campaign so far is also letting Tory off the hook — at least a bit — for his evidently timorous response to Doug Ford’s attack on council (the Tories have introduced legislation that reduces council from 47 to 25 wards in the name of efficiency). The latest development is the notably deferential letter Tory sent up to the Pink Palace on Friday, “urging” the premier to put the restructuring on hold and asking for permission to hold a referendum.

Ford has succeeded in cowing Tory into adopting a hyper-cautious stance mired in process questions and legalese. But many voters are wondering, and with good reason, why Toronto’s mayor didn’t simply tell the premier to take a hike.

Keesmaat, who apparently filed her papers because of Tory’s mealy-mouthed response the day after the news broke, should be reminding voters every single day that as mayor, she would do whatever it takes to defend local democracy. I am not sure why we’re not hearing her driving that message home.

There’s one other point that bears noting, and which has been conspicuously absent from the race so far: the respective candidates’ stances on Ford’s campaign promise to upload the subway network.

My operating assumption about the province’s move to slash the size of council is that the populist blather about the pace of council meetings is merely a smoke screen for some longer-term structural depth charge; the subway pledge/threat seems like a good candidate.

If the Tories actually intend to scoop the TTC’s subway lines, I’m guessing they’d much prefer to be dealing with a compliant mayor and council, which is what we’d likely get from a reduction in council size.

The province is within its constitutional rights to pass an Efficiency in Rapid Transit Act (2018), which uploads and then merges Toronto’s municipally owned subway assets with Metrolinx or GO.

But the administrative reality is that breaking up the TTC would be like the Brexit of local politics. There would be exhausting and time-consuming negotiations over fare revenue and debt allocation, budgeting, governance, planning, land ownership, air rights, etc. The city earmarks Section 37 revenue to transit capital, so what happens to that income? Also, council late in Ford’s term also approved a 30-year transit infrastructure tax hike that will contribute almost $1 billion to the Scarborough subway extension’s capital cost. If the province uploads the subway, what happens to all that money?

No one is talking about any of this. Why? Are we all terrified now of provoking the premier? Bullies like Ford can smell fear, so I’d argue that the silence and tentativeness not only plays directly into his hands, but also provides the government with ample space to frame this radical move politically.

For all his faults, Mel Lastman, early in the days of his stint as mayor of the megacity, was pushed to the point where he publicly stood up to Mike Harris, accusing him of being a liar. (Harris partially capitulated.) Toronto requires another infusion of that kind of political chutzpah.

This weird municipal campaign, which hasn’t really lurched out of low gear, desperately needs a candidate who is prepared to call out both John Tory and Doug Ford’s Tories.

I hope Jennifer Keesmaat is prepared to become that candidate, and do so before it’s too late.