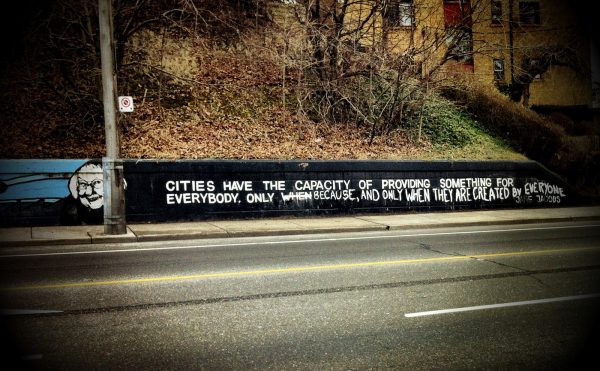 My favorite item of clothing is a black t-shirt emblazoned with a trenchant question:

“What Would Jane Jacobs Do?”

I have an entirely forgettable wardrobe. This t-shirt, however, is fascinating for the engagement it provokes (editor’s note: the t-shirt is a Spacing product). People see it and start talking to me: “What would Jane Jacobs do?” some ask. “Who is Jane Jacobs?” others wonder. Then there are those who venture an answer. A voluble man at the park recently laid out an elaborate and slightly drunken case for completing the Eglinton LRT to the airport. “That,” he declared, “is what Jane Jacobs would do!”

Since Doug Ford was elected, my shirt has generated more than the usual amount of feedback, especially after the introduction of Bill 5 and the ensuing theatre of the absurd at Queen’s Park (including the wee-hours second reading debate that played out early this morning). In the past few days alone, one woman told me, “She’d move back to New York.” Said another: “she would be weeping.”

To be clear, I have no idea what Jane Jacobs would do. Rather, I prefer to think of the question as a civic provocation — a continual challenge for all of us to think about what’s best for the city and its residents, because that is what Jane Jacobs did.

So, to my two recent interlocutors, I will say that you’re probably dead wrong. If Jane Jacobs were alive to witness the surreal chaos taking place since Ford came to power, she wouldn’t flee or despair. My bet is that she would be girding up for battle, and, what’s more, relishing the prospect.

Over the past several days, I’ve tried to imagine my way into the mind of the woman who defeated transportation czar Robert Moses in New York in the 1960s, and then came to Toronto and reprised her victory against the Metro bureaucrats plotting to destroy the downtown with a grid of freeways in the name of efficiency.

Here are some educated guesses about how she’d respond to today’s events:

Jacobs wasn’t shy about making her views known to those in power, and I’d expect she would have phoned up Mayor John Tory by this point and told him, in no uncertain terms, to get on with debating Jennifer Keesmaat about the future of Toronto. The mayor’s unseemly tactic of trying to avoid one-on-one mayoral debates with Keesmaat is not only disgraceful, but also contrary to the fine tradition of extensive mayoral discourse in Toronto elections (and in which he has participated).

His tactical reticence means that Toronto voters — who have had their election all but snuffed out like a dying ember — won’t have a proper opportunity to judge for themselves who among the two leading candidates is best suited to stand up for Toronto in the years to come. Indeed, Tory’s disinclination to engage with Keesmaat poses troubling questions about further capitulations in what I fully expect to be the Tories’ aggressively interventionist approach to the city.

Jacobs, I suspect, would have dismissed the Ford government’s entire assault on the Toronto as illegitimate from the get-go, constitutional division of powers included. What’s more, I doubt she would have expended much energy rebutting the Tories’ specious justifications (inefficient council meetings).

The out-pouring of criticism about the Ford government’s unprecedented bid to suspend Charter rights is crucial, but there’s another important point that’s been overlooked — one which speaks to Jacobs’ deep belief in grass roots accountability and the vitality of urban economies.

My reading of Jacobs’ worldview is that she would be reminding us of the intimate relationship between a city’s liveability and those local governance structures that encourage, as oppose to minimize, civic engagement.

Long and even difficult debates about the city’s shape and its future are features, not bugs.

Evidence? Consider the fact — weirdly overlooked in this extravagant mess — that Toronto now consistently scores at the top of global rankings for liveability, business costs, and the vitality of sectors like tech, financial services and health care. We have more cranes in the sky than any other place in North America, and 7 million square-feet of new office space under construction in the core alone. Tourism is soaring. And though we’ve had a lousy, violent year, crime remains low for such a large municipality. If council and Toronto’s local government was as gridlocked and inept as Ford alleges, how did the city generate so much success?

It’s also worth remembering that the deep engagement of the local residents and business people who halted the city-killing infrastructure projects in the 1960s laid the foundation for the wealth of present-day Toronto. We need more of this, not less.

In other words, to dismantle or hobble institutions of civic engagement in order to shave a few hours off monthly council meetings is to gamble with the vitality of the core of an urban region that generates half of Ontario’s GDP, and therefore pays for much of the social, health and infrastructure provided to the rest of the province.

Bill 31 and the threatened subway upload won’t sate Ford’s hunger for upending local government in Toronto; what we’re seeing now is just the beginning. So I’d say it’s entirely appropriate at this point to ask whether the Ford government’s campaign is destabilizing to the city’s economy. To my eye, his threats and the chaotic way his government has conducted this first attack telegraph uncertainty and raise the question of whether he’s going to kill the goose that laid the golden egg.

Because the provincial government invoked the nowithstanding clause, the mounting opposition to Bill 31 has succeeded in engaging large swaths of the legal community as well as nationally prominent public figures across the political spectrum.

Now it’s time for the city’s business community, the non-profit sector, the post-secondary sector and civic advocacy groups to speak out. After all, these are institutions with much to lose if Ford commandeers municipal government in Toronto.

One of the key lessons of the Stop Spadina movement is that Jacobs and the other organizers were relentless in their push to broaden the coalition’s base, forge non-partisan connections to individuals in a position to influence government decision-making, and demonstrate the economic and land-use implications of Metro’s destructive plan.

I only interviewed Jacobs once, and that was about 15 years ago when the city was trying to revive an ill-considered scheme to drive a mini-expressway from the Gardiner, through Liberty Village and on to the corner of Front and Spadina. She wasn’t in an especially talkative mood when I called – Jacobs was elderly by then, and still had a lot of work she wanted to complete – but warmed to the topic when I said I was interested in her views on the Front Street Extension.

One comment stuck out and seems as relevant today as it did this: “To stop a freeway,” she said, “you need to kill it three times.”

So what would Jane Jacobs do? She’d be digging in for a long fight.