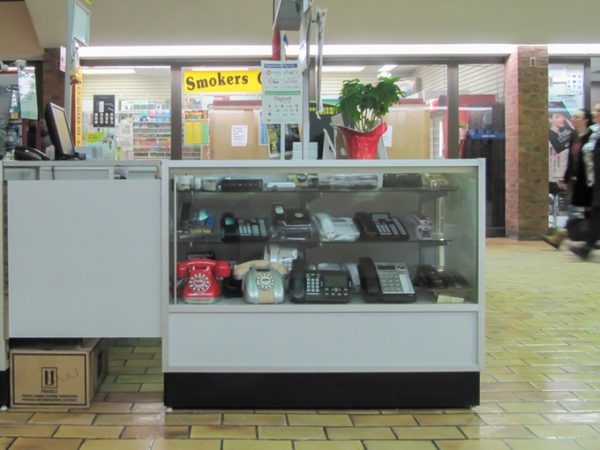 Shari Kasman is a long-time contributor to Spacing. We will be selling her book in the Spacing Store when it’s published this fall.

Support her Kickstarter campaign to get the book printed

Galleria Mall in Toronto’s west end is notorious for its stuck-in-the-past aesthetic. It was built in 1972, and has served the neighbourhood ever since. Sadly, operations there are winding to a halt as the property was sold to developers a few years back. Although the mall still stands, the arcade games have recently disappeared, the El Amigo food counter has closed, and independent stores have either shut down or relocated. The mall will be around for a while longer, though, as the chain stores, like the grocery and liquor stores, will continue to function until the day a bulldozer smashes through the mall’s brick facade. So, to memorialize the mall I’m making a book filled with captioned photographs of Galleria Mall and relevant shopping mall information.

Although I’ve spent most of my life in Toronto, I didn’t visit the Galleria until a decade ago, when I moved close by. It was a convenient place to do banking and buy wine, but also, it became a place where I’d go to temporarily transport myself to another era. Beforehand, I’d almost forgotten what rotary-dial phones looked like. I was amazed how the mall managed to stay so true to its origins when in most other instances, new tiles or chrome detailing have entered the picture. Even the Galleria’s little cousin, Crossways, at Bloor and Dundas West, has had a makeover, though in that case it’s as if it’s just wearing a silly wig—you can still see its ‘70s-era charm peeking through.

There are malls in various states of neglect and/or disrepair worldwide, and the retail apocalypse has recently sent malls in a downward spiral, especially south of the border. Whereas some malls empty out and have zero foot traffic, the Galleria is far from useless. Yes, it’s been a place to pick up frozen pizza and a digital watch, but it’s also functioned as a quality second living room for many community members, especially older Portuguese men. Plus, there have been annual parking lot carnivals and celebrations for holidays that have included magic shows and accordion music.

A little over five years ago I began to capture the essence of this special place since I was captivated by its aesthetic and knew it would be plowed down soon enough. Within a one-year period, July 2013 to 2014, I took hundreds of pictures in and around the mall. These photographs focus on the mall’s structure, design, and festivities. I was curious as to how the mall wound up as is, which led to my fascination with malls in general, and so I borrowed all the library’s shopping-mall books.

Over the past five years, while working on this book project, I’ve been sidetracked by a number of art and writing projects, but still had the Galleria book on my list of things to do. In the meantime, I made smaller mall items that were easier to produce, like Galleria postcards—I’d seen Toronto postcards with the CN Tower or Casa Loma on the front and I thought sending a postcard with a picture from the depths of the Galleria would be a good alternative. I later led a few Jane’s Walks at the mall, each with a slightly different focus, covering topics that included the history of the site and the mall, the present and future of the Galleria, and parking lot problems.

Although the Galleria has always been important to the surrounding community, it’s an underperforming mall that has faced troubles as far back as the ’80s. Issues with finding retailers and keeping clientele have persisted until the end. There were many times over the years when forward-thinking plans were developed to create positive change at the mall. There were proposed design improvements and plans to add residential space in the ‘80s and mixed-use development proposals in the ‘00s. These plans either wound up in filing cabinets or framed and hung on the walls of the management office.

Actually, a couple of years ago, I found framed drawings. Two of them seemed to show options for the original interior design scheme, complete with colour chips indicating the mall’s colour palette. Then there was a rendering that included skylights and a carousel and another with fluorescent banners. I recently tracked down the designer who was hired in the ‘80s to rejuvenate the mall. He’d even proposed installing an indoor playground. Unfortunately, the mall owners didn’t follow through with the plans to align the Galleria with the original intention of the mall: a venue for shopping, socializing, and entertainment where the interior mimicked the outdoor world, with natural light streaming into a plant-filled space, with a fountain in a central area, beneath skylights. I was curious about the building’s design and coincidentally, a friend had dug up the plans when his architectural firm was working on a related project. In looking at the drawings, I saw that every single brick was intentional. It was constructed entirely antithetical to the original vision of how a mall should be. This one-storey urban mall was not an accident.

Unsurprisingly, the recent disappearance of stores and food options hasn’t affected the community-centre nature of the mall. It remains a free, climate-controlled space where friends gather and can stay as long as they’d like, as long as the mall’s open. There are even free copies of a Portuguese newspaper.

The book’s 100+ captioned photos include some of my favourite moments at the mall, including the snake show at Christmas. The mall was busy enough that there were more people than snakes at the event, and Santa Claus was there, watching the security guards pose with those crawling creatures. There are pictures of storefronts and the Hallowe’en display complete with a blow-up vampire in a coffin. Captions offer insight into all things Galleria, one person’s view of a local time capsule.

The mall was finally sold in 2015 and discussions about the future of the site began not long after. Because of my interest in the Galleria, I was involved in the consultation meetings with urban planners, developers, City staff, a transit planner, architect, landscape architect, perhaps a couple of other people in suits, and a few members of the community. This provided insight into future plans, but there was no interest in recreating a ‘70s-era time capsule in the lobby of any of the new buildings. I’m sure none of their eight towers will include the Galleria’s colour scheme, but maybe they can install pot lights that shine green light throughout the corridors as a tribute to the mall.

My book is informative and topical, humourous and a little sad, and an honest portrait of an urban mall that’s always been useful, but in terms of appearance, never quite made it past the ‘70s. It hasn’t been the most popular of malls, but it’s a mall that’s been there for the community, stranded within an underused parking-lot ocean this whole time. My hope with the book is to preserve memories of this iconic Toronto shopping mall while placing it in the context of the global shopping mall situation, as well as providing insight into decisions made along the way that ensured the mall’s retro aesthetic would persist into the 21st century, right up until the mall’s final days.