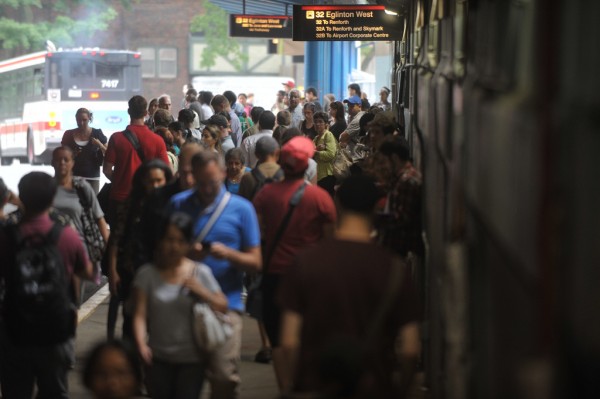 Editor’s note:  Spacing is pleased to introduce you to our new urban affairs columnist, Patricia Burke Wood. Tricia is a geography professor at York University and a co-founder of its City Institute. She’s a Montrealer by birth, a New Yorker/New Jerseyan by formative years, and now a Torontonian because that’s where she got a job. She worries about climate change, inequality, and the inadequacy of liberal democracy. Also a Sens fan.

In February 2018, two TTC fare inspectors tackled a 19-year-old young man as he was exiting a westbound St. Clair streetcar at Bathurst St. in Toronto. He was pinned to the ground. Police were called and the teen was handcuffed and placed under arrest. He was later released without charge. The young man is Black.

He and his mother are suing the TTC and the police, alleging “unlawful detention, assault, battery, negligence, discrimination, and racial profiling.”

It is, sadly, not difficult to find instances in any Canadian city of racism directed at passengers on public transit. When that abuse comes from officials, it is even more serious. Hiding that abuse behind the “enforcement” of fare policies is not a just or appropriate of dealing with the problem.

We need to talk about the way we as a society discipline and punish our fellow citizens, and we need to have a close look at who we choose to discipline and who gets the second chances.

We need to reconsider the role—or even the existence—of fare inspectors. That’s part one of the conversation.

The reality is, anyone can get caught short, with not enough cash in your pocket or a fare card with an insufficient balance. If you’re boarding a bus, and have no means of topping up, you’re stuck. A City Council member in Washington DC pointedly admitted that it happened to him often, but that, because he is a white man in a suit, no bus driver had ever gotten him in trouble or refused him service.

Since the introduction of all-door boarding in Toronto, riders are supposed to have a transfer or other proof of payment when on a streetcar. Those of us who have been taking the TTC for more than half our lives sometimes forget this is the new practice. Changing from the subway to a streetcar at St. Clair, St. Clair West or Spadina happens inside the station so there’s no cue to take a transfer. More than once, I’ve suddenly realized I’m on a streetcar without proof of payment, even though I paid my fare.

It’s an easy mistake, and the loss, if any, is minor.

And yet fare evasion is utterly demonized. Mayor Tory made a “joke” about publishing in a newspaper the pictures of those caught for fare evasion, because “they make the rest of us pay.” Even Joe Mihevc has publicly fumed about evaders ripping us off, arguing we have less service because of it. Some have estimated the loss at $20-30 million. (Some have suggested that figure is much higher, but non-functioning Presto machines make it very hard to determine how much is actual fare evasion.)

A least one witness to the St. Clair streetcar incident said the young man looked like he was trying to avoid the fare inspectors and that he even shoved one of them to get off the streetcar. It doesn’t matter. The loss of a $3.25 fare does not merit placing hands on someone. It does not justify throwing them to the ground and calling the police.

Fare evasion is a petty theft. It does not merit shaming or lethal force. Have you ever taken home paper clips from the office? It’s not ok, but neither is it worth starting a Paper Clip Task Force, posting mug shots by the water cooler, and tackling people as they head out the door.

We need to think long and hard about any desire to shame people for small infractions, and how that desire might shape the way we discipline people’s behaviour.

Funny how the City is comfortable with, for example, writing off $1.4 million in rent and taxes from Harbourfront Centre, because they can see why it is unable to pay and the benefits of the Centre to the city are clear. Funnier still, how wealthy private golf courses in Toronto get tax breaks.

Punishing poor people for being poor is truly shameful.

Washington DC has been having a serious conversation about this. Previously, the maximum penalty for getting caught for riding without proof of payment, which is a criminal offense, was a $300 fine and the possibility of jail time. They’re proposing to eliminate any jail time and reduce the fine to $100. Three years ago, they decriminalized fare evasion for youths.

In 2008, San Francisco decriminalized all transit citations, including fare evasions. In 2016, California extended this to the entire state. The same has been proposed in New York City.

Fare evasion is about policing poor people, but it’s about more than that. A 2017 study [pdf] done in New York found that Black and Hispanic people were grossly overrepresented in fare evasion citations, and arrests were more frequent in poor neighbourhoods.

We (especially White people) need to take racism more seriously than we do. We’re so casual sometimes when we even acknowledge the existence of racism in our city. Like it’s an annoying bug to swat away.

Racism is toxic. Treating anyone as if they are less deserving, less worthy, less human in any way is corrosive to them and to you. It diminishes our humanity. It poisons our society. There are many ways in which we treat each other with disrespect, and none is acceptable. But I want to make a case for the extraordinary damage that racism causes, because individual acts do not stand alone; they are additional links in a chain of exclusion, hate and violence that goes back a long way.

Racism on public transit is a serious issue, because transit is a critical public space. Mobility is a necessary part of life in a city. Cities are interdependent economies, where we rely on others for all kinds of daily goods and services. In order to thrive, we need to move.

Public transit is as essential a service as housing or education. To bring the toxicity of racism into that space is to reduce access to the city and all it provides to all people targeted. And it is important to recognize that the individual young man tackled by fare inspectors is not the only victim. Every Black person, every Indigenous person, every person of colour who witnessed it, saw the video, or heard about it, felt a little more afraid of the city around them.

The priority of public transit management should be its service to all riders. The economic contribution that is made by transit does not come from its fare box. It comes from the economic participation and wealth production that are enabled by better mobility. Access to that mobility is a fundamental part of everyone’s well-being.