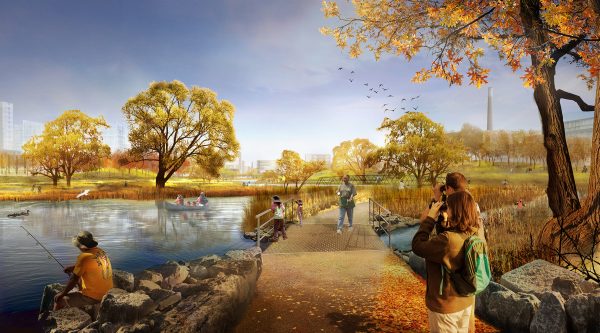 The long-awaited auditor general’s report on Waterfront Toronto (WT), released yesterday, is really two evaluations for the price of one.

Part of the 61-page document takes aim at WT’s contentious deal with Sidewalk Labs, the Alphabet/Google smart cities start-up that has been a negative-headline-generating machine for more than a year. On this topic, AG Bonnie Lysyk and her audit team offer up a series of recommendations that hew closely to emerging critical consensus about the proposed Quayside project – that it demands an entirely new type of oversight and governance given SWL’s stated goal of deploying high tech sensors to collect personal data about the use of public space.

But the balance of the report is a surprisingly tone deaf and often muddled account of WT’s mandate and operations, one that reveals scant understanding of brownfield planning or even the geography that falls within WT’s jurisdiction (tellingly, the word “brownfield” doesn’t appear once in the report). Indeed, it reads like a document written by accountants who never bothered to leave WT’s offices to actually see the spaces that the agency is tasked with redeveloping.

If this document were just another report destined to return to the maw of the bureaucracy from whence it came, I wouldn’t be especially fussed about Lysyk’s slack analysis. But Premier Doug Ford’s infrastrature minister Monte McNaughton is already threatening WT with an epic spanking, so the tragedy of her report is that it seems likely to become the battering ram that Ford will use to exact revenge on an agency he worked very hard to gut early in his brother’s term as mayor (and which produced the Rob Ford administration’s first resounding loss in council).

As for the AG’s generally sage recommendations about oversight of the Sidewalk deal, well, I think I’m not going out on a limb in concluding that Ford’s Tories won’t take much interest in the challenging, and unprecedented, task of inventing the sort of agile 21st-century regulation required to manage smart cities.

Let’s take a quick dip into the Sidewalk content. Likely in response to long-standing speculation that WT wrote the Quayside RFP for Sidewalk, Lysyk’s audit team went looking for the smoking gun.

A search of internal emails revealed one — from WT’s 2IC and dated 2016, a year before Sidewalk emerged as the winner of the Quayside RFP — that said the agency was “very interested” in Sidewalk’s work and wanted to discuss a potential pilot. However, at the very end of Lysyk’s report, in an appendix detailing the SWL timeline, she acknowledges that WT officials sent out 50 such solicitations to local, national and international firms as part of its routine “market sounding” processes.

In other words, the AG’s report should put paid to the conspiracy theories that the Sidewalk deal was rigged from the get-go. The explanation for how we got here lies elsewhere.

The rest of the report is far less illuminating, and suffers from an abundance of damned-if-you-do/damned-if-you-don’t analysis. Lysyk effectively blames WT for a set of political decisions, taken in the late 1990s and early 2000s, that produced the agency and its specific mandate – a classic example of backwards logic.

Those with long memories will recall that the whole operation was established by the Jean Chretien, Mike Harris and Mel Lastman governments to help win the 2008 Olympic bid. From the beginning, the agency was supposed to carry out tasks related to the bid book’s promises, but less specifically oriented towards creating waterfront public spaces and development, e.g., enlarging Union Station, tearing down the Gardiner, etc.

The late planner Tony Coombes came up with a prospective structure for a development agency that could streamline planning approvals, and was modeled on projects such as Canary Wharf in London or Battery Park in New York. But at the time, neither the province nor the city were prepared to relinquish complete control, so WT was designed such that the three government shareholders had plenty of oversight, via the board but also a convention of approving “contribution agreements” to specific projects.

What’s more, the agency’s main task was to carry out all the unsexy work that no one sees but is essential to brownfield revitalization – EAs, precinct planning, municipal infrastructure, clean-up, etc. WT was also charged with creating vibrant public spaces that would attract investment, and it is difficult to argue that the agency has failed on this score, no matter how you torque the arguments.

Yet Lysyk’s team uses these details, and others, to argue that WT has wasted its funding and failed to deliver the goods. She makes a great big deal about how WT’s funds were used to finance projects carried out by other agencies, but barely acknowledges that those projects were almost all conceived to support waterfront revitalization. In two cases where projects didn’t go forward, the responsibility lies with the government partners that vetoed the outlay, not WT.

In a section about the $1.25 billion earmarked for the flood protection berm that will remake the mouth of the Don River and allow large-scale mixed-use development to occur both on the Portlands and the Unilever site, Lysyk states that the contingency allowance in the budget is too large – a perverse conclusion, given not only the complexity of the undertaking but WT’s on-the-ground experience with other projects on real estate created from landfill (e.g., the Queen’s Quay West reconfiguration).

She also complains about overlapping mandates, citing, for example, the two-year negotiation between TEDCO, a precursor to CreateTO, and WT over the Corus project at the foot of Jarvis on the south side of Queen’s Quay East. It’s a weird conclusion: that negotiation, though tense at the time, produced an excellent public space and has attracted hundreds of millions in both private and public sector development north and east of the site. Rome wasn’t built in a day, and nor will Toronto’s waterfront.

However, the single most telling detail about the superficiality of Lysyk’s assessment can be found in her repeated insistence that WT should look to places like Winnipeg, and The Forks, or Chicago, and Millennium Park, for inspiration on how to carry out successful waterfront revitalization.

The comparisons are absurd on their face. The Forks is a 14-acre Winnipeg playground which has yet to generate a full range of development; Quayside is 12 acres and the Portlands, just to the east, is 2000 acres.

As for Millennium Park, it was never a brownfield site – the park was built over a parking garage on the south side of Michigan Avenue in downtown Chicago, and went dramatically over-budget, while Richard Daley, then the mayor, shook down all his corporate cronies for multi-million-dollar “philanthropic” contributions. Basically, it is precisely the sort of public project that attracts the opprobrium of auditors general.

If I haven’t yet convinced you that the AG missed the forest for the trees, consider this: the report completely neglects to account for the late 2015 decision by WT’s board to hire Will Fleissig as its new CEO, a move that set in motion the Sidewalk deal and the tsunami of negative publicity that has ensued. She has nothing to say about why the board allowed Fleissig, who has since been deposed, to drastically change WT’s generally successful approach to precinct planning and public consultation.

Indeed, I’d argue that the reason WT found itself in the crosshairs is directly connected to the consequences of regime change. If WT’s board had made a better hire, and avoided the temptation to fix something that wasn’t broken, we wouldn’t be having this discussion. Nor would Ford’s ministers have been handed a convenient cudgel they can use as an ex post facto justification for what’s to come.

And what is to come?

Who knows what McNaughton has in mind, although we’ll learn soon enough what his promised mandate review will include. Knowing what we know about the Tories’ approach to governing, I’d say it’s entirely possible Ford & Co. will use Lysyk’s report as an excuse to either withdraw or hold up Ontario’s $400 million-plus contribution agreement to the flood protection project.

That sum, needless to say, is an enticing piece of leverage that Ford can and likely will use to extract some unspecified concession, either from the feds or the City, which owns much of the brownfield land on the waterfront.

In the name of efficiency and job creation and being open for business, the Ford government will almost certainly throw a massive monkey wrench into this historic city-building project. And then just watch: the river of investment dollars that have flown into this emerging part of the city will dry up as surely as day follows night.