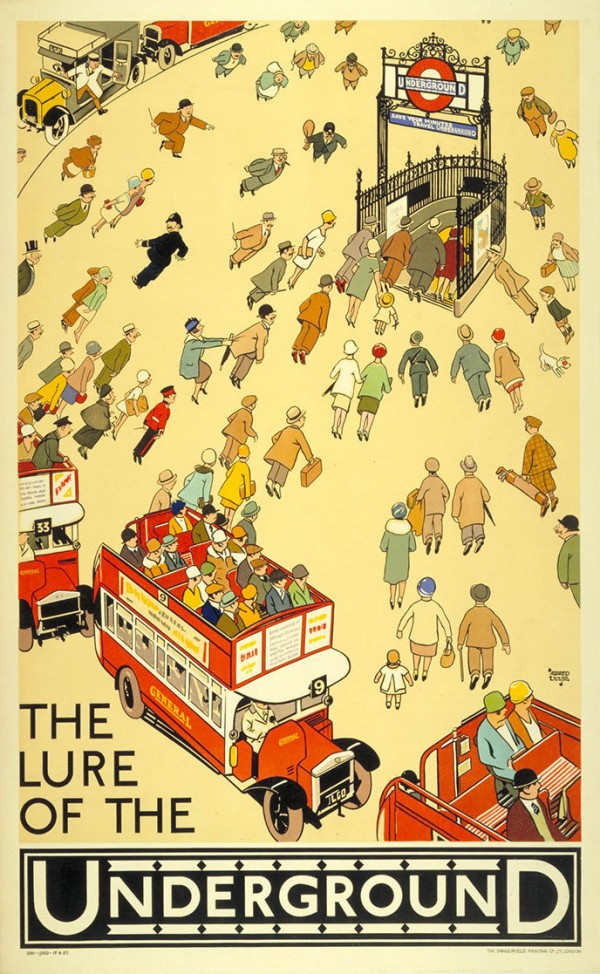 As the province contemplates major structural change to Toronto’s transit system, I want to offer London’s rocky history with transit governance as a cautionary tale.

It is a favourite pastime in some transit circles to compare Toronto to London. For example, John Tory has compared his SmartTrack plan to the London Crossrail project, and even made a special trip to London on this premise.

He wasn’t referring to the fact that Crossrail is at least two and a half years behind schedule so far, or that it’s been refinanced several times and is now £2 billion over budget, or that he thinks SmartTrack’s relative handful of potential riders compares to a line that will carry 1.5 million additional riders.

It is true they are both rail projects. Although, if we are being precise, SmartTrack is a station project, not a rail project.

One area in which I think Toronto should aspire to be like London is in its transit agency, Transport for London (TfL). I’ve written elsewhere about how I admire its comprehensive oversight of mobility, and its ability to regulate and coordinate not just trains and buses, but cars, taxis, cycling and the pedestrian realm.

More than that, however, because TfL is an agency of the Greater London Authority, TfL is a good solution to the complexity of coordinating mobility across many jurisdictions within a metropolitan area the size of Greater London.

We are moving in the opposite direction. Metrolinx is not TfL. The subway upload will not create anything like TfL. Rather, they are the disaster that preceded it: Margaret Thatcher’s London Regional Transport (LRT).

Thatcher created the LRT organization in 1984, replacing the London Transport Executive, an agency of the Greater London Council since 1970. The LTE had been made up of local government agencies, which were severely underfunded by the central government.

The new LRT was a state-owned agency directly overseen by the Secretary of State for Transport. The explicit goals of uploading London transit to the central state were cost reduction and privatization. In 1985, the system split the subway and the buses into separate entities under the umbrella of LRT as a holding company.

The upload of London’s transport was followed by the Local Government Act of 1985, which demolished the Greater London Council, reducing local government in the London region to its boroughs. Sound familiar?

Funny how they used the word “regional” in the name of the new transport agency, in the same moment they eliminated the “regional” government for the same area. The “London region” became a free-form economic and transportation space lacking clear borders, no longer a political jurisdiction with the capacity to govern itself.

The upload led to tragedy

Thatcher’s central government did not take good care of their new baby. According to Alex Williams, TfL’s current Director of City Planning, “The tragedy of the King’s Cross fire, in 1987, which killed 31 people and injured 100 more, brought home to everyone the extent to which a significant part of London’s transport network had become obsolete, dirty and unloved.”

Desmond Fennell led the formal investigation into the fire. His report (Investigation into the King’s Cross Underground Fire, Department of Transport, 21 October 1988) supports Williams’ present-day comment. The report noted, “It is apparent from the evidence given by the Chairman that whereas financial matters, namely productivity and budgeting were strictly monitored safety was not strictly monitored.” (p. 27) It is fair to say that Fennell was not impressed with the agency’s management: “It may be an indication of the compartmental approach to management within London Underground that no up-to-date or complete chart showing the level of responsibility at which decisions were being taken was available.” (p. 34)

In 1992, the LRT started privatizing the bus services. Competition led to unethical, even criminal behavior on the part of bus companies, who increased congestion and endangered passenger safety in their battle to win ridership. (In deregulated areas outside London where ridership is lower and there hasn’t been competition, there have been fare increases and reductions in service, à la Greyhound.)

Most importantly, riders lost out: connections were far from seamless and the system as a whole was less reliable.

One legacy of privatization is that today London has 33 different bus operators, but they are all regulated by TfL. One important thing they insist on (are you listening, Metrolinx? I’m making a point about the Crosstown here) is that the buses have the same livery. To the rider, a London bus is a London bus and it’s all one system.

However, it makes a lot of sense for a metropolitan-level organization, with representation from the municipalities and their transit agencies in the GTHA, to do that. Get the people who need to coordinate with each other around the same table–just as 13 municipalities in the Edmonton metropolitan area recently decided to do. Indeed, it’s what most metropolitan regions in Canada and the US do.

Those who study integration will tell you that it cannot be imposed successfully from on high. Research by Charles Rivasplata, a senior transportation planner with the San Francisco MTA, has shown that “the integration of transit is more easily achieved where operators sense that authorities want to engage in horizontal integration and do not have a hidden agenda.”

As a transit agency, the TTC is a model for the region and could be at the heart of a new group in the GTHA. Instead, get ready for an onslaught of “the TTC is a mess” messaging and how it can’t build or plan or maintain its system, as if the problem is the city and not because it’s the least-subsized transit agency in Canada or the United States (see chart below).

TfL receives 40% of revenue from fares, not 70% like the TTC does. As in most European cities, central government funding comprises a significant portion (23%) of the TfL operations budget (sadly, this has just been eliminated). 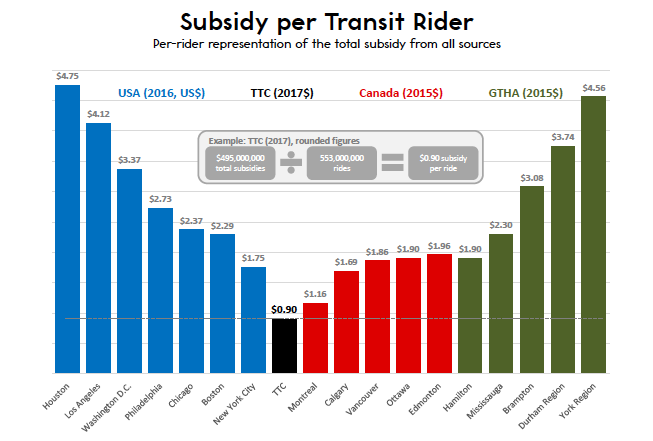 While we’re at it, let’s pretend infrastructure megaprojects haven’t gone over schedule and over budget while under-delivering on benefits on every kind of project, public-built or private-built, in every country, all over the world, for at least the last 50 years. Entire books have been written on megaprojects and risk.

TfL is responsible for the Crossrail project, so clearly metropolitan oversight is not a magic wand for megaprojects. But let’s not pretend, either, that another level of government will do better. There is zero evidence of that, and the list of provincial or Metrolinx’ mismanaged projects is long.

What was at issue with the UK’s LRT and what is at issue in the proposed upload is not who pays; it’s who makes the decision. Thatcher intentionally removed the London region’s ability to act as a region, to make decisions for itself. Metropolitan transit governance is about democracy. Capital can come from the province or the federal government, among other sources; the decision-making should belong to those who live with and are accountable to those who use the system on a day-to-day basis.

It isn’t “regional integration” to disassemble the TTC and expand an overloaded subway line into another city without giving Toronto a say.

The province has adopted the line that the TTC is an important “regional transit service.” The TTC isn’t regional transit; it’s the City of Toronto’s local transit. One might have made a case for the TTC as regional transit as late as the early 1990s under the old Metro system of government, but the province made that megacity bed and now it has to lie in it.

Why does it matter who decides? As Williams says, “Transport is not an end in itself. Rather, it is a key element in creating fairer, greener, healthier and more prosperous cities.” That’s what city governments do, too. Good transit planning creates equal opportunity and access for all citizens. Public transit is about social equity and justice.

After a local referendum on the question in 1998 (72% in favour), in 1999 the UK Parliament passed the Greater London Authority Act as part of a program of, in the words of then-Prime Minister Tony Blair “the decentralisation of power and the granting to our citizens of greater rights to hold government to account.” With the Greater London Authority came the London Assembly, the Mayor of London, and TfL.

Tellingly, the Crossrail project couldn’t get off the ground until the Greater London Authority and TfL came into existence. The national government couldn’t manage it through British Rail, because they were in the midst of privatizing it, and the many boroughs had no way to coordinate and mediate their different interests. To build Crossrail, they created a separate entity, initially co-owned by TfL and the UK Department of Transport, and then transferred full ownership to TfL. Cooperation!

Thatcher’s upload of London transport was a setback for both transit expansion and the maintenance of good service, and it undermined local democracy. It isn’t the path we want to take.

For those of us absorbed by questions of transit planning and governance, it’s interesting to have an opportunity to reimagine the whole system, and figure out the most effective, most productive and most equitable way to do things. These days, there are formal statements circulating and organized events to debate the elements of transportation financing and governance.

The upload proposal is not that conversation. Hopefully, the city’s discussions with the province consider more productive ways forward. Until then, we are merely spinning our wheels within a Thatcherite retake that demonstrates not the slightest interest in equity, justice or good governance.