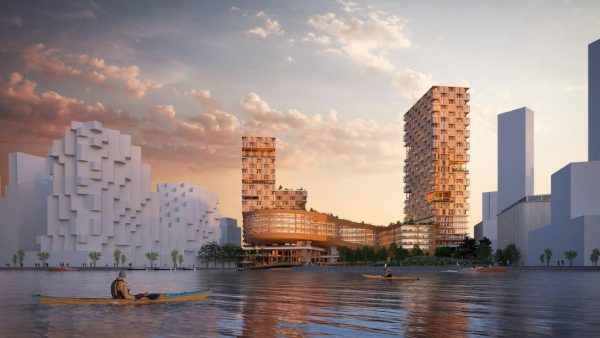 A series of exposés in recent days, in both The Toronto Star and the National Observer, revealed that Sidewalk Labs has retained a small army of lobbyists to sell what looks like a high stakes and very political quid pro quo deal: the Google subsidiary will finance the LRT and other high-tech infrastructure in several precincts in the Port Lands in exchange for a generous cut of future property tax growth, development charges revenue, and the freedom to design a smart neighbourhood and technology test-bed.

This, it would seem, is Sidewalk’s long-anticipated business model. (The company responded to the stories by saying the leaked plans aren’t finalized.) These revelations remind us to pose hard questions about how we got here and where we’re going next, including if we’re going anywhere at all with Sidewalk Labs.

There’s a lingering question from the beginning of this saga that demands an answer. In a January 2018 staff report, the City wrote: “The Framework Agreement between Waterfront Toronto and Sidewalk Labs was not shared with governments prior to the Sidewalk Toronto announcement”. How is it possible that an agreement of this significance wasn’t shared with the three levels of government represented through the Waterfront Toronto board? This is a problematic and possibly instructive fact that has been normalized by the passage of time but shouldn’t be.

How will the MIDP be assessed?

Fast-forward to today and the upcoming Master Innovation and Development Plan (MIDP), the final deliverable of this $50 million USD process. It will be hundreds of pages long, full of details about concepts that have been shared at public meetings. Judging by what’s transpired so far, the plan will likely be a wedge for privatization and governance in a range of areas. The MIDP will likely try to make Sidewalk’s approach palatable through job creation claims, a familiar lobbying tactic to anyone that knows the innovation sector. The tall timber piece plays heavily into this pitch.

In a recent op-ed in Spacing, councillor Joe Cressy, who is Mayor John Tory’s designate on the WT board, wrote: “I vow to see that the public’s interests are thoroughly protected as we review all aspects of the proposal for Quayside. Jane Jacobs used to say that communities have a right to say `no’ to things that are going to harm them, but a responsibility to say `yes’ to things that will help. That’s how I’ll approach the Sidewalk Labs debate.”

In the Star on Saturday, Cressy seemed to up the ante: “We have set out an objective to transform 12 acres of publicly owned real estate into a livable, affordable, sustainable neighbourhood. That needs to be done in a way that is not only appropriate but financed in a way that is in the public interest, not in the most convenient manner possible…We have the absolute right as the city and Waterfront Toronto to say no if we aren’t satisfied with the deal.” (Under the Plan Development Agreement released last July, WT’s board can seek to have any of its three government shareholders approve the MDIP.)

The thing that neither Councillor Cressy nor Mayor Tory talk about, however, is that the plan is not going to be made public immediately upon submission to WT. WT is going to review it with the three levels of government to suggest edits before Sidewalk Labs finalizes it and shares it with the public this summer.

So the fix is essentially in. WT and the governments can correct what they perceive as any major problems with the plan before it goes public, again helping obfuscate what Sidewalk Labs’ is seeking to do, again blending the role of Sidewalk Labs the corporation and Waterfront Toronto the public steward.

Setting that process flag aside, here’s another one: WT says it will use metrics related to categories laid out in the original request for proposals to assess the plan: job creation and economic development; sustainability and climate positive development; housing affordability; new mobility; and urban innovation. But WT officials are grading their own homework. Agency officials and all levels of government have been providing input on the plan all along, how could they now be independent enough to assess it critically?

According to University of Toronto criminologist and urban law expert Mariana Valverde, the development of this plan falls short of the norms and laws used by world-leading smart cities. “In the Toronto case, the tail is wagging the dog in a way that European cities would consider completely illegitimate and dysfunctional.”

In terms of the City’s formal assessment of the plan, the buildings, urban realm and transportation will either be made to conform to existing municipal regulations and master plans and policies or there will be a process to follow regarding exemptions. The City will do that job and do it well. This isn’t the problem.

Rather, the problem is a regulatory vacuum and questions about the RFP. Toronto residents didn’t ask for this financing scheme, nor did they ask for a test-bed neighbourhood. Where in the approvals process will the lack of social license for this project be discussed? The framing of the approvals process skips this fundamental question entirely.

What’s more, the approvals process won’t trigger an assessment of a wide range of potential liabilities that the City is taking on with this test-bed. What’s problematic about Cressy’s pledge to closely review the MIDP is that he (and others in government) talk as though there is already some well-developed regulatory assessment for this type of project. There isn’t.

We don’t have a system of democratic governance for projects where technology is deeply integrated into the physical environment. Toronto doesn’t have democratically informed and up-to-date guidance for municipal digital infrastructure, which might include policies on data governance, digital rights, procurement, hardware (such as sensors), intellectual property, sustainability metrics, and more. And not just as they relate to personal data, but all kinds of different data, data that would be used to assess environmental and resilience initiatives as well as infrastructure.

“Digitization adds a layer to all of our existing relationships, the Quayside project isn’t a regular development contract,” says Sean McDonald, co-founder of Digital Public: “Consider the way land titling evolved to include mineral, water, and air rights as advances in technology and law made them exploitable. What’s the digital equivalent – and how are we making those decisions?” There are no established accountabilities for public and private actors in this context.

Sidewalk Labs and the City may say there is time yet to create policy, but Sidewalk Labs should not be at the table influencing those discussions as they’ve been doing on other fronts already through their lobbying activities with all levels of government. Sidewalk Labs should not be co-authoring Toronto’s digital infrastructure policy. Trading air rights may be standard business in the Manhattan land deals Sidewalk Labs CEO Dan Doctoroff built his career on. But as his domain expands into the digital/smart infrastructure realm, are public authorities going to enable the regulatory capture that the tech sector excels at, where governments let the rules be dictated by the beneficiaries, in this case Sidewalk Labs?

Where do we go now?

Rather than attempt to evaluate a plan against criteria that don’t really exist, we can ask a more political question: should we just shut this project down? Along with a test-bed no one asked for comes an under-discussed moral question for this city and its residents: Does Toronto want to be the enabler population for more Alphabet products to be created and sold to city governments globally? Does Toronto even want to be party to profits from Alphabet products? Though as a recent piece on intellectual property points out, even that proposition may be faulty. To be clear, there is no public plan for this yet, but the prospect of WT sharing in IP development wealth has been discussed and normalized without serious debate.

As the Star’s exposé indicated, it’s only a matter of time before pilot projects are launched outside Quayside. The water will keep getting warmer, and issues will slip past our under-developed regulatory and policy filters. WT still has time to stop this particular project and hit re-set.

What have we learned?

In contrast to its previous planning processes, WT allowed a corporation bidding to build on public land the right to run a public engagement process while providing little transparency regarding business plans and infrastructure, and inadequate opportunities for residents to solicit questions or express concerns. Sidewalk Labs, moreover, has held closed door meeting with unnamed individuals Doctoroff has described as the “academic, business, civic, and cultural leadership of this city.”

The process has been out of step with how progressive cities around the world are approaching tech-enhanced districts. As Anthony Townsend, author of Smart Cities and a leading expert on the topic, has said, “Most cities are exploiting the ability for technology to bring more voices more frequently into planning discussions, especially to weigh the new and complex tradeoffs posed by digitalization. Sidewalk’s efforts in Toronto seem to be heading in the other direction.”

If Sidewalk’s deal does end up going sideways, as the provincial government has threatened, we should learn four key lessons from the botched process we’ve witnessed since October, 2017.

Consult first, then procure: If residents want a living lab or a test-bed, they need to agree to it and set the terms before vendors are involved. Have all the digital infrastructure and digital rights policy in place for a proper regulatory approvals process.

Make small scope procurements: This deal’s omnibus structure should have been cut into several smaller specific pieces, whether for financing or anything else.

Require governments or government agencies run public consultations. Vendors cannot be invited to use them for marketing and public relations.

Make tall timber and other low-carbon features a requirement on the next go. The ideas aren’t proprietary and Waterfront Toronto can get the jobs and industry off the ground if they want to.