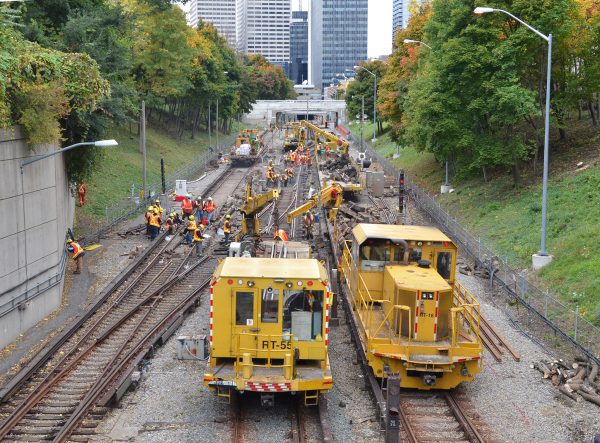 In deference to my forebears, and with a nod to the onset of this spring’s seasonal traditions, I’d like to pose the following question: What makes this staff report different than all other staff reports?

The questions have a kind of Talmudic quality, and, in the aggregate, can also be read as a mordant and unintentionally funny commentary on the tribulations embedded deeply in Toronto’s transit narrative — a tale that is far more about wandering in the (political) wilderness than about reaching the land of milk and honey (i.e., of seamless, efficient service).

3. What level of design was used to develop the cost estimate and schedule for each project?

The original sin. Toronto council and its assortment of enablers at Queen’s Park has been approving transit projects pegged to cost estimates developed far too early in the planning and evaluation process – sometimes at just 5% design, which is scarcely more than back-of-the-envelope bar talk, and often far from the final cost, even when contingencies have been factored in. Consequently, we end up with transit projects that are far more costly than approved, which leads to the vicious circle of political second-guessing and public skepticism and delays.

13. With respect to “transit-oriented development” and seeking private sector investment, what assumptions are being made with respect to compliance with the City’s Official Plan policies and guidelines?

Phrased differently, will the province try to pull rank and force intensification around the proposed subway/Ontario Line stops that will serve low-rise residential neighbourhoods protected by the iron-clad policies embedded in the Official Plan? Much of Toronto’s rapid transit network serves neighbourhoods with low or modest densities. If subway stops land at Queen and Sumach or in Leslieville, for instance, developers will hustle to assemble land on main streets, as they should. But will Queen’s Park also decree that there should be more density in the vicinity of stops, including in the so-called stable neighbourhoods nearby? The enduring and unstated consensus among Toronto pols has been to resist such incursions. The Tories, however, could gut those protections with the stroke of a pen. That’s what the “compliance” language is all about.

20. What is the timeline for going to procurement for each project? At what stage of design will the project be tendered?

Let history be our guide. The Finch LRT, a Metrolinx project that’s been carried out through Infrastructure Ontario’s Alternative Financing and Procurement approach (Triple P-light), moved into the procurement process in 2015, five years after the completion of an environmental assessment (the delays and associated cost escalation, incidentally, have everything to do with Rob Ford’s hatred of LRTs moving through dedicated rights-of-way).

According to Metrolinx, the RFP for the $1.2 billion/11-stop line was issued publicly in February, 2016, with the award granted in May, 2018; major construction is now underway, for a estimated completion date of 2023. Elementary arithmetic would indicate an eight-year delivery on a project that doesn’t involve tunnels. Now please complete this equation: “What does 2027 minus 2019 equal?”

25. How will the Metrolinx “market-driven approach” apply to these projects? Have any private sector partners been engaged on any of these projects to date?

I would say it is axiomatic that Ford and the officials assigned to the subway upload special ops team led by Michael Lindsay had several fortuitous meetings with whichever rolling stock multinational – a.k.a. “private sector partner” — is marketing the light-weight, driverless vehicles that caused the premier’s jaw to drop, and which will run along the Ontario Line. Keep an eagle eye trained on the eventual RFP for that equipment, and let the connecting of the dots begin.

This one, to me, feels like a gotcha question that’s trying to suss out whether the province will up the budget, or force the city to advance more money, in the event of a shortfall. A budget-capped project could lead to value-engineering, such as the sacrificing of stations, whereas a line with a “defined scope of work” presumably means that the configuration is agreed to up front.

32. Are the tunnelled stations mined or cut-and-cover construction?

As the city well knows, the Eglinton Crosstown sub-surface stations have been designed by using a cost-saving technique that involves creating what is a bit like an underground shoe-box, with concrete walls at either end. The boring machines heading along the line bust through those walls, and the construction of the station ensues once the machine has moved on. The process involves opening up the street, but also tunneling. By comparison to the elaborately designed stations along the Spadina extension up to Vaughan, Metrolinx sought to standardize station design in order to contain costs. I’d be shocked if this wheel was going to be re-invented.

42. Given the proximity of the Ontario Science Centre to the flood plain of the Don River, are flood control measures included in the scope or cost estimate?

According to the map with stations released as part of the Ontario budget, the Ontario Line is meant to have stations at both Thorncliffe and Flemingdon Park. So, top marks for those choices, as these are both low-income, high-density communities built around 1960s-vintage high-rises. If you look at a map, however, there’s a rather deep ravine dividing them, and the proposed route just to the south traverses the Don Valley on its way north from the Danforth. So, either this subway goes really deep (i.e., below the flood plain) or surfaces around Cosburn and relies on bridge crossings on its way to the Science Centre. The question answers itself.

49. What assumptions about the Scarborough transit network have been made with respect to Sheppard East Extension, SmartTrack Stations, GO Expansion, Eglinton East LRT to UTSC and to Malvern Centre, etc.?

55. Metrolinx has previously recommended an at-grade LRT for the Eglinton West LRT; what new information has Metrolinx considered that supports a tunneled option?

One has to laugh. Eglinton West essentially bisects the heartland of Ford Nation – Thorncrest, Richview Collegiate’s catchement area, etc. It’s readily accessible to central Etobicoke commuters because Eglinton has a giant legacy off-ramp from the 401 (the original terminus of the Richview stretch of Metro’s expressway network). Once upon a time, Eglinton West was bounded by a very generous (highway-sized) right-of-way that would have allowed an LRT without altering the width of Eglinton. In recent years, however, the city allowed developers to buy and develop along that right of way – proving yet again (as if anyone needed a reminder) that messing with established rights-of-way is a crazy business.

60. What is the status of the confirmed funding for the Sheppard East LRT?

Confirmed? Huh. I’ll defer to the Toronto Star’s Ben Spurr, writing in 2017: “At a news conference at Humber College’s North Etobicoke campus Friday, Finance Minister Bill Morneau confirmed that Ottawa was pulling the Sheppard money and putting it toward the construction of the $1.2-billion Finch West LRT instead.” The Sheppard LRT has been comatose and declared brain dead for years, kept alive only by the occasional non-specific references in city reports. Lost in the desert….