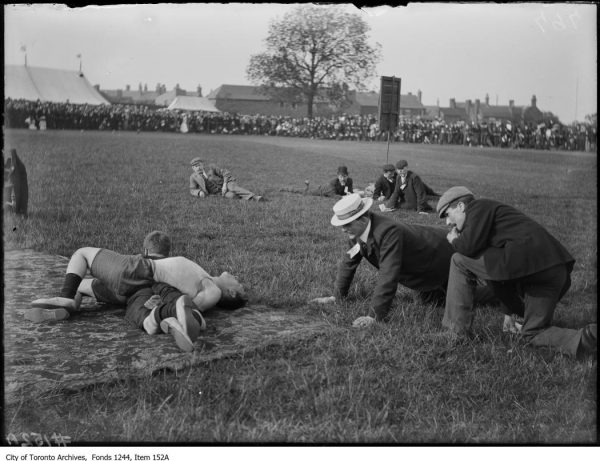 A tweet from the Globe and Mail’s Jeff Gray aptly summarized the noisy feud that broke out last week over the Ford government’s move to cut $1 billion from Toronto Public Health in the next decade: a “Class A Clamshell-Pink Palace bunfight,” Gray wrote. And one, he added, that’s likely to continue for the foreseeable future.

To recap: we had the spectacle of Queen’s Park emissaries darkening the doors of 100 Queen to accuse the city of prevaricating. Meanwhile downtown councilor Joe Cressy, chair of the Board of Health, was turning up  everywhere, fronting our counter-attack.

Although Mayor John Tory seems content to let Cressy carry the heavy end of this political canoe, even he issued statements that sounded genuinely irate. “We have been clear that this is an incredibly serious funding change which puts our city’s health at risk and will put lives at risk here in Toronto and across the province,” Tory said in a statement released last Wednesday.

It’s worth noting that the political response to the looming TPH cuts has been noticeably more raucous than the city’s reaction to the cumulative loss of $1.1 billion in transit capital dollars due to the Ford government’s decision to cut our portion of the Wynne government’s gas tax.

Perhaps the difference in tone has to do with the fact that the health cuts hit individuals whereas the impact of the TTC funding is more diffuse. But if I’m feeling cynical, I’d venture to guess that the more muted response on the transit funding file may have to do with the continuing “negotiations” over the subway upload.

In the main, it would appear that the powers that be on council are now fighting the good fight, at long last. So two cheers for at least turning up.

But what happens when we eventually lose this game of political chicken?

Because we will. (Sorry.)

Even though close observers of the Ford government have noted that the Tories do yield on certain decisions when there’s enough noisy push-back (funding for autism treatment, the sex ed curriculum, sort of, etc.), Toronto politicians who think they can achieve a similar outcome are deluding themselves and their supporters. Beating up on Toronto council has made for good retail politics in the conservative hinterland for years, and that habit won’t change anytime soon.

What’s interesting to ponder is how Tory will manage the fiscal aftermath, given all the heated rhetoric in recent days about the life-and-death consequences of these cuts. Put another way, if Tory is sincere in his assertion that provincially-imposed budget slashing could lead to loss of life, doesn’t it then follow that he’s essentially committing himself to finding ways to replace all those dollars?

In an election year, I suppose, there’s a half-decent chance that federal largesse may come Toronto’s way in one form or another, and with it the promise of an easing of the budget pressures being imposed by Queen’s Park.

Yet if no external sources are found within the next several months, the onus surely is on Tory to either propose property tax hikes or new revenue streams to generate the funds required to ensure that TPH can continue to keep vulnerable people safe. Indeed, after this year’s budget fiasco and the long-predicted slowing of the municipal land transfer tax, Ford’s draconian cuts should be forcing Tory and council to finally pay attention to former city manager Peter Wallace’s advice to diversify the city’s revenues as a basic risk management strategy.

Unfortunately, it already looks as if the mayor and his budget chief will revert to their more instinctively conservative response, which is to further starve the city’s services as a means of absorbing these and other cuts imposed by Ford & Co.

“The reality is there will be some services that will have to be cut if we have to look at this retroactively,” Gary Crawford told CTV News over the weekend. “There is no pocket of money sitting around anywhere for us to be able to make up the difference and if we are forced to make the difference and open up the budget to look for savings that concerns me.”

It has long astonished me that the debate about fiscal sustainability at council is so stunted, and it is now doubly shocking that the response to over $2 billion in lost provincial transfers may be to hack services in order to balance the books.

We seem destined to be governed by politicians who can only see one side of the ledger statement, even when it has become abundantly and almost violently clear that even more austerity as a remedy is the wrong way to go.

The harsh new normal for the City of Toronto is that we will spend the next several years enduring more and more fiscal hits courtesy of the Ford government, which, lest anyone forget, didn’t even get manage to reduce spending this year (i.e., expect more to come). So if Tory & Co. are genuinely concerned about housing and transit and quality of life and, well, life itself, then the mayor surely has a duty to begin a serious conversation with Torontonians about the cost and extent of the municipal services that sustain the 2.7 million people who call this place home.

To do anything less, at this point, would be nothing short of a complete abdication of Tory’s responsibility for ensuring the livability of this city.