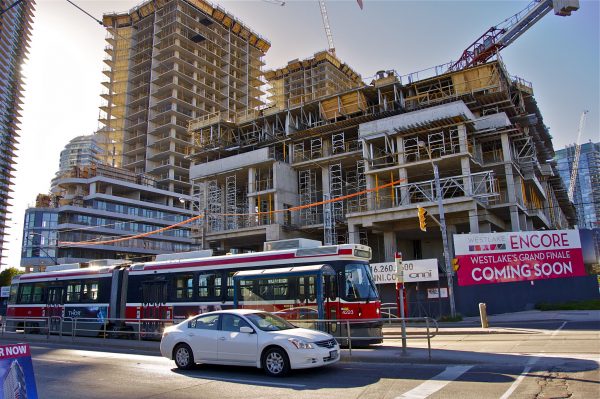 To my eye, the Ford government’s housing “action plan” — which was released late last week in a conspicuously over-stuffed news cycle that also included the subway upload legislation and ministerial bloviating about the sale of air rights over transit stations – is a legislative strategy long on positioning and thin on detail. It foregrounds the rhetoric of the housing crisis and affordability, but the plan itself reads more like an inventory of measures meant to address the development industry’s pain points.

Whether these mainly procedural changes (e.g., reverting to the old Ontario Municipal Board appeals model) will produce more affordability or more of the same remains to be seen.

I want to focus on two of the few specifics in the Tories’ plan: measures to change the rules around secondary suites, and the government’s language about its public land holdings.

One moves the ball forward, the other moves it right back again.

Let’s start with the one-step-forward proposal. The Tories’ plan exempts new homes from paying a development charge for a secondary suite, which represents a step in the right direction, especially in light of Toronto council’s recent decision to ease approvals of such units. (The bylaw lifted the ridiculous prohibition on secondary suites in homes built within the last five years, reduced size minimums and eliminated parking requirements.)

This move, of course, will have more purchase in the 905, which is where the bulk of new home construction lands. But lifting of the development charge requirement creates more financial incentive for both large and small builders to make secondary suites a standard feature instead of an option or a retrofit.

As noted previously in this space, municipal councils across the GTA have had a great deal of difficulty getting their heads around secondary suites as a legitimate source of rental housing stock. They’ve gradually come around. These latest reforms point toward not only a healthy normalization of this kind of housing stock, but a late acknowledgment that the financial demands of homeownership often requires rental income — a fact of urban life that stretches back for generations.

Case in point: Montreal, where many those excellent triplexes (a.k.a. “superposed flats”) in the Plateau and elsewhere in the older city were built over a century ago on a financial model that allowed the owners to live on the main floor and tenants to occupy the upper two.

The point is that regulatory prohibitions on secondary suites (among other de facto restrictions on non-related adults living under one roof) are an artifact of post-war family-oriented suburban planning and need to be purged once and for all (I’m not including airbNb restrictions, which are unquestionably necessary.)

Now let’s look at the two-steps-backwards detail. The Tories’ action plan contains what seems almost like a throw-away line about government-owned real estate:

“We will sell the hundreds of unused properties across the province that the government owns, and wastes millions of taxpayer dollars every year to maintain, to build more homes, long-term care facilities and affordable housing.”

It’s difficult to imagine a more muddle-headed idea. My first thought is that a government eager to please its supporters in the development sector has a huge incentive to sell all that real estate at suspect prices, thereby potentially transferring valuable public assets into private hands. Those with long memories will remember that the Mike Harris government also off-loaded extremely valuable real estate to private developers for a song (Exhibit A: the Minto towers at Yonge and Eglinton).

If the Tories were actually interested in creating more affordable housing, and in particular purpose-built multi-unit residential, they absolutely shouldn’t privatize those lands.

There’s no reason why Queen’s Park couldn’t instead embark on a concerted strategy of inviting multi-unit residential builders, property managers and non-profit housing groups to bid on long-term lease deals designed to promote the development of affordable apartment buildings on those sites.

Such an arrangement allows the government to generate income over the long haul (more on that in a moment). What’s more, by removing upfront (and therefore speculative) land prices from the cost structure of these projects, the province has a choice mechanism for pushing the private sector to build affordable rental, as is the practice in many other big cities where local and regional governments have leveraged their land holdings for precisely the same purpose.

Because the state retains ownership, it can dictate form, tenure and affordability. This approach isn’t just a wooly social democrat notion imported from housing nirvanas like Vienna. We developed the PanAm athletes’ village, in the West Donlands, on a similar model. The same is true for Mayor John Tory’s post-election “Housing Now” strategy, which proposed 10,000 units, including almost 3,700 purpose-built affordable rentals, on 11 parcels of municipal land that won’t be sold off.

The arrangement is a classic triple-win: more affordable housing (with all the associated social benefits), steady financial returns on public lands for the taxpayer, and planning/urban-design-driven (as opposed to speculative) development.

The tragedy is that Ford Nation will forego all those gains in favour of a fire sale for its friends.

Because the City of Toronto has skin in this game – presumably, many of those provincial land holdings sit within the 416 – council should demand (at a minimum) that Queen’s Park make public a list of those properties, its specific plans for those lands and the justifications for the proposed projects.

More than that, however, I want to see council and Tory aggressively push the province to adopt the Housing Now approach instead. That advocacy should demonstrate the financial benefits of this strategy, and also enlist the support of builders, non-profits and those large capital pools looking for steady long-term returns, beginning with Ontario’s giant public sector pensions.

The vast cuts to public health, transit and daycare are, rightly, receiving the bulk of the city’s political attention right now. But the squandered affordable housing opportunity locked up in those surplus land parcels is potentially huge, and shouldn’t be overlooked as council scrambles to defend the city.