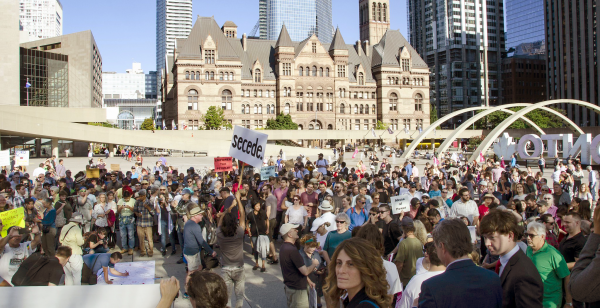 Midtown city councillor Josh Matlow’s packed public meeting this week, convened to whip up support for charter status for Toronto, may have been good politics, but I’m not convinced the notion of charter-as-protective-force field is good policy.

In fact, in the long run, I’m not even sure it’s especially good politics.

Full disclosure: I am a long-standing skeptic about the explicitly separatist or separatist-lite fixes that surface from time to time when Toronto comes under attack from other orders of government. Sometimes, this sentiment has taken the form of calls for the city to become its own province — a maximalist demand that is 99.9% rhetorical flourish.

The dreams of charter status are less fabulist but nonetheless rooted in the persistent and historically grounded idea that the city should be the master of its own destiny. It should! The policy wonks and urban historians dutifully trot out the examples – St. John, Winnipeg, San Francisco, or Hamburg, Germany if you’re looking further afield – to support their argument. But the evidence to show that charters confer some kind of robust protection from heavy-handed interference remains, for me, unpersuasive, especially in the context of all the complex funding and regulatory relationships that bind municipalities to the other orders of government.

Mostly, though, I worry about the politics of distraction, and the grave opportunity costs associated with misdirecting resident anger.

To be fair to Matlow, he’s not been quiet about the Ford government’s accelerating incursion into the affairs of a duly elected municipal council. And I don’t want to revert to whataboutism in questioning promises such as charter status.

But it’s fair to challenge politicians who choose to raise voter expectations about a “solution” that has very little chance of coming to pass, may fall well short of effectiveness, and isn’t even aimed at the right target.

Let’s take them in order.

We all know the constitutional roadblocks from civics class: under sections 91 and 92 of the British North America Act, municipalities, and municipal councils, are creatures of the provinces, and nothing short of a constitutional amendment is going to change that basic fact of Canadian life.

There’s been media and political chatter this week about some kind of work-around in the guise of a bilateral deal between Ontario and Ottawa. The politics seems utterly preposterous. Are we to believe that the federal Liberals — the same gang whose earnest complaint that our first-past-the-post system wasn’t working evaporated ten minutes after they won the 2015 election — will elevate charter status for Toronto into a bargaining chip in their negotiations with Ford Nation?

I think not. Queen’s Park has planted itself in the way of the Liberals’ big infrastructure spending plans. Rhetoric aside, I’m guessing Trudeau & Co. aren’t actually looking for another reason to gum up the inter-governmental affairs file, especially in the run-up to a federal election. And if Andrew Scheer’s Conservatives prevail in the fall, well, never mind.

With respect to effectiveness, it is incumbent on the #EmpowerTO activists to demonstrate evidence of the impact of city charters, and, in particular, progressive, beneficial and inclusive impact.

Analysts have observed that in terms of specific legal powers, city charters aren’t all that different than the City of Toronto Act (2006). A brief digression on this comparison: CoTA was the product of intense negotiations between two popular and mostly progressive governments, enacted during an economic upswing, and conceived, as then mayor David Miller liked to say, with three clear municipal goals in mind: new powers, new funding, more respect. The law envisioned a collaborative working relationship, and also provided city council with the legal power to raise new forms of revenue.

Despite the mind meld between Miller and then premier Dalton McGuinty, the promise of greater political and fiscal autonomy began to fray within three years of the Act’s passage, first with the Liberals’ reneging on Transit City funding and then, after 2010, when Rob Ford led a hard-right swing on a promise to kill one of those new CoTA revenue tools.

The take-away: that politics can always trump structural protections. One need only look at the Legault government’s newly passed secularism law in Quebec to appreciate that political will can trammel seemingly invoilable charter rights.

Last point: do charters work at the scale of the actual city? This is a critique that could be leveled at CoTA as well. It seems to me that one of the shortcomings of charters or home rule status is that the legal protections stop before the urbanized region does, which raises important questions about the structural clout of the central city relative to the outer areas.

To my eye, the relevant scale when we’re talking about the health and well-being of cities is the metropolitan level. Municipal boundaries are administrative and political conveniences and, of course, delineate shifts in urban form. But in a highly integrated region in which municipal borders matter less and less in the way people live, work, move and recreate, there’s something off-key about the idea that one part should be more equal than the rest.

What’s more, the scale constantly changes, expands and becomes ever more inter-connected – an organic feature of city living that’s not really captured by charters that apply to specific geographies.

Just look at our transit conversations, or the complex footprint of the rapidly growing tech industry, a major employment sector which reaches from Waterloo to Mississauga to SouthCore and up to Markham. A charter promises to protect the interests and independence of the city. But which city, and whose interests?

My preference, in the end, is for councillors like Matlow, and activists like John Sewell, to direct their energy, and that of their #empowerTO followers, towards building strong municipal coalitions across the Greater Golden Horseshoe (GGH) region — alliances whose participants can develop a cohesive response to the high-handed way Queen’s Park is enfeebling municipal government, and not just the City of Toronto.

The message, really, should be #empowerGGH. And when it is, Ford Nation will have little choice but to listen up.