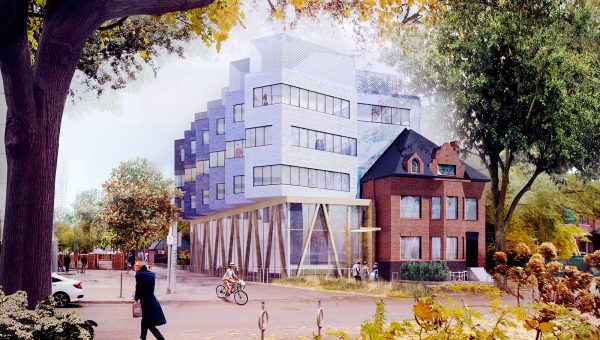 Over the past 20 years, Toronto has grown by over 500,000 people, even as its neighbourhoods have hollowed-out, with the loss of over 200,000 residents. This dynamic has led to the closure of schools and childcare facilities in some areas and over-building in other zones — the downtown core, Yonge and Eglinton, some transit nodes — where high-density development is permitted.

There’s also a clear mismatch between the forms of housing which the market demands and those being supplied. Growing numbers of people are either over-housed or under-housed. Socio-economic polarization has grown, and is transforming low-rise neighbourhoods into exclusive bastions for a minority of wealthy, established, and largely older residents.

To re-invigorate historic neighbourhood populations, the City needs to address the protectionist nature of its urban structure and land use policies as they relate specifically to low-rise residential areas. One solution, which serves as a local extension of the City’s existing urban structure policies, is the use of Density Transition Zones (DTZ).

As a planning policy instrument, DTZs can bridge the gap between areas designated for growth and the surrounding “stable” neighbourhoods. Transition zones would be specifically targeted for “missing middle” housing (triplexes, fourplexes, townhouses, and walk-up apartment buildings). Over time, these areas will evolve organically to include a greater intensity of development, but in a form and at a scale that’s sensitive to existing neighbourhoods. Such development would be concentrated along the edges of neighbourhoods, in proximity to commercial main streets, transit, parks and other amenities. DTZs, in effect, serve as buffer.

With DTZs, we also have the potential to diversify the existing housing stock, thereby providing a greater range of choices to accommodate a greater breadth of lifestyles and lifecycle stages. New missing middle-type developments targeted for DTZs can further optimize existing infrastructure and generate more sustainable revenue to maintain these assets. They bring environmental, social, and economic benefits, and will reverse neighbourhood population decline. As the City grapples with its housing crisis, DTZs should be part of the reform toolkit.

While our existing city-wide land use planning policies do not account for DTZs, their development is not without precedent. Locally, similar forms of development have occurred organically, and evolved incrementally, throughout portions of the former City of Toronto. One prominent example are the lands surrounding the intersection of Yonge Street and Lawrence Avenue, particularly the northeast quadrant. These lands feature a combination of duplexes, triplexes, fourplexes, townhouses and walk-up apartment buildings, which are seamlessly interspersed amongst detached and semi-detached dwellings throughout the first few blocks inside the neighbourhood. They establish a buffer between these major streets and the interior of the neighbourhood. Similar examples can be found adjacent to portions of Eglinton Avenue and Bloor Street, among others.

Lessons can also be learned from previous local planning initiatives, which sought to achieve a greater degree of transition between areas which are targeted for growth, and the neighbourhoods which surround them. Of these, the most notable example was the proposed St. Clair Ave. West Enhancement Zone. It served as a key recommendation of the 2009 St. Clair West Avenue Study, was recommended by city staff, approved by Council, and implemented through a zoning By-law (1103-2009).

St. Clair West’s Enhancement Zones allow for larger building envelopes that can accommodate a mid-rise building while providing sufficient distance and other mitigation features to protect adjacent Neighbourhoods. The enlarged parcel assists in facilitating a continuous rear lane system, thereby alleviating much of the actual or perceived strain on St. Clair W. by allowing deliveries and loading from the rear of a site. In addition, land to be conveyed for a lane widening can be taken from the residential property within the Enhancement Zone instead of the St. Clair property. Over time, this zoning may result in more land being made available for mid-rise buildings while providing distance separation and landscaping as mitigation measures for nearby residential properties. ​
​
The concept of Enhancement Zones extended beyond the St. Clair Avenue Study and subsequent zoning by-law amendments. Similar approaches were developed during the preparation of the Avenues and Mid-Rise Buildings Study, and during the preparation of the Eglinton Connects Planning Study. However, in both cases, the buffering provisions were subject to heavy opposition from residents’ associations and local politicians, and ultimately abandoned.

Moreover, the Enhancement Zone concept fails to establish a true and gradual transition, extending beyond properties that front an Avenue and into the interior of neighbourhoods. This trait is the key distinguishing factor between Enhancement Zones and DTZs. While the former may improve the viability of mid-rise development within shallow sites, and increase the yield of mid-rise developments on deeper sites, only the latter creates opportunities to truly introduce “missing middle” forms of low-rise residential housing and encourage intensification within Neighbourhoods.

We can also learn from other North American municipalities, which have implemented similar approaches through the introduction of new policies and guidelines. Notable examples include Chula Vista, Davis, El Cerrito, in California; Bellevue Tacoma and Seattle in Washington; and Minneapolis Minnesota. Similar ideas are also being considered by several other municipalities, including Austin, Texas, Portland, Oregon, and Vancouver, British Columbia.

In 2017, Urbanarium, a not-for-profit charged with providing a platform for dialogue on urban issues, hosted a design competition centred on addressing Vancouver’s increasing housing affordability issues through the advancement of “the missing middle.” Haeccity Studios Architecture received the competition’s Grand Prize for its “Micro-Op” submission. The company’s concept is to increase housing affordability through the provision of additional units that break from existing models of development and financing while shifting the culture around tenure and ownership.

Specifically, Haeccity proposed introducing new regulations for “Buffer Zones,” which are similar to DTZs. Buffer Zones would occupy the first three blocks between mixed-use commercial corridors and adjacent single-family residential neighbourhoods. Within this area, “missing middle” housing would be targeted. The concept seeks to relax land use regulations and increase density permissions for non-profit and co-operative developments.

These “Micro-Ops” would free households from individual mortgages, pool equity, and shared amenities. Over time, incentivizing community models would shift pro-formas to resist short-term market forces, while increasing quality of life. All new units would have dedicated occupants before construction starts. This would help affordably house future generations, while addressing the land value speculation that has arisen along with densification.

Lessons can also be drawn from local development initiatives. SVN, a planning and architecture firm where I work as director of business development, is testing and implementing the general concept of a DTZ as part of its ongoing work with Impressions Group on the development of a student-focused rental apartment building at 409 Huron Street.

The site, which includes a three-storey detached single-family dwelling, is situated along the northern edge of an established neighbourhood in inner-city Toronto. To the south, properties are characterized by detached single-family dwellings. To the north, the site abuts a high-rise residential apartment, which is adjacent to the Bloor Street West commercial and mixed-use corridor. The property itself is listed on the Province of Ontario’s Heritage Registry.

The concept envisions a four-storey building with 90 student-focused residential units, which retains the existing dwelling and replace 40 existing rental units on-site. Through the strategic use of setbacks, recesses and projections, as well as the use of complementary and compatible building materials and proportions, this contemporary development respects the distinct heritage character of the existing building, as well as the prevailing character of the surrounding neighbourhood.

Through the sculpting of the building mass, the development achieves an appropriate transition in building height, building mass, scale, and density between the adjacent apartment building and mixed-use / commercial corridor to the north, and the adjacent neighbourhood to the south.

Recent events indicate that attitudes towards our land use planning framework may be changing. In June, 2019, Steve Clark, minister of municipal affairs and housing, approved Official Plan Amendment 405 — the Yonge-Eglinton Secondary Plan — with a number of revisions. The general intent of one of these policies, which was captured in the Council-approved version of the policy, but made more explicit by the Province, centers on the general concept of DTZs.

Each zone is situated at the edge of major corridors (i.e. Yonge Street, Eglinton Avenue and Mount Pleasant Road), effectively inserted between mixed use areas, apartment neighbourhoods, and adjacent low-rise neighbourhoods. Many are also situated within a 5-minute walking radius of existing or planned rapid transit stops (i.e. Yonge /Eglinton and Davisville, as well as the Bayview Crosstown station).

Within these zones, OPA 405 states that the stability of Neighbourhoods will be generally maintained. This goal will be accomplished while seeking opportunities for compatible intensification to contribute to a diversity of building and housing types, including semi-detached dwellings, duplexes, triplexes, townhouses, stacked townhouses, and low-rise apartment buildings. For those areas located within a 5-minute walking radius of an existing or planned transit station, the policies state that development will generally transition down in height and scale between the station site and surrounding areas. Such development will be compatible with the character of the neighbourhood, while facilitating an appropriate transition to surrounding areas.

While many of the changes to OPA 405 are controversial, and have received heavy criticism from planners, ward councillors and other city builders, the introduction of a formal area-specific policy on DTZ is a positive step. Now, the City should direct its attention toward implementing similar concepts on the edges of Major Transit Station Areas, Centres and Avenues on a city-wide basis.

Within the broader context of other more dramatic policy interventions — which include the elimination of all Zones which exclusively permit detached single-family dwellings, or the movement away from Zoning regulations which restrict any form of residential use in favour of form-based codes — DTZs have the potential to serve as a more palpable policy solution to the housing crisis. The logic behind the idea is consistent with the intent of the City’s existing urban structure policies, as they relate to the manner by which mid-rise developments along Avenues are intended to establish a desirable and sensitive transition to adjacent neighbourhoods. In fact, DTZs generally reinforce and expand upon the scope of these policies. I would argue that they represent the next logical step forward in an already well-defined, accepted and rationale approach to city building.

The case for DTZ is grounded in an understanding of the core issues and challenges associated with Toronto’s housing crisis. It is derived from discussions with a broad array of stakeholders. It is based on the realization that our municipal land use policy framework is a key contributing factor to the housing problem, but it is also part of the solution. It is built on the understanding of the cumulative impacts presented by an increasing population, shrinking households, and a lack of housing diversity. Its urgency is compounded by an appreciation that Toronto’s growth areas are intensifying beyond their carrying capacity, whiles its neighbourhoods are declining. It is designed to address the simplicity of the inherent problem, while acknowledging and responding to the complexity of political challenges. DTZs will not be the solution to the housing crisis, but should form part of a broader approach, which will require strong, coordinated, thoughtful and timely leadership.

Blair Scorgie is a registered professional planner and urban designer. He serves as the Director of Business Development at SvN Architects + Planners Inc., and as a lecturer at Ryerson University’s School of Urban and Regional Planning. Blair is a contributing author to House Divided: How the Missing Middle will Solve Toronto’s Affordability Crisis, and co-founder of www.transitionzones.com. Follow him on twitter at @blairscorgie.