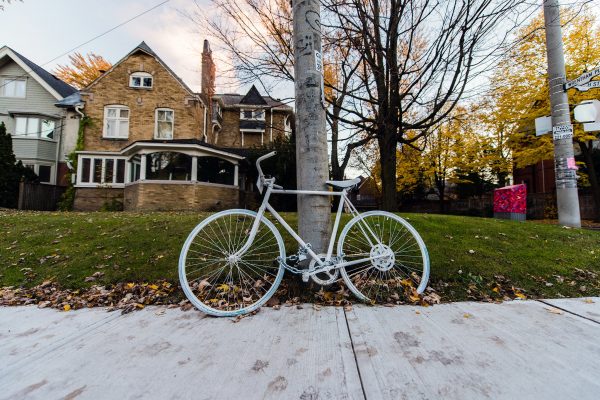 On August 30, Celeste Jones became the 28th person to be killed on Toronto’s streets after she was struck by a hit-and-run driver while crossing a suburban arterial to reach the bus stop, highlighting yet again that both walking to the TTC and crossing arterial streets are all too often deadly tasks for people walking in Toronto. In the ensuing weeks, two more pedestrians were struck and killed in Toronto. While it is possible that 2019 will not surpass 2018’s 10-year high of cyclist and pedestrian deaths, it is clear that this year will not represent a major departure from stubbornly high rates of deaths and serious injuries on Toronto’s roads.

New York City, with one of the continent’s most ambitious and well-funded Vision Zero programs, saw road deaths drop steadily until 2019 and was justifiably heralded as a Vision Zero success story. Unfortunately, Pedestrian deaths in New York City were up by nearly 33% in the first four months of 2019 and cyclist deaths are on track to more than double this year. Even Portland, Oregon — home to some of the most ambitious and progressive cycling and pedestrian planning on the continent — has seen a major spike in pedestrian and cyclist deaths in 2019 despite adopting a Vision Zero Plan in 2016.

Considering the widespread adoption of plans intended to reduce and eventually eliminate deaths and serious injuries on city streets, why exactly is the exact opposite outcome occurring in most cities that have implemented Vision Zero Plan?

I would argue that this trend is at least partly due to a misinterpretation of how the principles of Vision Zero should be applied, which has failed to result in the necessary systemic changes to street design that the concept demands.

The broad principles of Vision Zero are unquestionably laudable: advocating for designing roads to account for the errors of their users and adopting a holistic approach to road safety involving all relevant stakeholders. Vision Zero in Sweden is a central government initiative intended to bring about systemic change to road design by shifting the culture of traffic engineering and planning to a framework that prioritizes the safety of all road users above all else.

Vision Zero proposes that the people who design and build roads bear responsibility for the serious injuries and collisions that occur on them, although it still entails some measure of enforcement and education. Vision Zero does not seek to eliminate collisions entirely, but rather to ensure that what collisions do occur are not deadly. Vision Zero in Sweden, and the somewhat more prescriptive approach of Sustainable Safety in The Netherlands, have proven to be remarkably successful as guiding philosophies at a national scale in efforts to reduce deaths and serious injuries in both countries.

However, both countries have seen the number of road fatalities remain stable for the past decade after significant reductions in the 2000s.

By contrast, the North American translation of Vision Zero has manifested itself in the form of road safety plans at the municipal scale with the stated goal of eliminating road deaths and serious injuries within a time-frame that is often hopelessly optimistic. While Vision Zero plans do recognize the need for a systemic approach to road safety, the actions they propose often attempt to shape cyclists, pedestrians, and drivers into safe users of streetscapes that are inherently unsafe by the very nature of their physical design. This is an impossible task and highlights that Vision Zero has yet to be effectively translated into a North American policy environment.

Vision Zero’s Swedish origins are almost invariably invoked in what can be described as an appeal to a sense of deference to Nordic and Low Country urbanism. This is not to suggest that these countries don’t possess an abundance of examples of sustainable mobility and urbanism that warrant emulating, rather that is it crucially important to undertake the complex and expensive business of translating their legislative context, funding structure, and planning and engineering cultures to a North American context. Road safety plans are not necessarily an unwelcome development in a North American context, but we should be clear on what they can realistically achieve with a limited scope and scant resources in the context of a continuing reluctance to shift the road design paradigm towards prioritizing safety for all users.

This attempt to make safe road users of unsafe designs manifests itself in measures like Toronto’s Vision Zero 2.0’s heavy emphasis on lowering speed limits across much of the city. Reducing speed limits is not an unwelcome step, but simply changing signs does little to reduce driving speeds without design measures that force drivers to travel as a safe speed. Vision Zero 2.0 recognizes the necessity of design changes in order to reduce violence on our roads, but then provides little in the way of details to implement them.

This approach to Vision Zero does little to encourage or facilitate cycling or walking, instead treating them as activities to be managed into safety. This allows for actions that actually make walking and cycling more difficult in the name of promoting safety, and ignores the fact that active transportation becomes safer as more people do it. This is exemplified by the reaction of Councillor Jim Karygiannis to pedestrian deaths in his ward. Following the death of 11-year old Duncan Xu in February 2018, Karygiannis closed the walkway that the young boy used before he was struck and killed. Similarly, Karygiannis recently asked the TTC to remove the bus stop that Celeste Jones was attempting to reach when she was killed. Of course, safety is a vital aspect when it comes to encouraging active transportation, but the Dutch and Swedish examples suggest that it might be more effective to simply integrate Vision Zero principles into planning for street designs that are designed to get more people to walk and bike.

Vision Zero plans will likely continue to deliver lackluster results across North America until they take the necessary shift towards prioritizing safety through design measures. They do represent a tentative shift towards safer streets, particularly in terms of the way we think about road violence and have unquestionably led to some worthwhile individual projects. Vision Zero plans signal that road safety is becoming a priority for municipal governments, but we should be clear that simply proposing a goal of zero road deaths or serious injuries is unlikely to bring about meaningful change without a thorough rethinking of the way we design and build our streets.