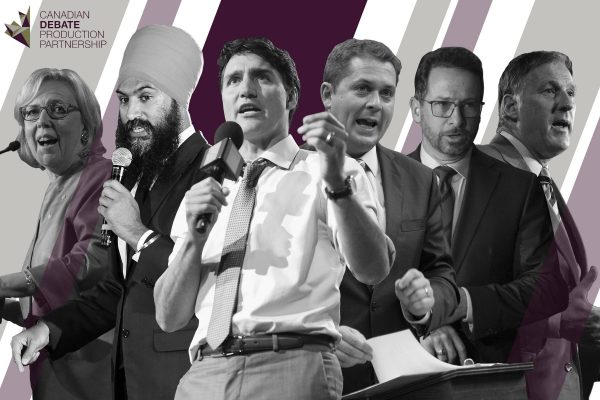 If one applied the blink test to last night’s leaders’ debate, it would be fair to say that the most audible message to waft out of the dreary two-hour contest was that Canada needs to address climate change…somehow.

After accounting for the predictable cheap shots and the benighted attempts by the leaders to address themselves to ordinary Canadians, with their ordinary pocket-book problems (“affordability!”), there’s no question the debate featured a decent amount of talk about pipelines, carbon plans and the parties’ emission reduction goals. That was the only bright spot.

The bad news is that the debate contained essentially no content about cities, and this despite the fact that about 80% of Canadians live in urban areas of varying scales and six in ten of us inhabit just a handful of large city-regions.

Despite this bedrock demographic reality of Canada circa 2019, I counted only a single (audible) mention of the word “transit” – from Andrew Scheer, in reference to his bid to resurrect the Harper-era transit pass tax credit – and scant discussion about other urban issues: infrastructure, daycare, gun crime, and affordable housing.

The strangeness of this omission certainly bears unpacking.

Notwithstanding the Constitution’s delegation of all things municipal to the provinces, Ottawa has a long and substantial involvement in Canada’s urban affairs: the housing construction schemes of the post-war era; the 1960s/1970s urban renewal policies that produced places like Harbourfront and hundreds of thousands of subsidized co-op housing projects; critical shifts in immigration policy in the 1970s and 1980s that created the world’s most diverse cities; infrastructure re-investment programs (1990s-2000s); federal contributions to cultural institutions (2000s); and the New Deal for Cities, which institutionalized of the federal gas tax transfer to municipalities (mid-2000 to early 2010s).

These changes didn’t come from just to one team – all three federal parties had a hand in solidifying the ties between Ottawa and Canada’s urban communities. And, by and large, Ottawa’s policy incursions have been successful. We have some of the world’s most livable cities for a reason. It didn’t just happen.

In fairness, Justin Trudeau’s Liberals in office haven’t been obtuse to the needs of Canada’s cities. The Liberals won in 2015 in part by promising to substantially boost spending on infrastructure and admit tens of thousands of Syrian refugees, the vast majority of whom settled in big cities. The ambitious national housing strategy, coaxed into existence by Toronto MP Adam Vaughan, reversed the long federal retreat from affordable housing that began under Brian Mulroney.

Yet you’d never know any of this from listening to the leaders argue about the country’s future last night. And this omission strikes me as a massive and perplexing blind spot, particularly in light of the high level debate over the climate.

As Elizabeth May correctly noted, the current price escalator on the contentious carbon tax won’t bring Canada anywhere close to meeting the 2050 emission reduction targets set out in the Paris accords. Much more needs to happen.

So, yes to a national electricity grid combined with a push to end coal fired generation, etc. Butwhat about buildings? As is well known, buildings represent about 40% of all emissions, both in terms of their operational needs and the energy embedded in construction materials, especially concrete and steel. What’s more, the vast majority of buildings that will exist by the end of the century don’t exist yet.

There’s a huge opportunity to de-carbonize Canada’s built form, and the lion’s share of the shift towards net-zero or even net-positive design and development will – or should — take place in a handful of large metropolitan areas. Yet apart from a few morsels about loans for home energy retrofits, the leaders had nothing much to offer on the subject, and this despite the fact that northern European countries are actively pushing low or no-emissions buildings as a core element of national carbon reductions schemes.

And what about tethering together critical national goals, such as affordable housing and emissions reductions? Measures aimed at helping middle class families buy homes achieves nothing on this front, and could arguably accelerate, not inhibit, sprawl. But the feds could work with the provinces to ante up thousands of hectares of surplus public land located in urban areas for affordable rental housing, and then incentivize developers to invest the savings on real estate costs into green design. The benefits: less sprawl, more affordable rental housing, and buildings that cost less to maintain and operate over the long haul. Yet they weren’t talking about that, either.

Finally, transit. Yes, there is transit language in the Liberal, NDP and Green platforms. But it’s surreal that the leaders didn’t make much of a case for using federal transit funding as a tool to combat not just sprawl, congestion and emissions, but also as a means of improving life for households that have no choice but to operate vehicles and fight gridlock because driving is the only way to get around.

Just look at the GO network in the GTA: Metrolinx can’t expand it fast enough because commuter demand is so great. More investment in expansion seems like a no brainer that ticks off multiple boxes. But did anyone talk about the potential of such investments? Not that I heard.

There are still two weeks left in the election. I suppose it’s possible the parties will develop a keener sense of how to talk about the intimate relationship between place and policy by October 21. However, based on last night’s performance, I’m not optimistic. Canada may have ducked the worst of the populism virus that has infected so many other countries. Yet for reasons that surpass understanding, we seem to have slipped into an era of post-urban politics.