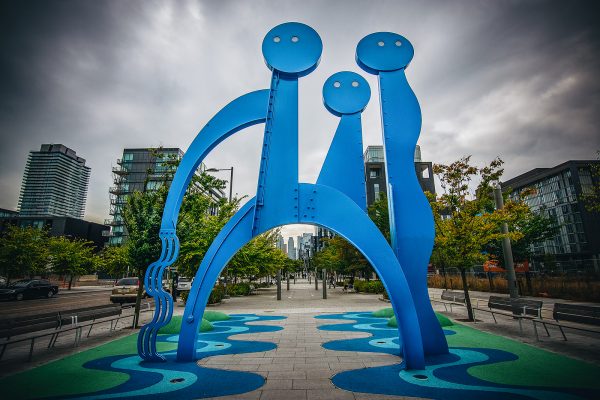 Last week, Mayor John Tory dropped by OCAD to declare that 2021 would be the year of public art in Toronto. This announcement sets up the release, later this year, of the City’s ten-year public art strategy.

This past July, the City of Toronto’s Economic Development and Cultural Division held a community conversation about what the new ten-year public art strategy should look like. The impetus for this strategy was spurred by “Redefining Public Art in Toronto”—a momentous research project led by OCAD president Sara Diamond. In their findings, Diamond and her team highlighted—among other things—the inequitable distribution of public art in Toronto, and advocated for initiatives like the implementation of a public art master plan.

The consultation was led and organized by PROCESS, an organization that seeks to facilitate community engagement in areas like public art, urban planning and policy development. The City of Toronto hired PROCESS to lead discussion groups with various public art experts. They also held community events around the city to give the public an opportunity to articulate what they would like to see change in Toronto’s public art landscape.

PROCESS ran eight focus groups consisting of artists (including, importantly, street artists and Indigenous artists), curators, communicators, critics, landscape architects, developers and consultants. During these sessions, three key questions were posed to the groups: First, why is public art important? Second, what are peoples’ current experiences of public art? And finally, what should public art consist of in the future? PROCESS’ final report on the findings from these consultations was made public this fall.

Speakers at the July meeting ran by PROCESS included Mohamood Popal, Camille Georgeson-Usher, Hiba Abdallah and Workshop Architecture director Helena Grdadolnik. Panelists spoke about their art projects as a way to illustrate alternative ways of both creating and commissioning public art. Artists outlined experiences of unrestrictive work environments in which they were granted funding that allowed them to explore diverse public art avenues and engage in community involvement. This approach stands in stark contrast to the constrained artistic freedoms often imposed on those working to create public art. In cases like these, space, resources, time and money are extremely limited.

The City’s new focus for its public art strategy includes the creation of an environment that is conducive to public art. This goal may involve engaging artists and communities earlier in the commissioning process (instead of plopping down a piece of public art at the very end of a condo’s construction) and implementing flexible city processes for the creation of public artworks. Other recommendations included a more equitable distribution of public art in a diversity of mediums, the promotion of Indigenous reconciliation and place-keeping, and the implementation of barrier-free commissioning processes for artists. How the City will achieve these goals is still unclear, although the looming release of the ten-year public art strategy may fill out the picture.

In PROCESSES’s final report, a new definition of public art was formulated: based on feedback from consultations and meetings, public art was newly defined as “any media that has been produced by an artist for publicly-accessible space.” Furthermore, according to the summary, “many participants identified the need for the City to articulate a clear vision and objective to ensure a holistic approach to public art.” Participants said they wanted to see more art that spoke to urgent crises in the city, “such as housing affordability and climate change.” A further recommendation was for public art “to be connected to place, and help connect residents to the places they are in.”

These are all great recommendations. The City is starving for more artworks in diverse mediums that contribute to place-making and reconciliation. However, there have to be tangible ways to implement initiatives like, for example, less restrictive commissioning practices. This demand is especially applicable to the Percent for Public Art Program, where it often happens that only a few well-established artists are invited to submit proposals for public artworks. In cases like these, there needs to be a reevaluation of what this art is doing and who it is for.

I want to see public art in Toronto that is unapologetically present. Rather than restricted to the confines of a condo entryway, I want art that disrupts our usual orientation of the public versus private sphere. Is public space static and unmoving, like a playground or walking trail? Or is it fluid and dynamic, emerging from activity and dialogue? Both the ten-year public art strategy and the Year of Public Art will have a tremendous impact on how we relate to public space in this city. Now is a potential turning point for public art in Toronto. Let’s act on it.