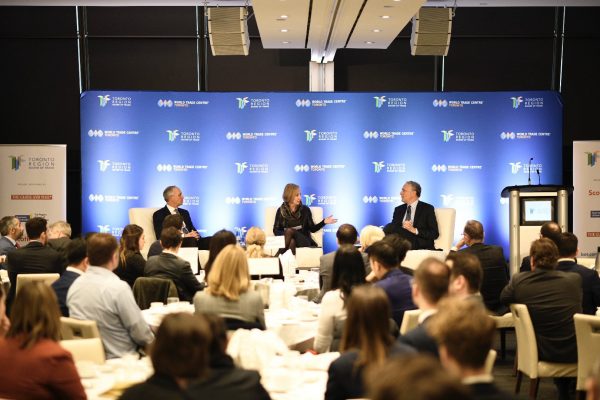 It was a mostly content-free PR exercise in demonstrating that (a) Quayside is still a going concern; (b) the counterparties aren’t feuding, at least not publicly; and (c) there’s (eventually) going to be scads of money to made on that oddly shaped 12-acre brownfield site which has become ground zero in a messy global argument over the future of smart city tech.

Diamond laid out a timeline: technical evaluations ongoing; WT public consultations later this spring (plus a board decision on whether or not to continue negotiating by end of March); City of Toronto public consultations and, eventually, a council debate, unfurling over the spring and summer; and a final plan for WT’s board to sign, or not, by late 2020. Come back next January, he told the lunch-time business audience, and there may be a “signed document.”

Over that interval, both said, the federal and provincial governments, as well as the City, need to create a regulatory framework that allows Sidewalk to build out its vision but also addresses public concerns about privacy and surveillance. The anticipated reforms cover everything from amending the provincial building code so it allows tall timber buildings to updating legislation governing data privacy and planning approvals processes for new smart city technologies.

I asked both if they felt the three orders would make these changes within the one-year time line Diamond laid out. Doctoroff said he wasn’t too concerned. “We’ve always said we could live with whatever data regime the government’s put in place, so I don’t think that’s going to be a big issue.” He stated that for Sidewalk, the most pressing regulatory issue involved rules for tall timber construction.

Diamond seemed more cautious: “If we don’t have all our regulatory ducks in order, I don’t know whether Waterfront [Toronto] is going to want to sign an agreement with Sidewalk Labs. So, I think, I think that’s something that’s hanging over both of our heads.” He urged the audience to press their elected representatives to remain focused on making the necessary changes.

But away from all this GR, much of the work Sidewalk and WT are doing right now involves a great deal of horse-trading focused on the list of 166 technologies proposed in Sidewalk’s Digital Innovation Appendix (DIA) — a 483-page compendium of the systems and devices that together constitute the “platform” at the heart of the company’s master innovation and development plan (MIDP).

This list, Diamond said, “is being reviewed by Sidewalk and WT to see what could be achieved realistically.” As Doctoroff added, some of the envisioned technologies in the DIA – for example, those involving autonomous vehicles – will have to be set aside because Quayside isn’t big enough to accommodate them. Diamond said WT will eventually release a list of those that have been redlined.

WT’s advisors have been hacking their way through this giant appendix over the past several months. It is painstaking work, and offers a glimpse of just how difficult “governance” will be when it comes to assessing this terrifically complicated proposal. Needless to add, the technical nuances represent a formidable obstacle to meaningful public engagement, even though the impact of the technologies themselves could have a profound impact on the public character of this precinct.

Just consider one item in that appendix – a new type of fibre optic technology, known as “Super passive optical network” (or Super PON) that Google has developed for other metropolitan markets and proposes to install in Quayside.

I decided to unpack this “innovation” to illustrate the layers of complexity in this massive evaluation exercise. It’s worth noting, first, that Super PON isn’t even one of the hot-button technologies that has attracted all the static. It doesn’t gather data in public space, nor does it generate analytical inferences –e.g., what we consume based on patterns of energy consumption in an individual apartment.

Rather, Super PON is simply Google’s next-gen broadband technology that, Sidewalk says, allows more subscribers, located over a larger geographic area, to access the signals travelling through the fibre optic cables running in shallow trenches beneath city streets. Google, in fact, deployed Super PON in its troubled Internet service provider (ISP), known as Google Fibre, which offers subscription packages to homeowners and businesses in a handful of U.S. cities.

In its technical appendix the MIDP, Sidewalk describes Super PON as “an emerging standard” that represents one of four pillars of the area’s “digital infrastructure.” Sidewalk says it isn’t proposing to set up its own ISP on the waterfront, but would like to see Super PON installed, perhaps by Beanfield, the firm which operates the high-speed network that connects WT’s East Bayfront projects. As Sidewalk’s documents note, Super PON and the other elements of its digital infrastructure “support and enable the more visible innovations” in the MIDP.

In minutes released for its November session, DSAP questioned the choice of technology, the benefits to residents and Sidewalk’s claims about using an emerging innovation as a means of “future proofing” the development (i.e., not investing in a soon-to-be-obsolete system). “This element of the proposal seems irrelevant to the overall plan,” one DSAP member opined. Sidewalk, in its responses, defended the technical promise of Super PON but conceded it “was not strictly a necessity.”

DSAP member Andrew Clement, a professor emeritus and information technology expert at the University of Toronto, told me that its seems Sidewalk’s decision to go with Super PON primarily benefits Google/Sidewalk, which developed the technology and would license the IP. The main feature, he said, is that it allows ISPs to significantly extend their reach, i.e., offering subscriber service over a 50 km radius with fibre optic cables that previously only worked across a 20 km range. “That covers all of the area of Metropolitan Toronto,” Clement said. He also questioned the wisdom of going with a system that has yet to be approved by industry standards-setting bodies.

How to interpret all this? Is Sidewalk’s proposed deployment of Super PON merely a foot in the door tactic that potentially allows Google to build a new city-wide service for this kind of high-speed internet? Or does its proposed deployment satisfy WT’s goal of using Quayside as a spur for innovation?

In fact, is there even a public policy case for objecting to a private developer’s technology procurement choices for the wiring of its projects? Consider this analogy: if a condo builder opts to go with a novel type of energy efficient window system that satisfied basic code requirements as a means of giving an innovative supplier a boost, should planning department officials have the right to object?

If we lift our gaze from this one example, the broader point is that the logic of the MIDP — plus the intense and justified focus on Sidewalk’s claims about using tech to build a better city – has created the need for an entirely new form of regulatory oversight, one that looks intently at each of the proposed technologies but then situates them in an integrated commercial and public interest context.

As this one case reveals, it’s going to be heavy sledding, with an uncertain destination. After all, WT officials now need to figure out how to engage Torontonians in a conversation about the MIDP’s elements that will be far more obscure and granular than any of the debates that have occurred so far in this fraught process.

We demanded digital governance. This is what it’s going to look like.