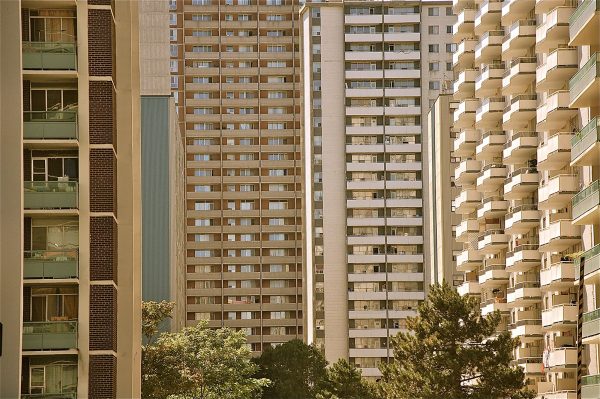 It’s the first of the month, which means, for many Toronto tenants, that rent’s due – a perennial transaction that was already imbued with stress, and which now includes all manner of pandemic fall-out tales.

I’m guessing (without evidence) that most tenants have, or had, the April 1 rent payment worked out. But for those who’ve lost jobs or are seeing business/self-employment income severely impaired by the economic fall-out of the COVID19 restrictions, May 1 begins to loom large, and menacingly in the middle-distance. A clock ticking down, and who knows what happens if that next cheque bounces.

To ballpark the scale of the economic impact of all those monthly rent cheques, consider the following back-of-the-napkin calculation. According to a 2019 City of Toronto housing indicator study, there are approximately 700,000 rented dwellings in the 416, the vast majority of which are in apartment buildings (the figure includes rented condo units).

Estimates for average and median rents vary widely, but Canada Mortgage and Housing Corp. reports that one- and two-bedroom units (the most common apartment sizes) typically cost $1,361 and $1,563 per month. Private agencies, like Rental.ca, place the medians much higher, at $2,240 and $2,910, respectively.

If we peg the average rate at $1,500 to $2,000 (probably low), the math suggests that about $1 billion to $1.4 billion is changing hands in this city today, moving from those thousands of people who mostly don’t own real estate to a far smaller number of people and firms that do.

It’s impossible to guess what proportion of that wealth transfer is potentially impaired by the pandemic fall-out, but suffice it to say the number is not trivial. Early estimates of unemployment insurance applications are huge – a million people nationally, and tens of thousands live here.

While the province has passed legislation to temporarily halt evictions and the federal government has unveiled wage subsidies and emergency relief benefits worth up to $2,000 per month for four months, many questions continue to hang heavily around those rent payments: What happens to tenants whose rents are so high that they soak up most of those emergency benefits? What transpires if the government can’t process all those emergency benefits applications or wage subsidy requests by May 1? And what happens if unscrupulous landlords try to force out vulnerable tenants, reckoning that they may not have the information or resources to resist?

Lots of extremely difficult questions and not a lot of answers.

It’s absolutely the case that many tenants deal with perfectly reasonable and even humane landlords, among them new homesowners who are renting out their basement to help cover the mortgage or someone who’s staked their savings on a condo to generate some rental income.

There are some reports of larger property management firms that have said they’ll assist financially stressed tenants in working out some kind of deferred payment plan. “If it takes 12 months [to pay back], it takes 12 months,” Park Property Management Group senior vice-president Margaret Herd told The Globe and Mail.

But the municipality’s official stance has been that it can only encourage landlords to do the right thing, but no more.

“A number of companies have detailed policies in place to assist tenants whose income has been diminished by the health crisis, but far too many have not communicated anything to reassure anxious tenants who in the ordinary course have rent payments due on April 1,” the City said in a statement posted on the Toronto Community Housing website. “While the City has no power to direct landlords, the mayor strongly urges all property owners to find ways to help tenants who need it to stay in their homes during these unprecedented times.”

Is it really the case that the City’s got nothing more in its arsenal than a mostly gentle scolding from Mayor John Tory?

I’d argue that the City actually has more leverage over recalcitrant or predatory landlords than it is acknowledging. In late 2016, council approved a registration, inspection and audit system for apartment property management firms. The new regulation was responding to mounting concerns about apartment upkeep and calls for additional disclosure about sub-standard buildings. Landlords must now register with the city and are subject to inspections and audits. Owners that don’t comply face fines and even restrictions on renting units if property standards orders aren’t met. (The full rental housing standards rules are here.)

As a long-standing operational practice, the City has exercised discretion with its property standards bylaws, reasoning, for example, that shutting down a non-compliant rooming house – and therefore leaving very low-income tenants without a place to live – may be worse than turning a blind eye.

Given the current environment, the City could opt to send a clear signal to property management firms that refuse to offer rent flexibility to tenants hit by the pandemic: expect especially probing inspections in the foreseeable future.

Yes, it’s a cold-hearted pressure tactic. But the City needs to use all the tools at its disposal today in order to get in front of the killer rent crunch that’s coming a month from now. To my eye, Toronto’s relatively new apartment licensing system seems like a cudgel that’s unexpectedly well suited for the extremity of this moment.