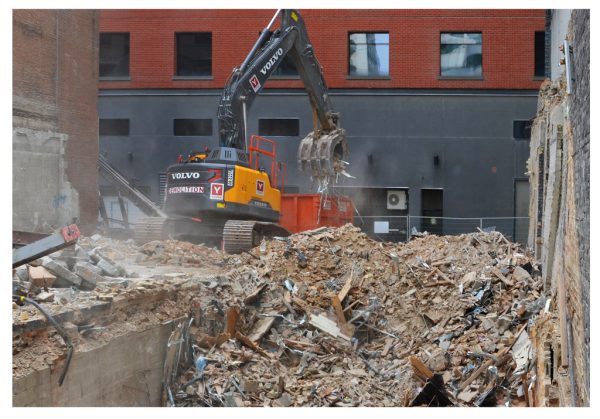 If you’d tuned in to the Ontario government’s daily press briefing last Friday, you would have seen a grim-faced Doug Ford presenting the sobering projections of the pandemic’s potential impact, based on three scenarios: the do-nothing estimates, which would have yielded massive infection rates (300,000 cases); a second scenario looking at current containment measures (80,000); and a third, incorporating stepped up public health measures, that could limit infections to 12,500, with (just) 200 fatalities by the end of this month.

“My government is prepared to take every step possible,” Ford said solemnly as he outlined tougher policies, including new sector closures. “I know businesses are struggling to stay afloat through this rough water, but lives are on the line.”

The media coverage echoed the press release and the premier’s statements. As Canadian Press reported, “The new business closures, which take effect on Saturday [April 4] at 11:59 p.m. and will be in effect for at least 14 days, include all industrial construction sites except for those on projects considered critical.”

The province’s senior public health official gave his thumbs up, CP added. “Dr. Peter Donnelly, president of Public Health Ontario, said the numbers clearly illustrate the gravity of the situation. ‘If we do everything that we can think of — everything that already has been done stays in place, all of the other measures that are being considered put in place — then I think we could reduce the death toll in Ontario to somewhere between 3,000 and 15,000.’”

So one could ask, five days later, why there’s scant evidence that the construction sector has had to down tools, as have so many other industries and professions. The question has been pinging around my head for days as I endlessly walk the dog around the city, past numerous busy condo and stand-alone residential construction sites, none of which could be described as “near completion.”

The actual wording of the enabling regulation — the link to which does not appear in last week’s dramatic press release — reveals the width of the gap between the premier’s rhetoric and his government’s actions. It’s worth quoting in full.

In Schedule 2, which enumerates the ostensibly narrower list of essential businesses, we find the construction provisions. As Ford indicated, healthcare, transit, energy and court projects are all deemed essential, as are undertakings relating to industries like petrochemicals and the production of personal protective equipment. (The construction of health care facilities meant to house COVID19 patients will be allowed to operate around the clock, Queen’s Park announced yesterday.)

Then we get to those residential projects deemed essential. They include:

(i) a footing permit has been granted for single family, semi-detached and townhomes;

(ii) an above grade structural permit has been granted for condominiums, mixed use and other buildings, or

(iii) the project involves renovations to residential properties and construction work was started before April 4, 2020.”

Here’s the translation: In the City of Toronto, single family, semi-detached and townhouses tend not to require “footing” permits, which are typically issued to allow foundations to be dug and constructed. For these kinds of projects, the City mainly issues building permits. If a contractor has one and is even just beginning excavation, they’ve got a green light to continue until the dwelling is complete.

For mixed-use condos, the “above grade structural permit” is issued after the foundation has been completed, which can take up to a year. So if a project is even just poking its head above ground level, with just one or two floors done, the developer has a green light and can theoretically continue until the tower is finished.

What’s notable is that the reg’ does not contain the phrase “near completion.” Rather, it effectively grandfathers almost anything that’s underway, which means those sites will be populated by trades people, including those who have to ride up crowded lifts to get to higher floors, as well as the construction managers working in those cramped site offices fashioned from trailers or shipping containers.

None of this should come as a huge surprise. Ford Nation is tight with the development industry, whose lobbyists were evidently working the phones last week. As The Globe and Mail reported, “One construction industry executive who has been given advance notice about the government’s plans said all private-sector industrial, commercial and institutional construction work will be halted, but the plan is to exempt public-sector projects as well as some residential construction.”

I totally get why genuinely essential infrastructure projects should go ahead, albeit with close supervision in terms of workplace safety and distancing practices.

What’s anything but clear, however, is why business-as-usual should also apply to residential projects: luxury condos, or the sprawling design-build McMansion sites that populate the nether reaches of areas like Forest Hill. It’s also worth noting that the projects likely to be halted by this edict are the new affordable Housing Now developments that the City has pushed so hard to get to the starting line in the past five or six months.

I’ve been generally of the view that the Ford government has acquitted itself quite well through the pandemic, with the premier and health minister Christine Elliott seemingly prepared to defer to the government’s experts. His concern doesn’t strike me as an act. What’s more, I’d be willing to place a big bet that Ford himself has plenty of dedicated fans among the trades people who toil away behind all those hoardings.

Which begs the question: why is his government prepared to throw these guys in the path of a deadly pandemic when there are now so many ways for affected industries and individuals to ride out this storm and resume operations on the other side?

“Lives,” as Ford himself said just last week, “are on the line.” Including those of residential construction workers (and their families), who increasingly seem to be more expendable than essential.