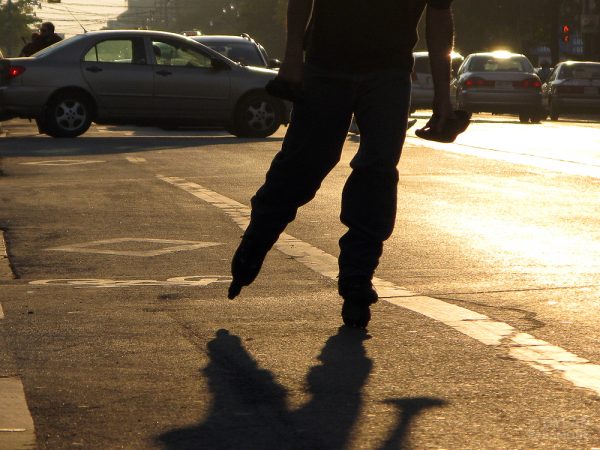 When we think of active transportation, we typically refer to the traditional modes of walking and cycling. But is it time we direct attention to less-considered forms of human-powered travel?

Skateboarding, rollerblading, and non-motorized scooters are becoming increasingly popular in urban areas, and their presence deserves consideration when designing our streets. For short trips, they can be effective and sustainable methods of getting around in the city and viable tools for overcoming traffic congestion.

With that in mind, it may seem surprising that current transportation infrastructure virtually excludes these non-conventional modes from public space. City of Toronto bylaws stipulate that the use of skateboards, roller skates, and similar equipment is prohibited on the roadway and is restricted to the sidewalk. As well, cycling laws preclude any vehicle other than a bicycle in designated bike lanes.

Naz Capano, Manager of Transportation Policy and Innovation in Transportation Services at the City of Toronto, says “the rules are meant to prioritize the safety of the users.” He also notes that allowing these modes in bike lanes could increase conflict with cyclists due to different rates of speed and types of handling.

However, limiting their use to the sidewalk can also be problematic, as users are forced to navigate through heavy foot traffic. Our sidewalks are often understood as a space for pedestrians, so activities that diverge from this norm are seen as out of place. Consequently, people using these modes can alarm other sidewalk users, especially children, older adults, and persons with disabilities. Allocating more space for them on roads could discourage their use on sidewalks, resulting in a greater sense of safety for pedestrians.

So, as people start to choose new methods of active transportation, how can we make more space for skaters, bladers, and scooters? Some municipalities have started to recognize these modes as a positive part of urban life and legitimate forms of local transportation. In Montreal, for example, cyclists and skaters can coexist legally in bike lanes. In 2015, Vancouver’s City Council introduced a pilot project to allow any non-motorized skates, skateboards, or push scooters in protected lanes. After two years with no conflict, the trial became permanent.

Given that cycling infrastructure is designed to accommodate users of various abilities, ages, and comfort levels, it should be possible to share the road with other human-powered devices without disturbing the rhythms of the roadway.

Toronto has made some strides, including the adoption in 2016 of our first Skateboard Strategy, a plan to support skateboarding in the city. But for all its value, it doesn’t address the needs of commuters. “The plan is great and is an important document for creating skateparks in the city, but it may not serve the same benefit for urban dwellers who also use skateboarding as a method of transportation,” says Ariel Stagni, a founding member of the Toronto Skateboard Committee, a skateboard advocacy group. While skateboarding as a sport rarely causes any problems, skateboarding on the street has been discouraged. “We need to think about creating additional shared space,” says Stagni.

Perhaps another way to integrate more transportation options into our city is by activating some of our underutilized spaces. Toronto is home to over 300 kilometres worth of laneways, and yet we rarely think about how these spaces can be woven into the urban environment.

“Laneways can be a safe alternative to a busy sidewalk,” says Michelle Senayah, co-founder of The Laneway Project. The non-profit’s notable Laneways as Bikeways project, in partnership with the Canadian Urban Institute, explored the potential for using laneways to connect some gaps in our cycling infrastructure. “These spaces may be key to the first/last 100 metres of our transportation network,” she adds.

Although, laneways offer great potential, Senayah notes that they are not currently designed for multi-use transport. As it stands, the lack of a continuous network and wayfinding tools can severely reduce route convenience. Optimizing these spaces would also require significant improvements in lighting to make users feel safe. Nonetheless, as non-traditional forms of active transportation continue to negotiate for space in the city, laneways can serve as viable access points.

While Toronto’s Complete Streets Guidelines promote the use of all forms of active transportation, there needs to be a larger conversation about how we can safely encourage skateboarding, rollerblading, and push scooters instead of treating them as irregular modes of transportation. We can start by focusing on the unique needs of these users and their struggles over shared space in the urban realm.

After all, as the city continues to grow, it is increasingly important to offer new methods of travel. Considering their convenience, it’s time we recognize these less-conventional modes as healthy, affordable, and accessible forms of transportation.