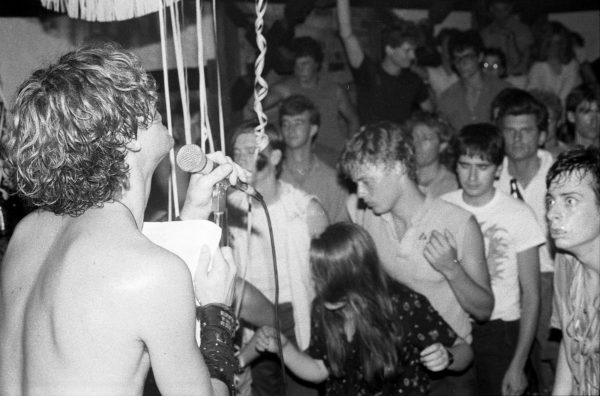 Spacing is teaming up with Coach House Books and Jonny Dovercourt to bring you a few partial and complete chapter excerpts from the new book on Toronto’s music scene from 1957-2001, Any Night of the Week (2020). Purchase your copy of the book on SpacingStore.ca

Lorraine Segato (The Parachute Club): Even though I played all over the city, it was on Queen Street that I saw the biggest changes actually rippling out, in the effect it had on the city. You had a small-c conservative government provincially. And a small-c conservative city, too. And yet you had these waves of immigrants coming in – Caribbean, Jamaican, and West Indian immigrants. You had all of these things pushing in a confluence of energies – boom, coming from every direction. And you had the fact that artists could start inhabiting empty and derelict warehouse spaces. So that’s where the culture was being born.

Quantum Coffee makes a mean cappuccino and is one of the nicest places to work downtown – if you can snag a table. The spacious brick-and-beam backroom is usually jammed full of young techies with laptops. The third-floor mansard roof is all that remains of the historical building. Wind back a decade or so, and it was Global village Backpackers, a grubby student hostel that briefly dallied with booking live bands in the mid-2000s. The building’s garish pink, blue, and green paint job was so bright you could easily spot it from the CN Tower.

Wind back another decade to 1993 in the same space, and I’m nineteen years old, standing on the stage of the Cabana room, on the second floor of the historic Spadina Hotel. My college rock band is playing our first gig. A handful of our friends are slumped over tables, drinking Labatt’s, smoking, and hoping we won’t suck. Debuting a new group or project at the Cabana became a rite of passage for young musicians through the eighties and into the nineties.

Originally programmed as a multi-arts performance space by painter Robin Wall and video artist Susan Britton, the Cabana room opened in 1979 and within a year or two moved its booking policy toward more straight-up live music gigs. Live music died there in November ’95. It was a crappy place to play, but they would book you. Bartender Jimmy Scopes did the booking – a guy from a different time, with slicked-back hair, a white button-up shirt, and a black tie. Countless new groups got their start in that tiny, beach-themed bar, thanks to Jimmy’s willingness to give fresh faces a chance.

‘Queen West’ wasn’t just about Queen Street. Though that east-west arterial hosted – and still hosts – a key handful of iconic, influential Toronto music venues, what made QSW work as an arts hub was the blocks that surrounded it. In the early eighties, the Cabana room and the Beverley Tavern – which has never gone away – were ground zero for the next generation of independent bands. Giant empty warehouses left over from the old Garment District gave artists and entrepreneurs unexpected new playspaces. ‘The street finds its own uses for things,’ said author and cyberpunk pioneer William Gibson, whose novel Neuromancer describes a fictional military initiative, ‘Operation Screaming Fist,’ named after a Viletones song.

Artist-run centres like A Space Gallery, YYZ, and Mercer Union began gravitating to the area. A block south of Queen, the Assoon brothers opened the Twilight Zone on Richmond Street in 1980, booking funk and disco DJs, launching Toronto’s storied warehouse party scene, and planting the seeds for the Entertainment District. In his self-published book “Alone and Gone,” musician/ zinester Nick Smash tells the story of a giant loft, across the street from what’s now the TIFF Bell Lightbox cinema on King, where dozens of band members lived and jammed for next to nothing, surrounded by the emptiness of parking lots and train tracks.

Brian Ruryk (the Diner’s Club, Deadlines): There was a sleeping space, or rather a place where people kind of had their bedrooms, but they were separated by a really thin piece of fabric, on a flimsy frame that divided up a larger space. And then there’d be a band practising next door when you tried to sleep! The area was really desolate. The building beside it was abandoned. it was always fun to go in there and walk around and take photos.

There was an Edge-sized hole in the local music scene in 1981. A lack of label interest and decent venues left musicians frustrated and despondent. Many had left the city for dead – or, in a repeat of the sixties, just plain left it. Two young bands, the Hi-Fis and the Hunger Project, up and moved to New York. By the mid-eighties, they would return home and evolve into Blue Rodeo and Cowboy Junkies, respectively. The first wave of punk bands had either broken up or changed styles.

Mistreated by labels and tired of the bar-band circuit, the Diodes split, half the band moving to England. Teenage Head’s momentum was stalled by Gordie Lewis’s injury in a car crash. And the viletones, to everyone’s surprise, went rockabilly. The mandate of neighbourhood-bar-as-cultural-centre was picked up by a new venue that opened in October 1981. The Cameron House, Queen West survivor, has so far dodged the wrecking ball and remains awash in vibrant paint shades. Three giant fibre-glass ants climb up the sides of the quaint old victorian building. Inside, the art-festooned walls retain the same cozy, bohemian, bric-a-brac character that, for Toronto’s creative community, has remained a comforting constant for thirty-plus years.

‘This Is Paradise,’ a sign over the bar declares, as if with a sigh of relief. The Cameron’s original owners, siblings Paul Sannella and Ann Marie Ferraro and their friend Herb Tookey, had taken over a ninety-year-old tavern with the aim of transforming it into a hub for the emerging arts and music scene. Positioned on the corner of tiny side street Cameron, the venue would commence the westward migration of the Queen Street strip beyond its previous psychological boundary of Spadina.

Ann Marie Ferraro (co-owner, Cameron House): Over the course of some chance meetings at various parties, my brother and Herb had started discussing the possibility of purchasing a warehouse space in the area and renting to local artists, who were finding it more and more difficult to find a reasonably priced space in the neighbourhood. After months of looking, they came across the realtor’s listing for the Cameron House. It seemed perfect. There were the rooms that they had wanted, plus a bar on the main floor.

The Cameron had previously been a hotel, and its upper floors soon became a literal home for artists, many of whom moved into the tiny rooms above the bar – and never moved out. It would be easy to romanticize the Cameron as a northern version of New York’s debauched Chelsea Hotel, but the less sexy reality is that its upper floor apartments anticipated the housing crisis that would affect the city, and especially its artist classes, in the coming decades. The owners let many artists live upstairs rent-free. The Cameron has since become deeply embedded in Toronto arts mythology.

Ann Marie’s musician son Cosmo Ferraro took over booking in 2010. The Government played the Cameron’s first Halloween party, in 1981. The band began to wind down the following year, having evolved from oddball art-pop into minimalist groove-funk. A new slate of younger bands had begun to emerge, defiantly independent, diy, and opposed to the commercialization of their music as ‘new wave.’ Fifth Column, Rent Boys Inc., Kinetic Ideals, Vital Sines, the Dave Howard Singers, L’tranger, Sturm Group, Breeding Ground, and Tulpa are a few of these unjustly forgotten bands.

There was an amazing diversity to the Toronto post-punk groups, as they drew on influences from reggae, funk, folk, jazz, and experimental music. If there was a weakness to this scene, it was the heavy strain of Anglophilia that infected a few of the bands.

Dave Howard didn’t need to affect an accent. His stage persona was that of a sardonic, occasionally demonic lounge singer, there to torment or amuse his audiences – and sometimes get them to get up and dance. After the split of his early no-wave group the Diner’s Club with Brian Ruryk, who continued playing his gnarly detuned guitar along with a drum machine as Deadlines, Howard started a new band, the Dave Howard Singers.

Only they weren’t really a ‘band’ – it was just Howard, an Ace Tone organ, and a Roland Space Echo. Musically, the DHS was Burt Bacharach by the way of Suicide, but taking an apocalyptic carnival ride on primitive electronic beats and repetitive keyboard figures. Howard’s deadpan humour, audience banter, crooner vocals, and cleancut, army-cadet-on-acid looks lent his shows at the Cameron and Beverley a surreal air – which intensified when he jumped into atonal screaming. With its childishly drawn cover, his 1982 cassette Alone and Gone is a lost classic of the genre later celebrated as ‘outsider music.’ Howard ended up moving to England two years later.