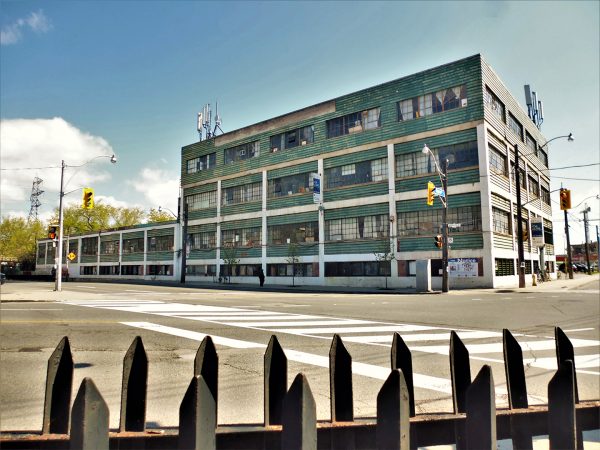 I went over to see 888 Dupont Street earlier this month. “I hope you haven’t come to criticize me,” said the old building, aware of the rough face it presents a gentrifying neighbourhood.

“Don’t be embarrassed,” I replied, as you do with old friends. The area is not fully chic yet, and we’re family here, at Spacing. There is love. “How are you doing?”

“I’m tired,” said 888. “Look at my green cladding, dented and faded.” I see red dust, even, from spalling brick, falling from under the tin.

The building’s concrete bones have always been visible, but there’s more now. “See my cracks? Are some of my rebars showing?”

Much is said without words at 888’s corner, a messy junction with Ossington.

As late as the 1990s, trolley-bus lines criss-crossed under a spider web of overhead wires. The rusty poles that carried the infrastructure remain.

Dupont Street, “so flat, long and gritty” I once wrote in Taddle Creek, makes a jog here before straightening out again. The zig-zag is a legacy of traffic engineers who spliced east-west streets that didn’t quite meet into cross-town Dupont. They wanted to speed traffic. Dupont is wretchedly busy, only a little less so during a pandemic.

I cut to the chase with 888. “In a century, you’ve had a few jobs. What was your most interesting one?”

The building’s eyes and eyebrows are wizened, expressive openings. Its large industrial windows are made of narrow steel to hold small glass panes. The sash can never have been very airtight.

Old 888 grumbles. When Dupont was lined with foundries, coal yards, bakeries, and a gear-cutting plant, when Ford Model Ts were assembled at Christie Street, in a factory designed by master industrial architect Albert Kahn, and the Toronto Telegram was printed across the street, “you wanted heat to get out, not stay in.”

The boxcar thought brought to mind one Jack Colyer.

Long ago, Colyer and his crew manufactured brooms at 888. It was no mean operation.

In 1955, The Toronto Star reported, “If a Canadian soldier near the Arctic Circle cleans his snow boots, a sailor swabs the deck of a merchant vessel in the Suez Canal, or a housewife in Nassau begins her spring cleaning today, there is an excellent chance that the brushes, mops and brooms involved were manufactured by the 100 blind men and women who guide themselves around the Dupont St. Blindcraft Industries building by means of overhead wires which they grasp with their hands, trolley fashion.”

Colyer was the sighted manager who, wrote Samuel Campbell in The Toronto Star, “can take a glance at several railway carloads of broom corn and tell you which came from Italy or Oklahoma.”

The broom, brush, and mop-making business was created many years earlier by the Canadian National Institute for the Blind, established after World War I to help soldiers lost their sight in combat and which became the nation’s leading advocate for blind citizens.

A move to 888 Dupont from quarters on Queen St. E. took place in the fall of 1952. At the first Christmas party held at the plant, “shop members provided a carol singing after dinner,” The Globe and Mail reported. A retiring broom maker Tom Murray, 76, “played the violin.”

By the mid-1950s, the factory was producing a quarter million pieces a year, a “beehive of industry,” Campbell wrote, where the blind operated such equipment as a “broom winder, a motor-driven machine that wires the corn to the handle.”

Some tasks were dangerous, though everything is relative.

A veteran “whose sight was blown away at Dieppe . . . runs a machine which staples horse hair into circular brushes.”

“In another corner another young man, who lost his sight and three fingers in an explosion when he was a boy, operates a metal-shearing machine which could take both hands off with one false move.”

Yet danger was not the reason processing corn and horsehair into brooms and brushes came to be seen as a harvest of mixed blessings.

The problem was more existential. You can pick it out in an historic fact Colyer alluded to, that broom shops “were the first industry of the blind.”

An Internet search turns up organizations still helping the blind via employment to make brooms and brushes, and caning chairs, and also to references to the blind doing so ever since antiquity.

But the age-old leg up had, in the opinion of the blind themselves, elements of a leg-iron, into which they were being snared.

Charitable organizations were exempt from Ontario’s minimum wage. In the 1960s, by which time broom-making had moved north to the CNIB’s new headquarters on Bayview Avenue, the CNIB’s broom-makers said they’d supplied enough cheap labour. Although non-union, they went on strike.

And so the “broom questions,” as blind Ruth Biron said in the 1970s, became an emblem of frustration. “She’s tired of explaining to people that she can type, file, answer the phone and run an office just as well as any other secretary,” The Globe and Mail reported 1979. (To which I add now, “what’s a secretary? And, “what about the blind who do almost everything?”)

“Well, you asked for interesting,” old 888 mused, and we go easy on the benevolents and benefactors of other ages.

“What have you been doing lately?” I asked, a bit rhetorically. Everyone knows the answer, because the location of 888 is inherently revealing.

Walking, pedalling, or speeding east in a car you suddenly see, at the jog in Dupont, the entire west façade. Are the flower pots in the windows, the incandescent lamps at night, and other signs domesticity in the relic, supposed to be a secret?

An open one. At the corner with Dupont, while standing on the sidewalk, I scratch grime from some glass and look in. I see, on the floor in the half-basement, giant bowling pins of lashed-together coloured plastic bags. At the next set of windows, I peer into a room with abstract canvases on a paint-specked floor, leaning against the walls.

What was it Jane Jacobs wrote in her bible? “Cities need old buildings so badly it is probably impossible for vigorous streets and district to grow without them.” Why? Lower rent, from decrepitude.

Just by standing there now, 888 quotes the book: “the unformalized feeders of the arts — studios, galleries, stores for musical instruments and art supplies . . . these go into old buildings.”

The lady sums up, rather aggressively, “Real ideas of any kind . . . must use old buildings.”

Old 888 rhymes off other former tasks. Well, an old picture does: it shows employees, mostly women, posed for group photo on the Ossington sidewalk. A sign over the single storey (the second and third were added later) reads “Aked worsted spinners.”

“In 1917, Thomas Oswald Aked, a general manager of the Monarch Knitting Mills in St. Thomas, Ontario, moved to Toronto to found his own wool spinning firm,” an historic report on the building, by Toronto’s ERA architects, confirms. “He commissioned William George Hunt to design a ‘modern yarn spinning plant’ at the northeast corner of Dupont Street and Ossington Avenue, at what is today 888 Dupont Street.” Which explains a “ghost sign” — the painted, now faded word “YARN” on the brick smokestack in the back.

I glanced around at the old ’hood.

Change is in the air, literally. Sets of cranes, two to a site, portend to the condominiumizing of Dupont. Even its shopping mall and McDonald’s era at Dufferin St., which succeeded an industrial age there, is over.

We suppose COVID-19 could change things. But so far, because space is running out in Toronto, grimy Dupont St. has been repackaged by developers who quote my own stories about the district’s old glories to sell new projects.

“Live, where Canada was made.” Well that’s the idea, and on Dupont there’s something to it.