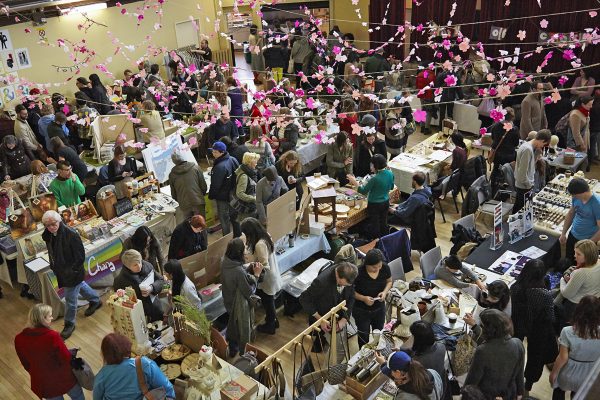 "City of Craft" fair in 2013 at Trinity-St. Paul's United Church

The long-awaited partial re-opening, which finally began in Toronto and Peel earlier this week, is a story with two aspects: on the one hand, a reunion, of sorts, with the businesses and organizations we’ve all missed in these past three months (barbers, patios, libraries), but also a reminder of the venues that won’t be coming back. All those shuttered shops and discontinued services grimly attest to the fact that we’re not going back to March 14.

A similar dynamic is playing out in the non-profit world, which has seen numerous organizations close their doors because their fundraising dried up or their services were impossible to deliver during the pandemic. Among those that hung on by whatever means, a subset is based in a thoroughly endangered species of real estate: the community spaces rented out (or in some cases donated) by religious institutions with dwindling congregations and cash flows.

Arts companies represent the single largest category of tenants, in fact. In a survey of 190 users of Toronto faith buildings released this week as part of the two-year project, almost half were engaged in cultural activities. Given the devastation wrought by the pandemic on the arts, the potential loss of this kind of low-rent space, especially for rehearsals and performances, may be the straw the breaks the cultural camel’s back.

Indeed, 60% of the survey respondents said they would have no alternate spaces available to them if they could no longer rent in a faith building. Only 12% were confident they could find new digs.

The problem is that municipal governments, including the City of Toronto, know very little about these amenities. As the study’s research lead Kendra Fry pointedly asks, “What happens if we lose an entire infrastructure system we didn’t even know existed?” It’s a bracing question in a city that is experiencing the pandemic-related loss of the arts so acutely.

Fry comes at this issue with a lot of very specific experience. After 20 years with Theatre Passe Murielle, she became the general manager of Trinity-St. Paul’s Centre for Faith, Justice and the Arts at Bloor and Walmer, home of the Tafelmusik Baroque Orchestra and numerous other professional and amateur arts organizations. Fry told me she herself is not religious. But through her work at Trinity-St. Paul’s, she has come to appreciate the intimate relationship between an historic church and the local arts scene.

The United Church and a community board jointly run Trinity-St. Paul’s, which explains its non-denominational outlook. Like many churches, its congregation is aging and shrinking, but the community uses remain vibrant.

Yet the public policy environment around this space is challenging. The church pays no property taxes, but the religious areas inside – e.g., the sanctuary — aren’t eligible for government capital upkeep grants, even though the congregation services accounts for only 8% of all uses.

(Prohibitions on the use of public funding in faith buildings in Ontario are so strict that the OTF’s backing of the “Community Spaces” study was considered something of a break through. Quebec, by contrast, provides substantial grants for the upkeep of churches, despite its secularist politics.)

Community support for Trinity-St. Paul’s is long-standing and secure (the board raised $3 million for Tafelmusik). But many others churches are de-consecrated, with the land sold off to developers, who have become increasingly adept at transforming sanctuaries into condo lofts. There are examples on College, Dovercourt, St. Clair West and Annette, to name a few.

Even if a church is transferred to some kind of non-profit entity, the land loses its tax exempt status. But Fry argues that the province could change its property tax policy to allow non-profit developers to buy faith buildings for the development of both market and affordable housing, with the proviso that they include inexpensive community-access space in exchange for maintaining the zero-rated tax status. She also wants to see the creation of an assessment tool for measuring the public benefits in a proposed redevelopment as a means of determining when the builder is eligible for that tax exemption.

It’s a smart idea, and one that fits neatly into the broader conversation about pandemic and post-pandemic resilience. There’s no question that space has been one of the central themes of this debate in the past few months. How do we manage public spaces to ensure sufficient distancing? What becomes of the abundance of vacant store-fronts in the economic doldrums that await us? And how do we think about all those offices that have sat empty for three months, and may no longer be necessary?

But resilient cities also include an abundance of inexpensive community spaces that are not quite public and not quite private. The mostly ignored inventory of such spaces identified in Fry’s study is a prime example. Regardless of your belief system, all these tread worn rooms do attest to the reality that many of the activities that make cities vibrant and livable take place outside the strictures of the market.

Fry’s research names an important source of urban resilience. We can use it or lose it.