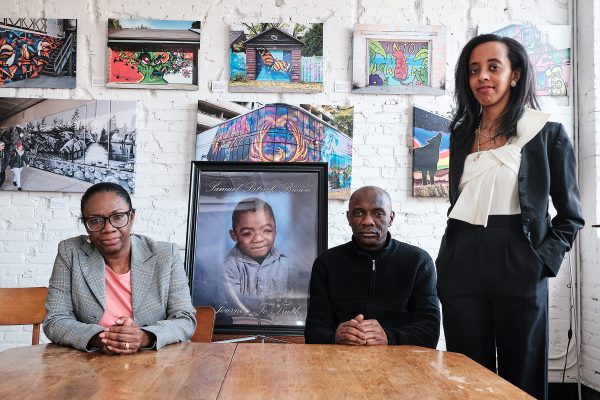 All Black lives matter. Andrew Loku, Abdirahman Abdi, D’Andre Campbell, Regis Korchinski-Paquet and numerous Black lives — which includes Trans and queer lives — whom we don’t know all died after encounters with police who were called to respond to a mental health crisis.

Social services in Canadian society are designed to fail Black folks and Black children in particular. Black children similarly face aggression at the hands of police due to a mental health crisis, or an inability to cry out for help due to a disability, or because of what is perceived to be “acting out,” such as a six year-old Black girl in Peel who was handcuffed by police because she was having a fit.

Another minor who succumbed to state violence and neglect is Samuel Brown, an 18-year-old student at the W. Ross Macdonald School for the Deaf and Blind in Brantford, Ontario. In 2018, his death drew attention in different ways than do some Toronto cases, and amongst present conversations deserves to be better known.

Founded in 1872, W. Ross Macdonald is funded by the Ministry of Education and has a mission statement that focuses on creating autonomy and assuring safety for blind and deaf students.

Samuel died in February, 2018, only four days after returning to school healthy from a family weekend. The school and the Coroner’s office both stayed very quiet about his death. Contradictory explanations surfaced, stating that the boy died of “natural causes” (according to the school) or from pneumonia (according to the hospital). Both differed from a private investigator’s conclusion. Samuel’s parents were puzzled about the reason for their son’s death and requested an inquest.

The issues around preserving Black lives are not singularly about policing. Black children are disproportionately failed by government funded and regulated systems that are meant to protect them. Samuel and other Black children have died while in the care of public institutions that are not held accountable.

Black children represent 41% of all those in foster care. They remain in care longer, are less likely to be returned to their home or adopted. Black youth, in turn, are more prone to be struggling with abuse while in care and experiencing a lack of support after aging out of foster care.

The police, educational, health-related and foster care systems all show repetitive patterns of limited resources and support to Black children who are failed out of the educational system at high rates, experience racism that affects their access to resources and labels them and their families as difficult at rates that are disproportional compared to white and non-Black and non-Indigenous youth.

The Province of Ontario is finally moving forward with removing the practice of streaming in Grade 9 that disproportionately affects Black and youth of colour after decades of complaint by those most affected. But the support Black communities have requested for decades, including more funding in vital culturally-specific programs and the original promised funding towards Africentric schools and after-school programs, has yet to be answered.

The W. Ross Macdonald School that Samuel attended was accused of inflicting “psychological degradation, physical violence and sexual abuse” onto its students between 1951 and 2012, and subsequently settled an $8 million class action in 2017.

But did the school take steps to improve its services? And in light of Samuel’s story, is an additional inquiry required?

An inquest is a judicial investigation where medical and legal experts provide testimony that confirms the facts relating to a death. They are mandatory for inmate deaths within Ontario prisons. An otherwise healthy child who dies while under the supervision of a publicly funded institution should also trigger an inquest.

After two years of community pressure, the Coroner’s office finally ordered an inquest into Samuel’s death on May 29th 2020. The inquest will look at unexpected causes of death to ensure that no explanation will be overlooked, ignored or concealed, with an eye to preventing other deaths. Special attention will be put on the care provided to Samuel prior to his death. (The Brown family’s lawyer is Saron Gebresellassi, a Toronto lawyer who ran for mayor in 2018.)

This case shows why an inquest must be called. It can provide answers about the cause of death, Samuel’s treatment and possible structural changes in public care institutions like the W. Ross Macdonald.

The two-year delay suggested the Coroner and the school have avoided taking responsibility for this tragedy and highlights the neglect and abuse of power students experienced previously at W. Ross Macdonald. A clear and prompt response could save many lives in the future.

The COVID-19 pandemic exacerbated the issues and revealed the loopholes in the system. Based on a 2017 census report, one in five Canadians 15 years-old and over live with a disability that limits their daily activities in addition to experiencing discrimination. Some, like Samuel, rely on boarding schools and long-term care facilities where the working conditions and support from the staff directly impact the health of the residents.

The Canadian Hearing Society reports possible “patterns of ignorance and oppression” in Ontario schools for deaf and hearing impaired students, suggesting the systemic nature of abuse affecting deaf and blind children’s ability to succeed. Youth like Samuel are more vulnerable because they depend on the system.

I cannot help but feel that Samuel’s intersectional identities as a young, black, deaf and blind youth played a role in making him the first (and hopefully the last) fatality at the W. Ross Macdonald School. The Macdonald School, public institutions and individuals working within them must ask themselves (and answer this for themselves): why were Samuel’s needs overlooked at the particular moment when a different staff response could have saved his life? From coast to coast, why do schools and law enforcement services under-value the lives of Black youth and mistreat them to the point of death?

Samuel’s story also illustrates the challenges for Black children within long-term care systems, such as residencies and schools for children with disabilities, and the potential impact of race on the public response from the Coroner’s office.

An inquest offers answers and allows us to take a critical look at how to significantly restructure such institutions based on the needs of deaf and blind students. Implementing mandatory inquests into the deaths of children in care, and other structural changes, would limit or prevent future deaths.

From the police system to the foster care system to the educational system, including institutions for children with disabilities, patterns of oppression have systematically targeted Black folks, starting with Black children.

One life lost is too many. Systemic violence is sustained by a culture of oppression that can be undone and unlearned. Now is the time to throw out the empty promises, collectively mourn systematic Black deaths, and implement changes in public institutions entrusted with the care and education of children.

Emilie Jabouin is a creative consultant and researcher working on her doctoral dissertation at Ryerson/York universities on Black women organizers and journalists in early 20th-century Canada. Emilie is also a story-teller and dance artist who explores the social and cultural histories and expressions of the African diasporas. Find her on Twitter at @emilie_jabouin.