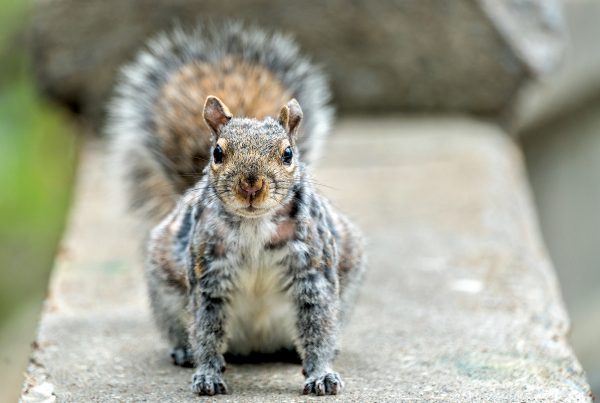 On a trip to the Rogers Centre for a Blue Jays game last summer, Catia Brito caught sight of a large grey squirrel eating on a patch of green grass below the CN Tower. A native of Aracaju, Sergipe in Brazil now in Toronto to study and work, Brito had seen squirrels before. However, this particular obese squirrel caught her eye: it was eating meat off a tossed-away chicken wing.

“It was shocking,” says Brito. A veterinarian by profession, she knew something was amiss. “Aren’t squirrels vegetarians? Them eating chicken seems wrong.”

While Brito noted the squirrel was female and, judging by its girth, possibly pregnant, the sight of a squirrel eating flesh was reminiscent of other alarming squirrel sightings Torontonians have observed. Squirrels of many sizes and colours have forever been part of the Toronto landscape, but only recently has concern about their large numbers and evolving behavior begun to take hold.

Media reports dubbing Toronto the “raccoon capital of Canada” have focused Toronto’s wildlife concerns to these black-masked mainstays. There have been numerous complaints of raccoons ruining property and growing in population. Moreover, studies from Laurentian University have shown the city’s raccoons to have severe health problems, including diabetes and obesity. While they are often feared, interest in their health is now in the public mind.

But these concerns have renewed focus on Toronto’s squirrel population as well. Residents are familiar with the various types inhabiting the city, including Eastern grey, black, red, and even the occasional white squirrel in the downtown core. Their activities are part of the day-to-day life of Toronto: they chase, climb, chatter, and grow to larger sizes than their rural counterparts. Unlike raccoons, they are seen as fit, healthy, and not affecting people in the city in a negative way.

“We’ve seen an increase in the red squirrel moving into the downtown area in large numbers,” says Paul Oliver of the Urban Nature Store in Etobicoke. “What’s more, there is now a co-mingling of the red and black squirrels, creating almost a new species right within the city itself. Overall, the red squirrels are more adaptive to the city landscapes, have more non-traditional diets, and are more aggressive.”

Yet urban squirrels often face problems living among people and human-made structures. They are exposed to the city’s garbage and foodstuffs. City activity threatens their lives, and humans threaten their habitat. Although the squirrels look athletic and healthy, some fear for Toronto city squirrels’ future and overall wellbeing.

According to McGill University’s Urban Nature Information Service, urban squirrels make themselves at home in cities by nesting in trees, and can live up to two decades in captivity, but seldom live more than a year in the wild. While they are known to eat mostly fruit and nuts, they are sometimes found to eat meat, something that’s becoming increasing commonplace with urban animals.

“This isn’t surprising,” Oliver says. “All the urban animals you’re seeing, from birds to squirrels to raccoons, are eating what’s available to them and adopting unconventional diets. Like the red and black squirrel mating, it’s something new but not overly worrisome.”

City dwellers often worry about squirrels interfering with their property and creating messes in their wake. Their diet and large teeth make them perfect weapons against any wood-based structures they find appealing, often gnawing heavily at home furnishings, siding, or window areas. Some fear of urban squirrels is justified, as the animals can carry the ‘squirrel flea’ or Orchopeas howardi. These fleas carry large numbers of bacteria that can infect roaming domestic animals, and even humans who come across an empty squirrel nest. Getting rid of these fleas requires immediate professional treatment.
Squirrels themselves are also susceptible to injury when coming into contact with humans.

“Home owners need to keep in mind a basic fundamental,” says Nathalie Karvonen, executive director at Toronto Wildlife Centre. “If you don’t maintain your house, squirrels will harm it and, in turn, harm themselves. Our rescue team has to often deal with injured squirrels caught in eaves troughs and dangling from roofs.”

Despite the number of squirrels in the city, they aren’t heavily reported to city government bodies as a nuisance.

“Only 13 reports of infestation and 28 secondary complaints related to squirrels were reported in 2018,” says City of Toronto communications advisor Angela Santos. “Unlike raccoons, squirrels aren’t seen as a major ‘pest,’ or huge agitators of garbage bins or homes.”

“You also have to consider how Torontonians relate to squirrels,” adds Oliver. “Some people still like to feed them; others like to keep them away from their bird feeders. Others have a more negative image of them and want to deal with them in ‘other’ ways…”

Whatever the positive statistics on squirrels in Toronto, some figures are not so comforting. As Santos further notes, over 3,000 dead squirrels were reported and almost 800 were reported injured. Squirrels may be in abundance within the city and its green spaces, but their safety is infringed by day-to-day traffic and new construction. Their change of diet from all-natural food to human-processed throwaways may affect their health and, as with raccoons, have negative ramifications for future squirrel populations. For some, this means adjusting how humans can deal with squirrels, as Paul Oliver concludes:
“We’re trying to get residents to control squirrel damage rather than the squirrels themselves. If you have a tree that you want to protect, don’t try and harm the squirrel. It’s easier to just put a barrier around the tree and leave the animals alone.”
All in all, without enough hard research it’s perhaps too early to know exactly how much the various squirrel populations in Toronto will change with time. They are doubtless an integral part of the city’s wildlife and new, increased interest in them will likely lead to more information about their existence within their habitat in the midst of the cityscape itself.

This article was originally published in Spacing #50 (Spring 2019)