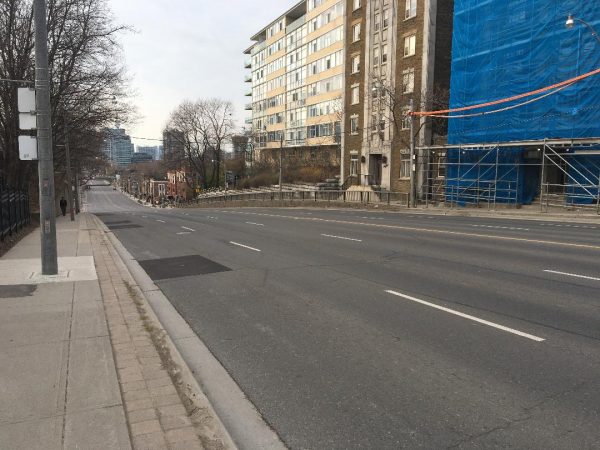 The car wins on Avenue Road. It always does.

The pattern of valuing the convenience of drivers over everything else has been fixed since 1959, when the city chopped down trees and dramatically narrowed sidewalks to create six traffic lanes from St. Clair Avenue West to Bloor Street West so as to funnel cars quickly to the downtown.

“The maintenance of maximum capacity on Avenue Road will remain critical,” an anonymous city staffer wrote at the time.

Sixty years later, that’s the Avenue Road we still have on that 2.1-kilometre stretch between St. Clair and Bloor. It operates as a virtual expressway – a de facto Spadina Expressway. Pre-pandemic, it carried 30,000 vehicles a day – 85 per cent of them travelling above the posted speed limit – and it makes life deeply unpleasant for pedestrians and cyclists brave enough to try to use it.

It survives in this form despite the arrival of Vision Zero, ActiveTO and other city programs that offer the promise of a new deal that allows cars, cyclists and pedestrians to share roads.

The sidewalks on Avenue Road are so narrow – in many cases, well below the city’s guidelines — and the traffic so fierce that walking on Avenue is like walking on a tightrope next to a highway. Social distancing is virtually impossible now, never mind when winter comes and windrows of snow are left behind by graders.

Avenue Road is incompatible with the residential nature of the areas on both sides of it and with the adjacent schools, parks and seniors’ residences and with condominiums that are springing up. And, as more Torontonians are walking and cycling to work, it becomes clearer that the road is also incompatible with the city’s Vision Zero 2.0 update that says “human life should be prioritized over all other objectives within all aspects of the transportation system.”

So, the city now recognizes the transportation policies that worked decades ago, when the car was the future, don’t work now. It has tried to find some relief for pedestrians and cyclists by instituting a so-called Community Safety Zone with increased fines for speeding, but this change has not made navigation of this stretch of road any safer.

The obvious solution is to redesign the road so that vehicles, pedestrians and cyclists can have equal access. But Avenue Road isn’t due for a major re-think until after 2045. The seniors and children, among others, who use the road today can’t wait that long.

Yes, a redesign that turns back the clock on the widening 60 years ago and gives pedestrians and cyclists equal access to the road would be controversial, but if Vision Zero is to mean anything, then the solution is easy.

A hopeful sign is that the pandemic has allowed for new thinking. We can see the result in the bike lanes quickly added as temporary projects on University Avenue and on Danforth Avenue and in the pop-up restaurants that are reclaiming traffic lanes.

Such an imaginative approach is needed on Avenue Road, but it is not coming – at least, not soon.

Three years ago, local community groups met with their city councillors to call for safety improvements on Avenue Road. This led to a review the next year that the groups deemed inadequate because it was more concerned about motor traffic flow than ensuring the safety of the most vulnerable pedestrians.

There has been some progress. The local councillors, Josh Matlow and Mike Layton, are supportive of increased pedestrian safety and the city has hired staff dedicated to the Avenue Road issue. But officials so far have offered only vague plans for a feasibility study.

That’s why ARSC has organized a small, socially distanced Safety Awareness Day to demonstrate to the city that there is strong support up and down Avenue Road for wider sidewalks. We want to motivate councillors to act now in the interests of the community to install a wider sidewalk as a pilot project. This pilot would provide all the information needed without the significant delay and save the cost of a study.

The Metro Toronto government that created the current configuration of Avenue Road no longer exists and its legacy of city planning – a high-speed road pointed into the heart of the city –should similarly be killed.

The Safety Awareness Day event, at Jay Macpherson Green at 10 a.m. on Sept. 29, will respect the Ontario government’s limit of 25 people at a public gathering but residents will also be standing along the road with signs urging quick action on wider sidewalks.

Murray Campbell is co-president of the Rathnelly Area Residents’ Association, which is a member of the Avenue Road Safety Coalition. Follow him on Twitter at @murraykcampbell.