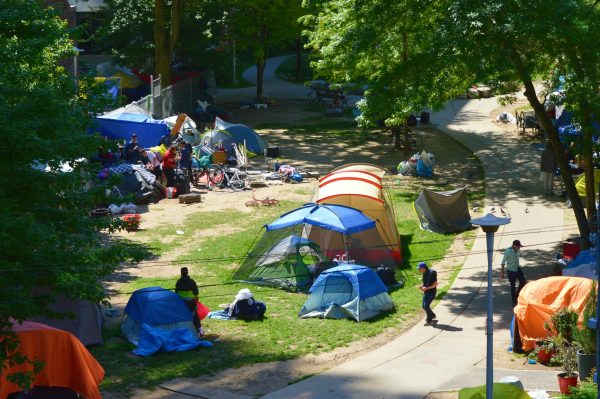 Park People’s national COVID-19 survey shows that parks have become more important than ever to Canadians during the pandemic. While many have been using parks to de-stress, get exercise, and connect with nature, a growing number have been relying on parks for shelter, safety, and even survival.

With calls to stay home, the pandemic has brought the divide between those who use public space by choice, as opposed to by necessity, into stark relief.

“COVID has exacerbated every inequality that exists in our society,” said Ruth Goba, former Executive Director of Black Legal Action Centre (BLAC) in Toronto, which has been leading advocacy related to unsafe shelter conditions during the pandemic. “We’re seeing a growth in encampments, because people are really scared of contracting COVID [in shelters].”

With COVID-19, the public health argument for policies of non-displacement has become even stronger. The Centres for Disease Control in both the United States and British Columbia have recommended that people living in encampments should be allowed to remain in place, and provided with basic amenities such as water and washrooms. The UN’s National Protocol for Encampments in Canada echoes this advice from a human rights perspective.

There is also significant public support for cities to step up these supports. Park People’s survey of 1,600 Canadians in June found that 41% would like to see better integration of services for people experiencing homelessness in parks as part of COVID-19 recovery.

Yet cities remain challenged in breaking from enforcement-centred approaches. A survey of 51 Canadian municipalities done by Park People found that, as of June, only 16% had temporarily paused clearing encampments during the pandemic.

Instead, policing of unhoused park users has intensified. A recent report by the Canadian Civil Liberties Association found that COVID-related enforcement has brought increased scrutiny of people’s behaviour in public space. This “disproportionately impacts those who rely on parks,” and especially those who identify as Black, Indigenous, racialized, or having a disability.

We’ve seen examples of this across the country. In Vancouver, multiple encampment clearances since May have seen unhoused residents shuffled from Oppenheimer Park, to Crab Park, now to Strathcona Park, which is currently home to an estimated 400 tents — underscoring the futility of displacing people from parks without appropriate and dignified housing solutions.

In Toronto, unhoused park users have been fined $880 for activities like “lingering” on benches (ticketing for bench use has since ended). In May in Montreal’s Cabot Square—an important gathering place for Indigenous people experiencing homelessness—a woman in psychological distress was met with 17 police officers and a K-9 unit, resulting in a human rights complaint.

While conversations about park safety are often centred on the perceptions of housed residents, what’s less acknowledged is that parks “can be very dangerous places” for unhoused people, said Matthew Huxley of the Toronto Alliance to End Homelessness Lived Experience Caucus. Huxley has observed that harassment and policing — by authorities or housed people — can result in people living outdoors being “frightened away from parks they would normally go to” and pushed into more precarious spaces, such as contaminated sites or under expressways.

The harms of displacement are not only physical, but psychological as well. “Whether it’s a park or under a bridge or behind a building, that place that you set up for yourself … that is your home. Everyone needs to have at least something that they can call their own so that they can feel like they are a member of society,” Huxley said.

It’s clear that the way we engage with people experiencing homelessness in parks needs to change—and there are other possibilities.

One example is Toronto’s Encampment Support Network (ESN) — a volunteer-led mutual aid group formed during the pandemic and comprised of neighbourhood committees that check in with encampment residents daily. By engaging with unhoused neighbours through activities like yoga and community BBQs, “we are trying to bridge social gaps that have long been guarded and reinforced by police involvement,” said an organizer with ESN.

“We don’t have to be in opposition,” the organizer said, but, “there’s active prejudice that obscures the possibility that encampment residents are reasonable people you could talk to about how to share space.”

Huxley agrees that “having open conversations” to work through tensions is the best approach, because sharing space is possible. In his own past experiences sleeping rough in parks, he has warm memories of a tai chi group that would arrive in the morning with coffees to share. Treating people kindly and as equals is key, he said.

The same advice applies to governments and decision-makers. Homelessness is “a hard thing to even imagine going through,” Huxley said, so “the input [of people with lived experience] is the most necessary thing you can ask for.”

While parks are no substitute for permanent housing, they are currently home to many—a reality that must be respected. Sharing space can be complicated, but the pandemic has taught us the importance of putting our most vulnerable community members first. How might we apply this lesson to parks? Or, as ESN asks, “How do we need to reconfigure our understanding of what parks are for, when people have nowhere to live?”

Adri Stark is the co-author of the Canadian City Parks Report and a project coordinator at Park People. Follow the group on twitter at @park_people.