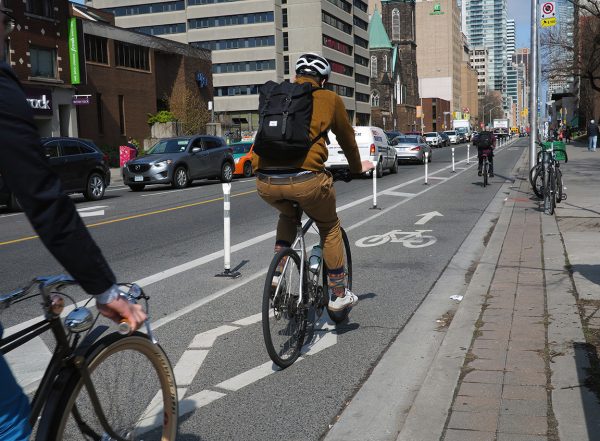 When Bells on Bloor was formed in 2007, we thought that convincing City Hall to install bike lanes was simply a question of demonstrating strong community support with annual bike parades. By 2009, our parade numbered about 2,000 riders, perhaps the biggest cycling advocacy ride in the city’s history, but it didn’t get us a bike lane. Of course, there is no precise formula for success, but here’s what I’ve learned about cycling advocacy since then:

1. It’s not about the money, it’s about the space

Cars have a monstrous appetite for road space, which makes the person on a bicycle the enemy. The motorist’s champions at City Hall happily approve expensive bike trails in parks, ravines, and river valleys, because no public road space is at stake. Bike lanes “where they make sense,” a.k.a. secondary roads that offer little utility, are similarly popular, even if at a much higher cost.

For a half century, Toronto City Hall has been a reliable source of pancakes at annual cycling events, but it still isn’t connected to a single bike lane. “Good for you” pats on the back and studies are likewise no substitute for action. Always be willing to trade a study for a pilot project or for a design and consultation plan. When studies are needed, make sure they focus on public health, equity, safety, noise, and climate instead of motorist travel times.

3. Be wary of assumptions that masquerade for facts

The status quo is often protected by lazy assumptions, such as the vital role of car parking to local merchants. Identify the assumption, then demand the evidence that underpins it, or provide your own research. Make sure that studies that support your position don’t sit on a shelf. Know the facts. And understand the difference between a bike lane to be “considered,” “explored,” or “assessed” and one that is approved.

4. Articulate a clear objective, then roll up your sleeves and pursue your goal with creativity, persistence, organization, and a sense of humour

If it’s hard to identify what you’re asking for, it will be easier for City Hall to claim you got what you wanted. Accept that most advocacy work isn’t particularly glamourous, but absolutely vital: writing letters, speaking to merchants, organizing residents, handing out flyers, etc. Don’t forget to have fun and use humour to convey your message.

5. Don’t limit the value of bike lanes to “cyclists” or “cycling enthusiasts”

Present the bicycle as transportation, the full benefits and potential of which, for a wide range of ages and abilities, can only be realized with safe road infrastructure.

Motorists have an army of their own apologists, many of them entrenched at City Hall as decision-makers, buttressed by powerful corporations, and aided and abetted by multi-billion-dollar marketing campaigns. Let the motor lobby apologize for the tragic road death and injury toll and myriad other harms. Don’t attack the motorist but challenge the automobile as ill-suited to urban life.

The bicycle can’t compete with the economic and political clout of the automobile, paving, and oil industries. Focus instead on rallying community support and building alliances to win over local politicians and the broader community. The community’s power is in its volunteers; treasure their time and use it wisely.

8. “Let’s take what we can get” can become a bad habit instead of a strategy

Demand what is needed. Let politicians figure out the compromises. Propose options, if available. Recognize that at the current pace of incremental action, we are likely doomed by heat waves and extreme weather. Don’t over-celebrate a small step forward; this may delude supporters into believing the goal has been achieved. Don’t politely wait for politicians to do the “right thing” or worry about whether they like you. Strive to be respected, while being courteous, well-informed, and honest.

9. Demand accountability from City Hall by insisting on timelines and benchmarks for action

Beware bike plans with long timelines. Ensure that plans have timelines for action, benchmarks for success, and a strategy for converting goals into action. Politicians, not city staff, are accountable to you. Note that councillors often worry more about calling out or opposing city staff, upon whom they depend for multiple projects, than rejecting your demands.

10. Know your history: when you understand how we got here you can figure out how to get out of here

Recognize that motorcars didn’t create mobility — they mostly got in the way of better options.

Albert Koehl is an environmental lawyer and a founder of both Bells on Bloor and the Toronto Community Bikeways Coalition. He has been a community advocate on issues of human rights and road safety for 25 years.