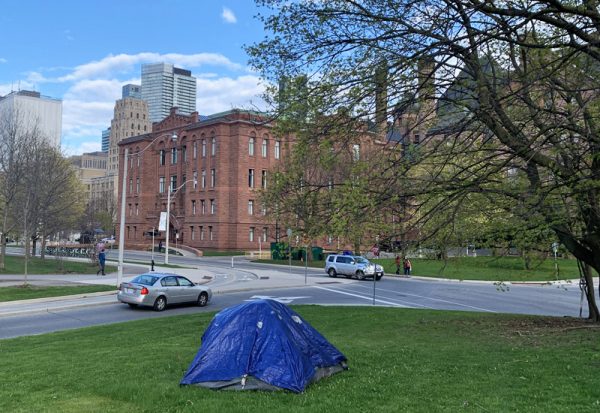 The hotel shelter program is a highlight of the City’s homelessness solution strategy, galvanized by the effects of the pandemic. In a December press release last year, the City boasted that it created 2,300 new temporary shelter and hotel spaces for physical distancing, and their Streets to Homes team, part of the Shelter, Support, and Housing Administration, or SSHA, helped move more than 1,100 encampment dwellers inside.

Amid the fanfare, the City signed yet another lease of another vacant  hotel, the 254-room Novotel on the Esplanade downtown. The hotel lease, which started two months ago, still has a 40% vacancy rate, according to Sanctuary outreach worker, Lorraine Lam. There are 7,871 people as of the end of February who are experiencing homelessness.

So, who is the keeper of the hotel shelter list? And how do referrals get through and who manages this intake?

By calling the municipal, 24-hour non-emergency line, 311, I spoke with an SSHA staff member in the Streets to Homes team who told me that the criteria for the hotels were that the person showed “Priority” and “Requirement” needs. Priority means they live in one of the four main encampments in the city: Moss Park, Alexandra Park, Trinity Bellwoods, or Lamport Stadium. Requirement needs mean they have not used a homeless service within the last thirty days; these services include respite sites, shelters, or drop-ins.

The Novotel is not on Central Intake’s list of available hotel shelters; when asked, the customer support representative did not know who managed that list.

The funnel for potential candidates for the hotels becomes increasingly narrow due to the criteria, which could be effective if not for the fact that many encampment residents have declined the offers for hotel shelters due to “fear of the institution”; shelters are not safe or hospitable spaces. They would rather be outside, in their own space even if it is a tent. Furthermore, many of the homeless, including those in encampments, do continue to use services and will often use them at least once every thirty days.

This criterion is part of the aftermath of the October 2020 Parks Bylaw injunction decision in which the Ontario Superior Court of Justice refused to grant an injunction that would have required the City to suspend the enforcement of its Parks Bylaw that prohibits camping in parks during the pandemic. This decision was important as it did not prevent the City from “clearing an encampment when shelter and housing options become available to those living in encampments.”

And so the City did, or at least tried, to clear encampments on April 6. The enforcement was overruled when news of a Covid-19 outbreak in one of the hotel shelters surfaced.

The City is seemingly prioritizing encampment residents to fill the hotel shelters over unhoused people who are not in encampments, or who are encamped in less visible locations such as the Don Valley. Presumably, the impetus is that tents are illegal in parks, as outlined in Chapter 608 of the Toronto Municipal Code. Yet public parks are a public good, which should by definition available to all members of society.

Despite the byzantine process required to get somebody accepted and then admitted to a hotel shelter, there are some who find the process worthwhile.

When Covid-19 hit, Michael, a Toronto resident, knew that his friends were not safe. However, with the City’s then-nascent plan to move the homeless into hotels to ensure safety during the cold winter months and security by way of proper physical distancing, he saw an opportunity.

Michael understood from his own experience on the streets that the key to eradicating homelessness was not hotels, or even permanent housing, but solving the relational poverty of these individuals. Relational poverty is the lack of a social safety net: your family, friends, and peers that could be your network when you are looking for opportunities such as a job or a place to live.

So, he has drummed up a list of those who he knew from his days on the street and sought to get them into hotels; for some, this would be the first time they would be inside in years. First, he says, they enter a state of shock with the exposure to a clean and empty space. But it also allows them to experience a most important period of uninterrupted sleep. Then, they enter survival mode, where it can be dangerous as “they can start to feel overwhelmed and revert back and not want to progress.” Finally, if successful, in the rationalization stage they start to build their “relational connectors.”

Michael’s approach takes time, though it has been successful for the three people that he has transitioned thus far — successful meaning that they have not rejected the hotel shelter room or left after being accepted into one, as some have through the City’s transition system.

Toronto’s band-aid solution for the encampment residents in hotels might be a short-term solution, but the process of getting to it might not lead to long-term solutions.