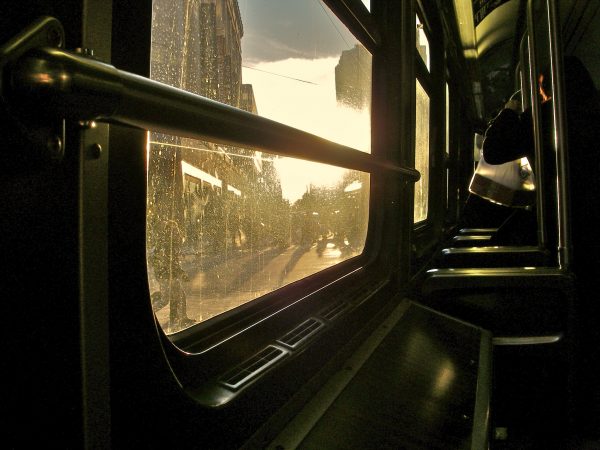 A new way of experiencing your public transit commute is coming to Toronto this year. A More Beautiful Journey is an upcoming public art project that will provide TTC riders with soundtracks of ambient music that evolve and change as you travel between neighbourhoods along streetcar and bus lines. As a part of ArtworxTO: Toronto’s Year of Public Art and the celebration of the TTC’s centennial, A More Beautiful Journey is currently in the process of reviewing applications by artists to create customized, GPS-based audio compositions that will be available to transit riders via a mobile app called Soundways. Different artists’ work will be grounded in specific locations and connected together into a unique soundscape that shifts with the city’s geography.

A jury of Toronto-based artists will choose the final group of artists, who will then have from March until May of this year to put together their compositions for their neighbourhoods. Joseph Shabason, a Toronto-based saxophonist and one of A More Beautiful Journey’s founders, stresses the project’s open definition of ambient music: “It can feel like a bit of an isolating genre term, but the way we’re viewing it is instrumental music that doesn’t have specific song forms, so that can be anything and can be rooted in any genre culture.” The call for submissions similarly highlighted interest in compositions from a wide variety of styles and influences.

A More Beautiful Journey was initially conceived by Shabason and Dan Werb, an epidemiologist and fellow musician. They were inspired by Japanese musician and composer Hiroshi Yoshimura, known for his soft, ambient electronic music. His work included music for train stations and other public spaces. Originally the concept for A More Beautiful Journey was to similarly provide ambient music in TTC subway stations, but safety concerns and limitations such as being unable to have station-specific music without lots of technological complications led the project back above ground.

“What was amazing about that was suddenly we weren’t constrained by these specific subway routes,” says Werb. “We’re talking about turning the city itself into the canvas for this huge public art project.” Bringing the focus out of the subway tunnels to the surface allows for composers to interact with the neighbourhood and its landmarks. In the words of Amy Gottung, a creative producer for A More Beautiful Journey, “It yielded lots of opportunities for responsiveness between sound and environment, which is the thrust of the project.”

An important goal for A More Beautiful Journey is to create a meaningful representation of different communities across Toronto, through composers and musicians who know their space in detail. “Who better to write music for a neighbourhood than the people who are heavily embedded in that neighbourhood, have skin in the game, know the nooks and crannies, and can think about the neighbourhood in a deep and critical way?” asks Shabason. In addition to covering over thirty streetcar and bus lines, A More Beautiful Journey has also partnered with several local arts and cultural organizations based in different areas of Toronto, including Council Fire, the Regent Park School of Music, SKETCH, Arts Etobicoke, The Remix Project, RISE, and Long Winter, in order to commission neighbourhood compositions.

It may be too early to say what the future of the project will be after the initial launch this year, but Shabason, Werb, and Gottung are far from short on ideas. “I think what’s interesting about this project is that it’s not permanent; it’s constantly shifting, it’s constantly open to interpretation, and the whole city can engage with it city-wide,” Shabason says, referring to the lack of physical infrastructure and installation involved. “There’s really endless possibility.” This flexibility allows the founders to imagine the project expanding beyond its current scope to include multiple compositions and interpretations of a given neighbourhood, and serving as an archive of musical representations of the city as it evolves over time.

After being in the works for several years, A More Beautiful Journey offers a new way of connecting a city through public art, and the project aims to merge the private and public experience in Toronto. It also represents how an individual idea can develop into a much larger effort that links diverse artists and neighbourhoods, and makes them accessible to Torontonians from all sorts of backgrounds and walks of life. Werb expresses his delight in seeing A More Beautiful Journey come together from his and Shabason’s original inspiration, saying, “This is a project that encapsulates the journey from a total kernel of a ‘what if?’ idea into something that is actually real.”