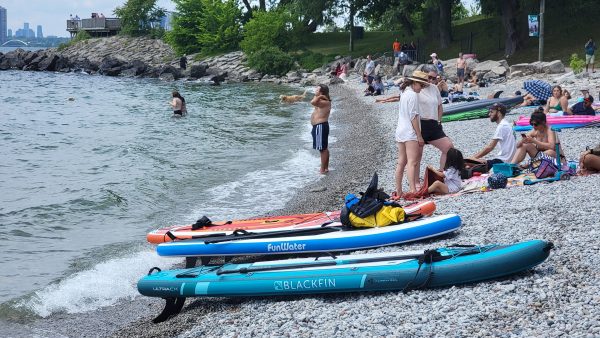 Downtown Toronto’s only beaches adjoin Ontario Place, where we swim year-round, even in winter. The most magical of these is Teachbeach, a sandless (sandfree) pebble beach with crystal-clear waters where we swim, conduct scientific research, and make underwater music videos that celebrate the water clarity.

No other beach in Toronto has that degree of water clarity! This beach has unique artistic and scientific properties that make it of special interest to many of us.

Some members of our group also have special needs, and the absence of grit or grime is friendly to prosthetics and other technologies that would be easily damaged by even a few grains of sand. A USB port on a smartphone can be destroyed by a single grain of sand, and mechanical linkages like adjustable paddleboard paddles, cameras, tripods, wheelchairs, prosthetic devices, etc., are easily destroyed by sand.

Teachbeach is Toronto’s only sandfree beach. You can just throw your clothes on the pebbles without the need for a beach blanket. In other countries, special parks are made where people can walk barefoot on variously sized pebbles. But here, we have this luxury for free in a totally natural and sustainable way. Many of us run barefoot back and forth along the beach pebbles every day, and we sometimes bury each other in pebbles — like psamotherapy, which is the therapeutic use of beach sand, but with no mess to clean up afterwards.

The geological characteristics of Teachbeach make it an area of natural and scientific interest, and artistic interest to many of us. There is a special microclimate owing to the south-facing, wind-sheltered nook that also makes Teachbeach look and feel like the Canadian north:

“Blue lake and rocky shore, I will return once more…”
–Land of the Silver Birch, Canadian folk song 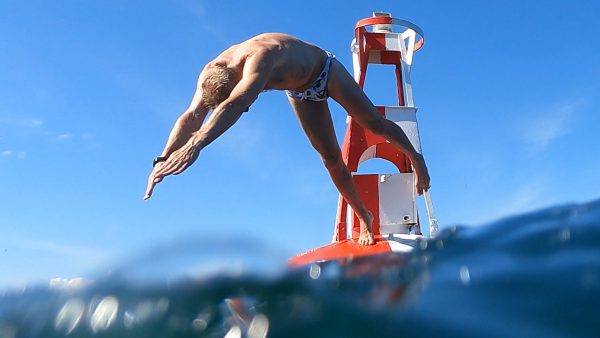 The beach is isolated visually and acoustically from the noise of the city, and one can easily imagine that one is in the far north, like Gravenhurst or Lake Temagami.

I’m a professor at University of Toronto, as well as one of the thousands of people who swim there. We have a Facebook group with over a thousand members, but many of our group don’t use Facebook or social media at all, so the membership is probably a lot higher.

We formed the group in response to Ontario Place security guards (Neptune Security Services) telling us we’re not allowed to swim, i.e. as if Neptune was the God of “NO SWIMMING”.

“We do not want to queue up and pay for a swim, we want to swim as people walk: at 5am, for three minutes, at midnight, for hours…” — Kate Rew 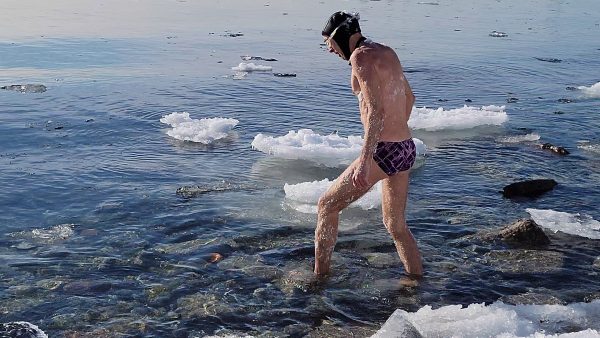 For many of us, ice water swimming (and swimming in general) is a necessary intervention for physical, affective, and mental health and well-being. Many people have switched from drugs and medication to the healthy benefits of cold water swimming.

Open water swimming is really about freedom. It is a human rights issue, i.e. the right to access clean safe swimming waters.

SwimOP is a safety advocacy group that also develops technologies for aquatic safety in affiliation with the Water-HCI (Water-Human-Computer Interaction) initiative. As a community, we have worked together to clean up the beach, removing thousands of pounds of sharp jagged steel debris, concrete rebar, and other items. What we could not pull out ourselves, we got together a team of volunteers on land to pull with large ropes. We swam down to tie to the items to be removed, first using SmartSwim technology to build a 3D underwater map of the hazards. We also do advanced scientific work, and Teachbeach is our living lab and classroom. 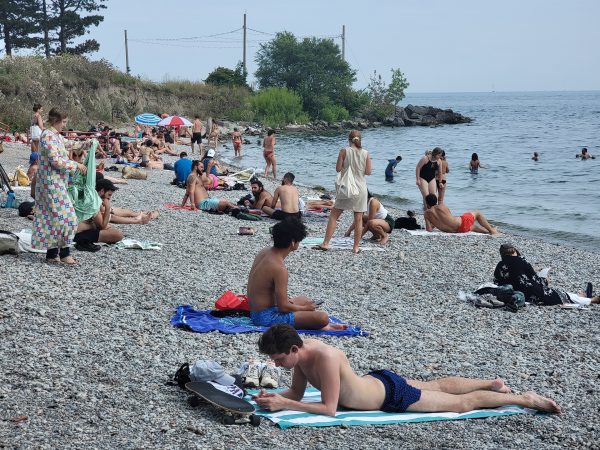 We have concerns with the recent development proposals that would replace the large pebble beach with a dangerous steel wall, straight drop into the water, in favour of a smaller sand beach on the west-facing side of West Island, right next to the traffic of Lakeshore Boulevard. This new location is in the `armpit’ of the break wall, situated right next to a combined sewer outfall (CSO), where the stench is often unbearable and the debris includes condoms, tampons, and other detritus.

Why replace Toronto’s cleanest beach with a smaller dirty beach?

Downtown Toronto’s only access to the water’s edge is via Ontario Place. In this sense, Ontario Place is the world’s water capital, and should thus be all about safe water access around its entire perimeter, just like Toronto Island’s beaches, which are outside the downtown and harder to access.

The beaches of Ontario Place should be preserved, not replaced with dangerous steel walls like “Sugar Beach” and “HTO,” which are dangerous and unbecoming of what a great city should be.

Let us preserve Teachbeach as-is and bring the other Ontario Place beaches up to this same level of cleanliness and accessibility, i.e., the entire shore of Combeach as a nice natural pebble beach, the entire shore of Bud Beach, and of course Echo Beach, so that it can live up to the wonderful song that was written about it: 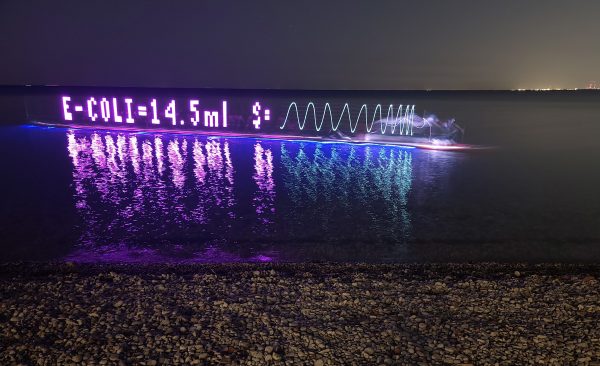 Presently, Ontario Place is characterized by fences, chains, padlocks, limited hours, and 24-hour security guards stationed to keep people out, i.e. not what we’d like to think of when we think of public space.

Expanding Ontario Place and making it more popular might bring larger crowds, and thus create the need for more beach space. If this is to be done, we must have all of the existing beaches brought up to the same standard as Teachbeach, and add others.

For example, East Island Beach, with its wonderful view of the CN Tower, needs some clean-up, of sharp rebar and other items, to make entry safer. The break wall and the West Channel (site of the Pan Am Games and also a common triathlon swim course) are also places where lots of people swim, with distances marked off at 100 metre increments, in Roman numerals, for time trials.

We also paddleboard regularly with swimmers for safety. When we swim the “Teachlin” (Teachbeach to Hanlin’s Beach at Toronto Island), for example, we surround the swimmers with paddleboards for safety.

As a community we built an outdoor classroom and living lab at a beach that occurred accidentally by nature itself. Let’s work together to preserve it, and expand in time and space to safe water access all around the perimeter of Ontario Place 24 hours a day, just like many other great beaches that never close to the public. If this is public space, our space, and a cottage for those without summer cottages as is often said, a midnight swim should not result in police and security guards calling it “trespassing”.

Steve Mann invented the SWIM (Sequential Wave Imprinting Machine) in 1974 to allow people to interact with wave computations, and with each other, in air, underwater, and in solid materials. SWIM was the first example in the new field of Water-Human-Computer Interaction (WaterHCI.com). Join him at facebook.com/groups/swimop