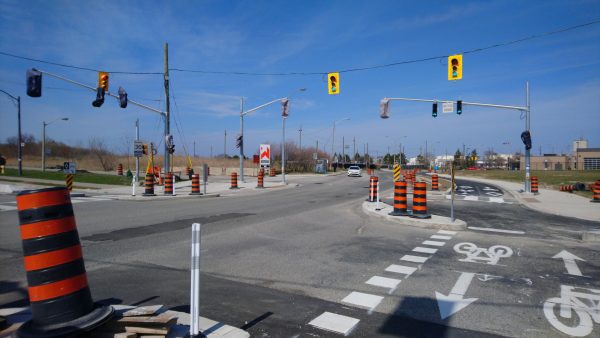 Torontonians will be off to the polls on Monday, October 24 in an election that will see significant turnover, with seven councillors not seeking re-election. This is a great opportunity for road safety advocates to demand greater investments in Vision Zero, along with pedestrian and cycling infrastructure. First, it’s worth looking at what Toronto has accomplished during Mayor John Tory’s eight years in office.

Three different bike plans were approved during Tory’s tenure. The first is the Ten-Year Cycling Network Plan approved in June 2016 – five years after the failed 2001 Bike Plan expired that saw only one quarter of the proposed 495 kilometre bikeway network get built. Bike lanes on Birchmount, Pharmacy, and Jarvis were removed soon after Rob Ford took office, though his term did see the city’s first separated bike lanes installed on Sherbourne, Wellesley, and Richmond-Adelaide.

Despite the setbacks faced under the Ford administration, the record Tory leaves behind after two terms is nothing to be inspired about. Since 2015, the Tory administration managed to install 95 kilometres of bike lanes with another five kilometres possible before the year is over. Having fewer than 100 kilometres installed over two terms – more than half of which were prompted by the global pandemic – is nothing short of embarrassing. Especially when far smaller cities such as Seville managed to install 80 kilometres within 18 months. It all comes down to a lack of political will within Toronto city council.

Here is a breakdown of how Toronto fared compared to the three most recent bike plans:

While Toronto got close to meeting their 2019-21 plan target, we can’t forget the role COVID-19 played. The 30 kilometres Toronto managed to install in 2020 wouldn’t have been possible without the ability to divert resources from other City departments. This year’s eight kilometres of installations so far gives the impression Toronto is returning to its pre-pandemic ways.

Despite Tory’s track record in absolute numbers, there is some good news to be found. December 2021 saw the 2020 ActiveTO installations made permanent except for the Brimley bike lanes, which were removed after five months. This included the 16 kilometre Bloor-Danforth bikeway, which was recently extended east to Victoria Park Avenue, as well as University Avenue, which mirrors the Line 1 subway. Suburban bikeways such as those on Wilmington and Huntingwood were maintained, while Toronto got its first protected intersection this year near York University. The Midtown Yonge Complete Street Pilot – installed in July 2021 – has seen cycling numbers triple on some segments since installation, while a decision on whether to make it permanent is expected to be made in January 2023. The Yonge4All campaign was started this summer with a focus on making the Midtown Yonge pilot permanent and has reached 2,200 signatures at the time of writing. It speaks to Tory’s lack of commitment to road safety (and the city’s climate plan) that cycling and pedestrian improvements on Yonge – which has a subway line – require such exhausting debate.

This past year has seen a record number of cycling-related public consultations that could lead to more bike lanes being built in 2023 and beyond. These include the Durham-Scarborough and Dundas Bus Rapid Transit proposals, the Queensway Complete Street, eglintonTOday, the Overlea bridge, Sheppard Avenue, and the Mid Humber Gap (just to name a few). Per Councillor Mark Grimes’ last newsletter before the election, public consultations for a further extension of the Bloor bike lanes could happen this fall, while the City of Mississauga is studying bike lanes on their part of Bloor.

Candidate Commitments for the Upcoming Election

Ahead of the election, the Toronto Community Bikeways Coalition (TCBC) will be organizing a road safety rally on Sunday, October 2 and has articulated the following three calls to action from council candidates.

A TCBC-supported survey is also being prepared for candidates for public office, while a “Heads Up” portal will be launched to show voting records, KSI data, and reasons why it’s important to vote in this election.