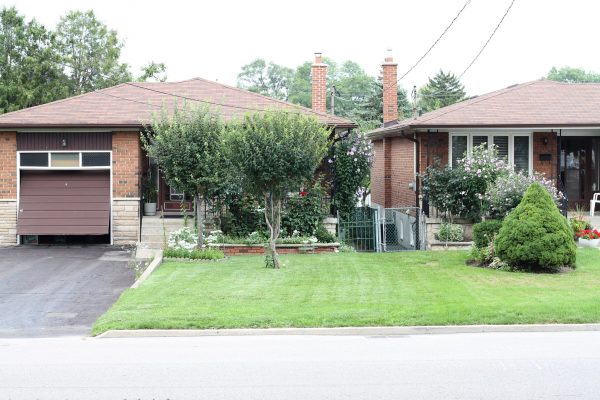 City council has spent the past few years chipping away at the walls surrounding that seemingly impregnable fortress otherwise known as Toronto’s Stable Neighbourhoods, with incremental moves such as allowing rental laneway suites and, just recently, an official plan amendment allowing small-scale retail in neighbourhoods.

These moves are part of the Expanding Housing Options in Neighbourhoods (EHON) strategy, which, at least in theory, aspires to add new forms of gentle intensification — a.k.a. the missing middle — into neighbourhoods that consist predominantly or even exclusively of single-family homes (most of which are in the post-war inner suburbs).

To give credit where credit’s due, Mayor John Tory set this process in motion back in July, 2019, with a, well, motion, seconded by council’s outgoing housing czar Ana Bailao, that asked chief planner Gregg Lintern to ante up “housing options” for neighbourhoods.

That vote occurred half a year before the pandemic, and came at a time when the new council was still in the warm glow of the mayor’s campaign, now seemingly stalled, to drive the development of new rental housing on city-owned lands.

It feels like an impossibly distant moment. The bureaucratic slogging since then has produced a solid foundation of planning research and public consultation, but only a handful of concrete results: a pilot project in the Beaches, and a proposal to allow the addition of so-called garden suites — known everywhere in the universe as accessory dwelling units — in the backyards of houses. Residents organizations launched an entirely spurious effort to derail the policy at the Ontario Land Tribunal, which failed earlier in the summer, and these dwellings are now allowed across the city, subject to various regulations governing set-backs, height, etc.

Less encouragingly, council last year shot down a completely sensible proposal to legalize rooming houses across the city. Council then mumbled its way out of taking a vote on the most potentially consequential piece of this whole planning reform effort, which is an official plan amendment that would allow, as of right, the construction of duplexes, triplexes and fourplexes in any neighbourhood. The planning department anted up report on this move, and the text of a draft OPA, and that’s where things stand today.

It’s always important to talk precisely about the missing middle agenda, which increasingly dovetails with growing calls to end exclusionary zoning in residential neighbourhoods. Such reforms mainly shift the upper end of the rental market, as has been the case with most of the laneway rental that’s been developed in the past two years.

In the long-run, however, such measures will help re-populate house neighbourhoods that are aging, shrinking and wildly out of range for most families, young couples, tenants, etc.

Yet this piece of the housing reform agenda will make little difference if we also don’t add more affordable rental across the city, strengthen rules governing renovictions, use public funds and public land to build deeply affordable and supportive housing, and enforce the inclusionary zoning regulations passed last year by council.

None of these fixes are mutually exclusive, but the key benefit of the missing middle reform is that it will erode the entitled assumption that house neighbourhoods, which consume a disproportionate amount of space in Toronto, are only for houses, and therefore gated.

There’s not been a huge amount of debate about this topic in the election so far. 8-80 Cities founder Gil Penalosa has pledged to go beyond the planning department’s recommendation, and allow up to six units per residential lot, as well as offer cuts to development charges on such projects.

Tory’s position is somewhat more ambiguous: his publicly released five-point housing plan, which to date is as much detail as he’s offered up on the housing file, says he would “[expand] housing options by permitting `Missing Middle’ housing, and allowing greater mid-range density on major roads and in areas served by transit.”

I asked his campaign for clarification on whether he supports the draft official plan bylaw, which would allow multiplexes in any neighbourhood. According to a statement from Tory’s spokesperson Jenessa Crognall, “the mayor supports the Draft Official Plan amendment. The Mayor’s five-point housing plan commits to legalizing ‘missing middle’ housing, which includes duplexes, triplexes, fourplexes, walk-up apartments mid-rise developments.”

Crognall didn’t say why these details are omitted from the five-point plan, such as it is, but the answer makes his position clear.

The question is, what happens next? A new council can re-open decisions made by a previous council. In theory, if there’s a new group of councillors with more strident views on this issue — which tends to attract nearly hysterical responses from some residents’ groups — council could slam the breaks on the multiplex reforms, as well as the other changes associated with EHON.

Another intriguing scenario is whether Tory, if he wins, will use the new so-called strong mayor powers to push through the remaining elements of the EHON reforms, including the ones focused on allowing multiplexes, arguing that it’s a provincial priority. There’s a lot of accumulated evidence that the provincial government is interested in ending exclusionary zoning. Premier Doug Ford’s powerful housing minister Steve Clark has said as much, as have proxies, like the government’s own housing taskforce and the Toronto Region Board of Trade.

Yet such a shift is so seismic that I wouldn’t be at all surprised if the city and the province cooked up a deal to slow walk the land use planning reforms that would dismantle exclusionary zoning or at least subject them to yet another season of analysis. After all, both Tory and the Ford government know they are deeply beholden to affluent homeowners, as are the majority of members of city council. So we’ll see. Don’t put money on it yet.

The `what’s next’ calculus should also include some serious thinking about affordability and unintended consequences. A handful of U.S. cities — Minneapolis, Seattle, Chicago — have up-zoned residential neighbourhoods in recent years as part of an effort to address the historic racism baked into the municipal zoning laws of so many American cities.

The early results are mixed. A 2019 study looking at zoning report, property values and housing construction in Chicago found that residential real estate prices had gone up in the wake of the changes, but the reforms hadn’t sparked new housing construction.

In Minneapolis, which ended single family zoning for its 2040 plan, a 2021 evaluation published by the Journal of the American Planning Association found that the policy had led to a 3 to 5% increase in prices, and surfaced some evidence that these moves might spur gentrification in inexpensive neighbourhoods. As the authors cautioned, “Planners should thus be sensitive to how this type of change can affect housing affordability and housing stock diversity.” (A court earlier this year actually halted the implementation of Minneapolis’ 2040 growth strategy after a coalition of naturalist groups challenged the plan, claiming that the up-zoning would produce massive environmental damage.)

Such concerns are more thoroughly canvassed in a recently published study by City Building TMU and U of T’s School of Cities. “For new development, deeply affordable rents will likely require a density bonus-type approach with development charge waivers or deferrals, and elimination of parking requirements in order to achieve affordability,” according to an evaluation of missing middle costs and affordability, written by a team of architects and policy-makers and published in 2020 by the Urban Land Institute. “The City could explore an agreement with landlords where rental rates and tenure length are guaranteed in exchange for these waivers and exemptions.”

The TMU/School of Cities study proposes the establishment of a missing middle charter designed to push governments to be highly intentional about such reforms, with an eye to promoting affordable and equitable gentle density and discouraging a further acceleration of housing inaffordability.

Their charter includes a lengthy to-do list for all three orders, from reforming building and fire codes to expediting approvals, simplifying design and even offering owners federal incentives to add units in exchange for maintaining affordable rents on the units being added.

That last point certainly bears some discussion: should federal dollars earmarked to prime the affordable housing pump go to such small-scale projects or are they more effectively used to lever municipalities to build affordable rental on public land?

Nevertheless, the TMU/School of Cities charter raises many important questions about a major change in the way the city regulates the evolution of house neighbourhoods, and why residential zoning reform on its own, though necessary, may not be sufficient.

It remains to be seen whether the next mayor and council have the stomach for this debate, but these are the questions they’ll have to answer if they do, indeed, want to inject the elusive missing middle into Toronto’s achingly exclusive residential neighbourhoods.