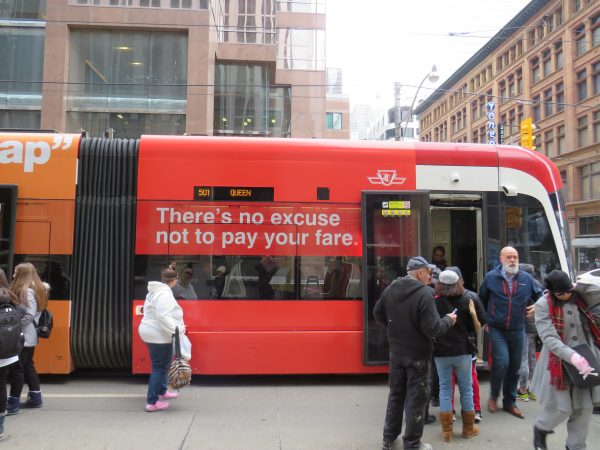 Once upon a time, in a land not so far away, Toronto’s local politicians had ambitions for local transit. The topic was debated, often intensively and at length. Plans were bruited, consultants were consulted, arms were twisted, and deals got done, or (often) not, as the case may be.

Those halcyon days, however, are long gone, as the current election campaign can attest. The Ford government, with Mayor John Tory’s blessing, has hoovered up responsibility for all major capital projects and with it most of the necessary local debate about transit expansion.

The City’s most influential transit bureaucrat you’ve never heard of is no longer the TTC’s chief general manager, who (once upon a time) was a mandarin of substance and influence. In his place is a tall guy named Phil Verster, who has headed Metrolinx since 2017 — a period that has seen the Eglinton Crosstown, that Wagnerian opera of a megaproject, delayed by two full years. He earns $836,961 (not including benefits), making him Ontario’s sixth highest paid civil servant, and he is tasked with building all rapid transit in Toronto (and much of the GTA) for the foreseeable future.

In the silent movie that is masquerading as the 2022 election campaign, there’s been little said about transit. Tory has boldly committed himself to seeing through all the projects that Metrolinx is building, and is taking credit — in some cases with justification — for a grocery list of other moves, from the King Street pilot project to the Eglinton East dedicated bus lane.

It’s worth itemizing the provenance of the big projects on Tory’s $28 billion list. The Scarborough subway extension is, as we all know, Rob Ford’s baby. The Ontario Line, aka the Relief Line, is an idea that dates way back to Paul Godfrey’s Metro in the mid-1980s, and which Tory, running for office in 2014, shunned in favour of a napkin doodle he called SmartTrack (MIA).

The Eglinton Crosstown West extension first appeared on David Miller’s Transit City plan (2007), as did the Finch LRT. And the Yonge North subway extension was the handiwork of a York Region energizer bunny named Bill Fisch.

Will some future mayor be able to cut the ribbon on a rapid transit project that John Tory pushed and cajoled into being? Unlikely. He assures voters that “planning is underway” for the Eglinton East and Waterfront LRTs, but the City still has no plan for funding either of these projects, and presumably has no intention to, given that we’ve handed over fiscal responsibility for transit to the folks at Metrolinx and Infrastructure Ontario.

Gil Penalosa’s alternative, dubbed “Fast Line” is interesting and important, but less ambitious than it should be. His platform calls for adding 62km of separated, high-speed bus lanes and another 30km of bus-only lanes on Finch, Sheppard, Jane, Dufferin, Bathurst, and Eglinton East (to Malvern), the latter as an alternative to the $4 billion LRT that at the moment represents council’s approved plan for that corridor.

There’s a rock solid case for building a network of high-speed, high-frequency buses operating in their own rights-of-way. It’s cheaper, greener, and more easily constructed than our rapid transit mega-projects. The City has been tinkering with a bus rapid transit network, dubbed RapidTO, but the exercise lacks any evidence of urgency.

Penalosa estimates the cost of his proposed network will be $3.2 billion (2022$). He thinks the City should only pay for half of the capital outlay, and intends to finance the municipal share by, well, re-spending the Scarborough subway levy and allocating a portion of the savings from cancelling the $2.3 billion earmarked to shift the Gardiner Expressway.

Conspicuous by its absence from Penalosa’s plan is any mention of an LRT for the eastern waterfront, which would surely become one of the most cost-effective rapid transit investments in Toronto, given the density of the neighbourhoods planned for that area. Indeed, if Penalosa genuinely intends to kill the ridiculous Gardiner rebuild, a waterfront LRT is the obvious place to shift that investment.

It’s also telling that neither candidate’s platform has much to say about the TTC’s operating budget, which received a massive assist during the pandemic from both the federal and provincial governments. In 2021, when ridership was still quite low, those transfers exceeded $460 million, with the City’s subsidy effectively equal to fare revenue ($851 million). In before times, the City subsidy was more like a quarter of overall revenue.)

A TTC spokesperson says the feds and the province have yet to determine the amount of their combined pandemic bail-out for 2022, but it will be interesting to see how much will be forthcoming. The TTC, which is now operating at about 55-60% capacity, has forecast that the ridership shortfall could cost $375 million for this coming year, and it’s by no means clear who’s going to foot that bill.

Both Tory and Penalosa’s platforms are silent on the age-old question of whether they’d be willing to increase fares or raise the City’s subsidy to the TTC in the event that the emergency pandemic support from the other orders dries up, as seems increasingly likely.

Asked whether Tory favours a fare hike or an increased council subsidy if that funding doesn’t materialize, a spokesperson said in a statement, “We’re not going to speculate on a hypothetical question. The Mayor will continue to advocate to the federal and provincial governments and is focused on securing this funding, as he has successfully done the past two years.”

Faced with those same choices, Penalosa, by contrast, says he won’t raise fares, and would instead seek to increase council’s contribution. “Fares are already too expensive,” a spokesperson said in a statement. “A larger percentage of the TTC’s funding comes through the fare box than any other transit system in North America. I will not raise the cost of a TTC ride for already overburdened users… If senior levels of government don’t make up the shortfall, whatever gap is left would be funded by City transfer.”

Neither, it’s worth noting, seems to be arguing that the province and the federal government should implement a permanent operating subsidy to the TTC, which is a table stakes transit policy in just about every other major OECD country.

And so goes our transit story, stumbling into a muted future characterized by the slow proliferation of preposterously expensive subways and critical surface lines that will never get built. I’m all in for Penalosa’s buses, but they should only be the first stop on a far a longer journey.